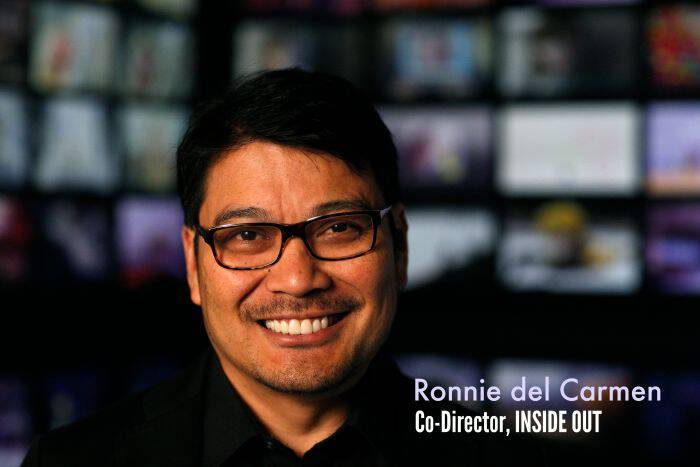 I have my last bit of #InsideOutEvent insider coverage for you today from my trip to Pixar in early April. I’m so excited that INSIDE OUT will be in theaters this Friday! I can’t wait to take the family (and probably an entire box of tissues for myself).

Ronnie del Carmen is the Co-Director of INSIDE OUT and was so interesting to chat with about a movie is brainstormed into a full-fledged plot from just an idea, and how you really bring it to life from there to the big screen. 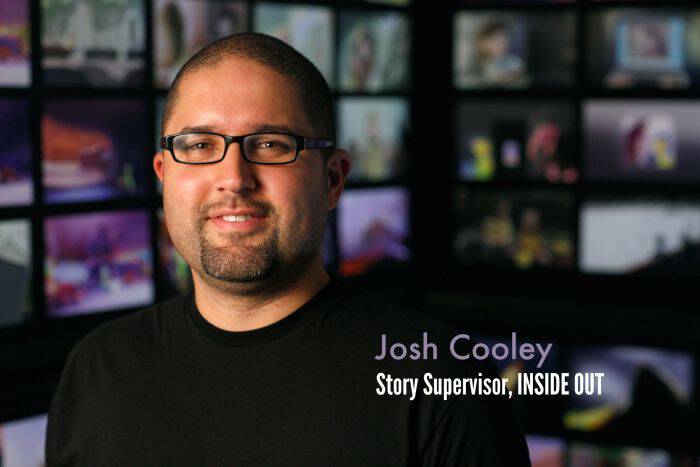 Josh Cooley is the Story Supervisor of INSIDE OUT and he gave us some great insight about how the characters and story are developed. Josh has a little girl of his own who actually voiced a very young Riley in the movie. Listen for that when you’re watching! 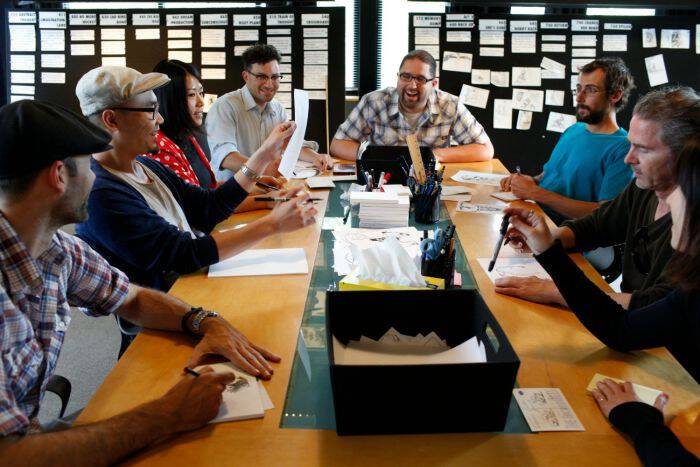 And I love how they did it. They sat together and told each other stories about their kids and their emotions. Pete would tell Ronnie stories about his daughter Ellie and Ronnie would draw. Then they tackled questions like how would it feel to BE joy?

The main laboratory for this movie was to go inside of their own experiences as parents. Wouldn’t we all have like 6 million movies worth of material?

That’s why a lot of the moments in the movie feel like it’s every family’s story. – Josh Cooley, Story Supervisor

Once they have all these stories and ideas, they put them together in a story board sequence that looks like this one on the wall behind Josh. Kind of like a comic strip.

The team writes, draws, and tells each other the story, but it doesn’t come alive until you “pitch it with the stick.”

” This is when you find out if you care what happens. Is it fun? Should we cut it down?” – Ronnie del Carmen, Co-Director INSIDE OUT

Ronnie also told us that voice actress Amy Poehler was a huge influence on the character of Joy. It’s hard to create a character that’s happy all the time but not annoying!

Once we learned how the story goes from ideas to paper, Josh took us through a lesson to learn how to draw Anger. It’s amazing how someone who really knows what they’re doing can break it down into small steps that allow anyone to draw relatively well.

I’ll leave you with this quote from Ronnie and encourage you to take your family to see INSIDE OUT in theaters. It comes out Friday June 19 and is going to be incredible!!

“I’ve never made a movie that is as rich and expansive as this.” – Ronnie del Carmen, Co-Director, INSIDE OUT

Inside Out – Official US Trailer 2

Remember INSIDE OUT comes out in theaters on June 19.

Be sure to also check out my pictures from my tour of Pixar Studios and my high-energy interview with Ralph Eggleston, the Production Designer.  These interviews on how they ‘staged’ and lighted this animated film are so interesting too.  My interview with the film’s animators explains the process for finalizing each scene. BONUS: Short film LAVA plays before INSIDE OUT and is absolutely adorable! If you’re ready to load up on INSIDE OUT merch, this is where to shop. I have two mugs that I LOVE LOVE LOVE!  Finally, get the kids geared up to see this special movie with these fun free printable coloring pages and activity sheets!

INSIDE OUT hits theaters Friday June 19!

How INSIDE OUT went from an idea to the screen! In theaters FRIDAY! http://t.co/rgo9OLWynZ #InsideOutEvent #InsideOut pic.twitter.com/Wa2OxhuSUR