So excited to share my next bit of #InsideOutEvent coverage with you today.  I love when Disney puts a bonus short film in front of their feature films and INSIDE OUT is going to be doubly awesome because of LAVA, the short film playing before the movie. I had the chance to see it and it’s just adorable. 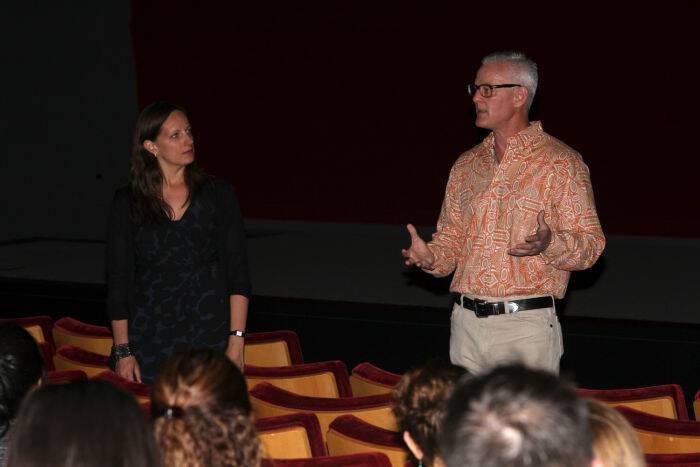 This picture was taken in the theater at Pixar Studios in San Francisco where Producer Andrea Warren and Director James Murphy introduced the film to us. One of the first things they said? They can’t be responsible for our vacation costs after watching LAVA. ha! It really does make you want to just go find a tropical beach. In fact, after making the movie they counted 20 people from Pixar that went on Hawaiian or tropical vacations!

Inspired by the isolated beauty of tropical islands and the explosive allure of ocean volcanoes, “LAVA” is a musical love story that takes place over millions of years. 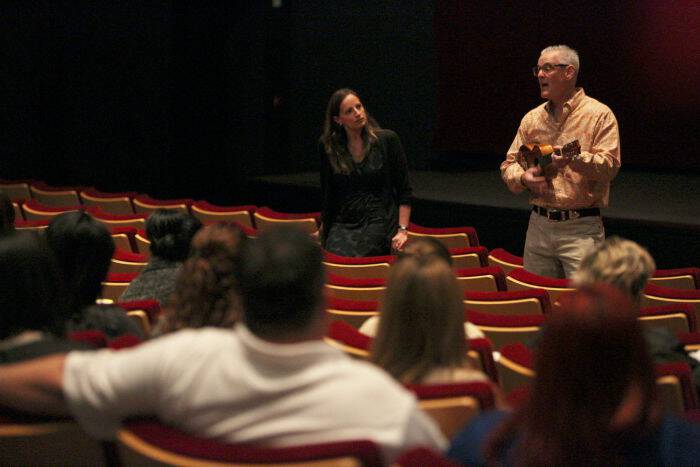 The entire short film is a song, a musical, that tells the story of a volcano. Let me tell you, it’s entirely possible for a volcano to be adorable. James played the song for us on the ukulele and sang. The audience was mesmerized. It’s so special. I adore this story.

So how did this story come to be? James really wanted to pitch some ideas for short films for things he really, really loved. He had honeymooned in Hawaii and fell totally in love with it – the Hawaiian music, the tropical location, all of it.

After coming home he heard Somewhere Over the Rainbow sung by Israel “IZ” Kamakawiwo’ole in an epsiode of ER. I was hooked on ER for a short time after my daughter was born and I remember this episode like it was yesterday, the episode where Dr. Greene died (sob!). I have that song on so many of my mixed CDs. Love, love, love. Have a listen above.

The song stopped James in his tracks and he became obsessed with Hawaiian music (driving his family crazy in the process!). He set out to develop a song that made him feel this way and with Producer Andrea Warren on board, he promised Executive Producer John Lasseter that this song for his short film would be sung by traditional Hawaaiian singers.

And in the end, this “giant little love story” as James described it, was told through the voices of Hawaiian singers Kuana Torres Kahele (voice of Uku, the male volcano) and Napua Greig (voice of Lele, the female volcano).  It is sweet and gorgeous and might just bring a tear to your eye in just 7 minutes.

After watching LAVA and the first hour of INSIDE OUT, Pixar treated us to a Hawaiian-themed reception. You guys, the food. I’m moving to Hawaii. Yesterday.

So amazing. There was seared tuna, some kind of seaweed chips, pork something-or-other. I really should have taken pictures of the little food labels. I went back for seconds. Amazing, amazing. And really made me FEEL this film even more.

Pixar is such a beautiful place! This was the view from above of the reception. See? I couldn’t get in there and take pictures. We all wanted to get to the food! You can actually see me in this one, near the middle with my back facing the camera, green scarf around my neck. Almost didn’t catch myself in there!

Don’t be late when you go to see INSIDE OUT on June 19. LAVA is not to be missed. It’s emotional, sweet, and has a great new catchy tune I promise you’ll love. “I lava you!” will be heard far and wide in just about a week. I can’t wait!

You’ll be singing that tune all day. You’re welcome.  😉 Remember INSIDE OUT and LAVA come out in theaters on June 19.

Be sure to also check out my pictures from my tour of Pixar Studios and my high-energy interview with Ralph Eggleston, the Production Designer.  These interviews on how they ‘staged’ and lighted this animated film are so interesting too.  My interview with the film’s animators explains the process for finalizing each scene. Want to know how they decided on the shape of each character? That info is in my interview with Director Pete Docter and Producer Jonas Rivera. If you’re ready to load up on INSIDE OUT merch, this is where to shop. I have two mugs that I LOVE LOVE LOVE!  Finally, get the kids geared up to see this special movie with these fun free printable coloring pages and activity sheets!

INSIDE OUT along with LAVA hits theaters June 19!