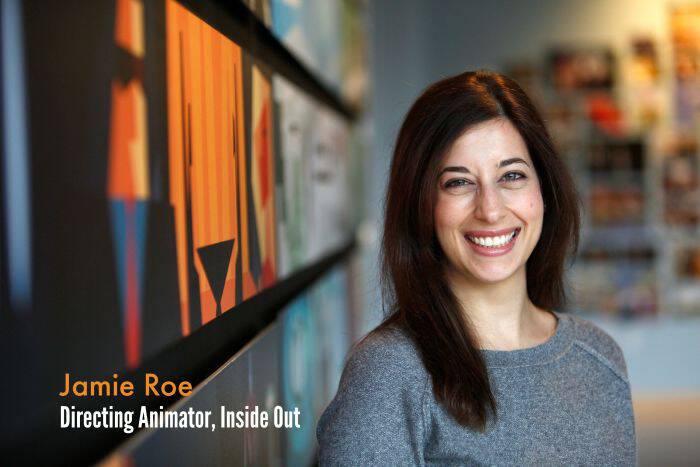 I’ve got more fun (and so interesting!) behind-the-scenes #InsideOutEvent coverage for you today. I had the chance to meet with a few of the animators that created INSIDE OUT and learn about the process that they go through to bring these characters to life. Above is Jamie Roe, Directing Animator on the film. She animated Sadness, one of the most important characters in the movie (who’s very lovable despite her…well, perpetual sadness!) 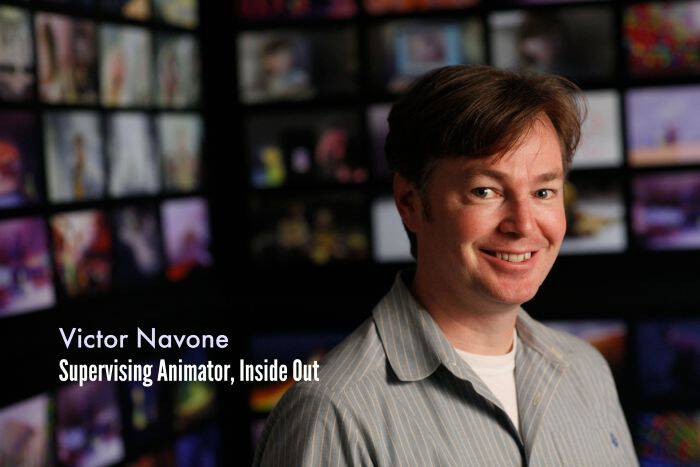 Victor Navone is one of the Supervising Animators on the film and he provided a lot of great info on how each scene goes through an approval process. More on that below! 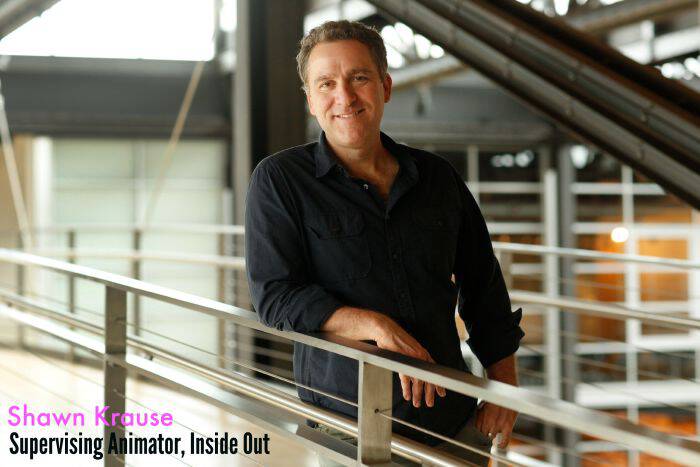 Shawn Krause is another Supervising Animator that walked us through the ‘dailies’ process.

We sat in this theater room, the actual room where INSIDE OUT dailies took place! So what’s are dailies? They’re daily meetings that last about an hour each morning. During that time, the film’s animators come together in this room (there’s a huge screen at the front of the room) with Director Pete Docter in the center of the room, and they fine tune the film.

Each animator works on difference scenes, and there were about 45 animators on INSIDE OUT at its peak – about half what some other films have had. When they’re ready, they present their scene during a daily meeting and get feedback from the Director and other animators.

This is a very collaborative meeting, tons of feedback. As the process goes on the notes can get a “bit nitpicky” according to Jamie, “but each frame is important to bringing the character to life and telling the story.”

That’s where this guy comes in. Tony Fucile is a Story Artist and incredibly talented. I got to watch him work and it was awesome!

During dailies, Tony sits at this screen in the middle of the room and while comments are being made to make improvements on different scenes, Tony is sketching those changes and making notes for the animators to go back and take a second pass.

His notes might look something like this. Then Tony can send this right back to the animator’s desk so it’s ready for them after the daily meeting and they can make some adjustments.

He’s basically an amazing note taker and artist all rolled into one! I love how this really allows the animators to listen and talk about their scene without having to take their own notes. Pixar has this efficiency thing nailed.

A 5-second clip can take the animators 3 weeks to finalize. In an average daily meeting they’ll get through 15-20 shots.  The film is made in the details and they don’t miss a thing!

After learning how these characters are animated I really take notice of the eyes, exaggerated movements, posture, all that stuff when I’m watching this trailer. It’s all intentional and so much work and talent has gone into this film. I can’t wait to see the whole thing!  Remember it comes out in theaters on June 19.

Be sure to also check out my pictures from my tour of Pixar Studios and my high-energy interview with Ralph Eggleston, the Production Designer.  These interviews on how they ‘staged’ and lighted this animated film are so interesting too.  If you’re ready to load up on INSIDE OUT merch, this is where to shop. I have two mugs that I LOVE LOVE LOVE!  Finally, get the kids geared up to see this special movie with these fun free printable coloring pages and activity sheets!