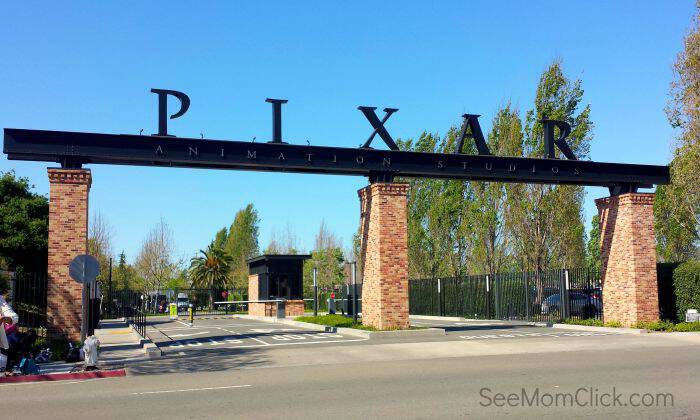 Just last week I was in sunny San Francisco for the #InsideOutEvent to get all the inside scoop on INSIDE OUT, in theaters June 19, from the filmmakers themselves. I had the BEST time touring the campus and interviewing the most brilliant and creative minds. I can’t wait to tell you more about it in the coming weeks. Today I’m starting with a photo tour of my time at Pixar Animation Studios. This is the MOST inspirational workplace I’ve ever seen. I *might* be Googling animation classes for my kids! So welcome, come through the famous Pixar gate with me and let me share my favorite pictures from my day there! 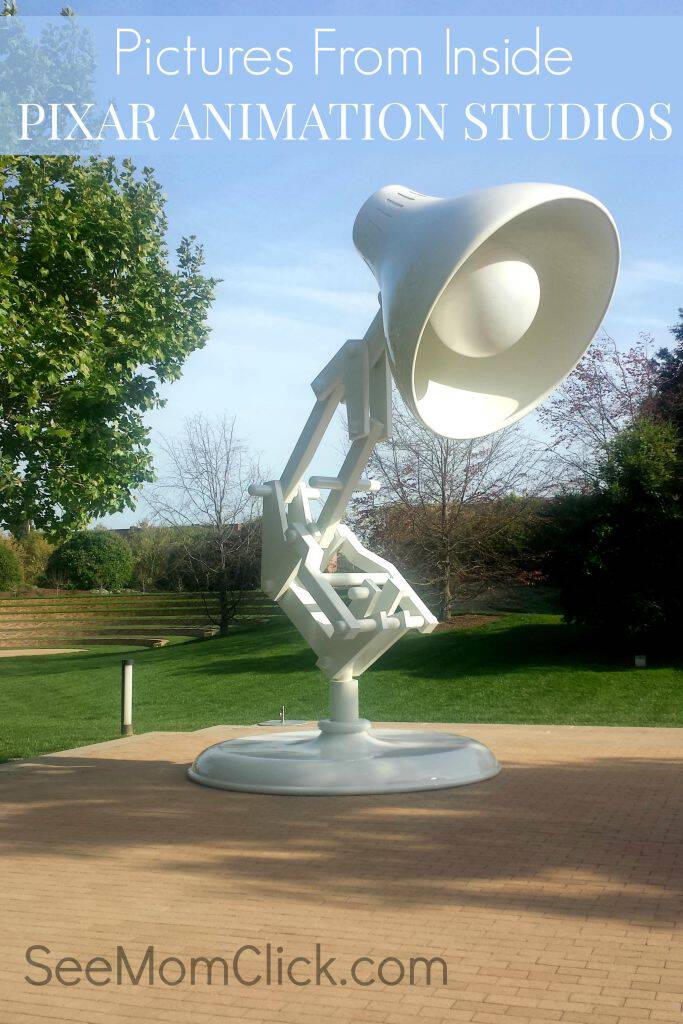 Right outside the main building where we spent most of our time interviewing filmmakers is the iconic Pixar desk light mascot, Luxo Jr.  You probably recognize him from the production logo on ever Pixar film. And yes, it lights up at night (picture later in the post)! 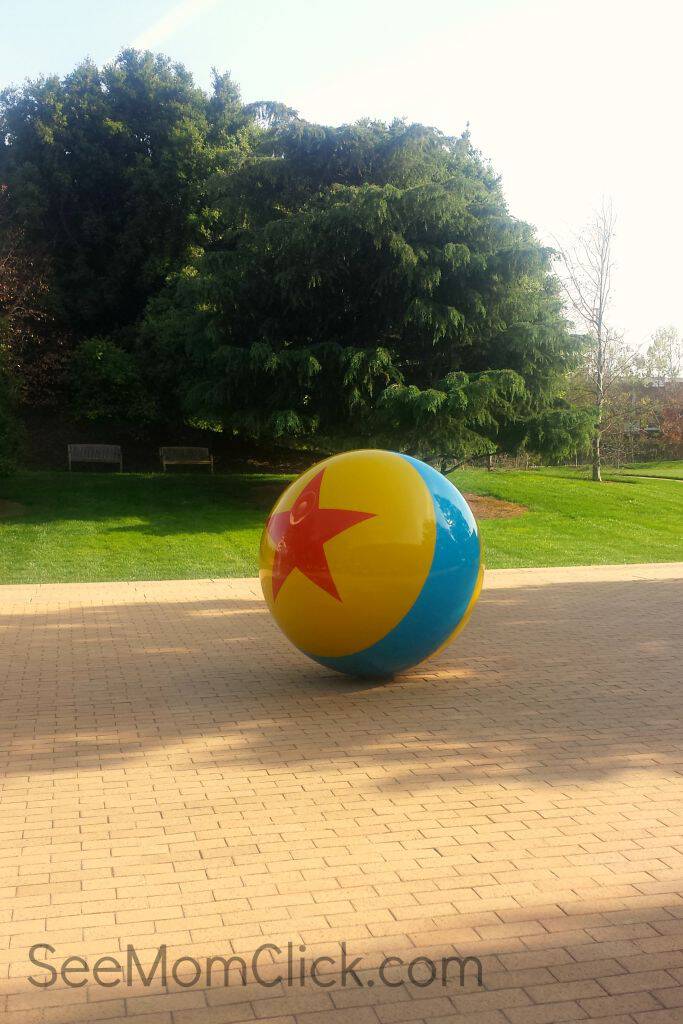 Right next to that light is the Pixar Ball, most recognized from its appearance in Toy Story. So before you even get in the door you’re in the mood for Disney fun and creativity. Imagine working here and being greeted with a giant toy ball every morning. Disney really walks the walk and I LOVE that! You can feel the energy from every person and in every space.

Pixar spun off as its own corporation in 1986 with funding by Apple, so the main building on campus is The Steve Jobs Building, a tribute made to his contribution to the studio about a year after Jobs’s death in 2011. (Disney bought Pixar from Apple in 2006.) This is where we spent most of our time at Pixar. Let’s go inside!

Just inside the door Mike and Sully are there to greet you along with a rack of umbrellas so that when employees are walking from one building to another they don’t get wet. BEST workplace!

The lobby area is decked out with art work and signage from whatever movie is coming out next, which is INSIDE OUT right now of course! I can’t wait for you all to see the movie! We got to watch the first hour and it’s so, so good. Moms, bring your tissues!

On the other side of the front doors there are some of our favorite CARS characters, Luigi and Guido.

Just beyond the CARS characters is a big case of awards. Pixar has won so many honors including several Academy Awards for Best Animated Feature. This is the one that BRAVE won in 2012!

A shot from above of the lobby shows you just how big and expansive this atrium is. No cramped quarters or stifled creativity here. And if you look on the far wall you’ll see Joy from INSIDE OUT. As I mentioned, there is artwork everywhere from the current movie throughout the building and some of it is really large and impressive.

Hospitality, or the cafe area, is on one side and you guys, this food is amazing. We had the pleasure of eating lunch catered by this department one day and it was just fantastic, restaurant quality. There’s lots of seating for meet-ups and brainstorming sessions.

Here’s just a little peak at the fruit we were served at lunch. I didn’t even get the baby roasted carrots or salmon or cupcakes! See those trays of candy behind the fruit? Those are Bing Bong tears. Remember to look for them when you see INSIDE OUT!

You can see there is a lot of open space on the main floor. I even saw a couple of people riding scooters through the building!

Here’s a closer look at this picture of Joy. She’s designed to look like a starburst, full of happiness and energy. Love this pic!

Standing facing the front door with that picture of Joy behind me, this is the view. You can see Sully by the front door if you look closely for the blue guy.  I just want to give you the feel for how spacious this is. No cubicle farm in this place. Every part of the building that we saw was really open, airy, and inspired creativity.

Of course I made a stop (or two!) in the Pixar Studio Store. I got tee-shirts for myself and the family, which we’ve all already worn at least once. And I got the BEST mug here!

As I mentioned, most of our time was spent in The Steve Jobs Building but we did venture to one other building on campus while we were there, primarily for the reception that took place after we screened the short film LAVA and first hour of INSIDE OUT (more to come on that soon). This view looks back on The Steve Jobs Building (on the left) and you can see the Pixar ball on the right. The grounds are just beautiful. That California sunshine doesn’t hurt but I just love all the landscaping.

On the walk from one building to the  next you pass this soccer field where games are held for whoever wants to join in on Monday, Wednesday and Fridays at 12 noon. I’d definitely be doing that if I worked there! (Can I please work there?!)

Here’s another ‘WOW’ spot: Yes, there’s a pool on campus and we did see a couple of swimmers doing laps. Shortly after this photo was taken there were a group of employees on the lawn doing yoga.

Inside the second building we went inside there is a bunch of gorgeous BRAVE artwork. I absolutely love this huge picture of Merida in the entryway. Stunning!

Nighttime at Pixar is just as inspiring as it is during the day with the Pixar desk lamp lit up. I hope you enjoyed this little photo tour. It’s truly an amazing place just to walk through like I did, but to work there? It would be just amazing to work there every day, always have a place to go where your creativity and ideas were welcome and wanted and where the environment and building itself inspired you to be your creative best. Pixar left a huge impression on me and I hope I’ve been able to share some of that with you.

You can see why Pixar movies are so outstanding, and INSIDE OUT is going to knock your socks off!  Remember it comes out in theaters on June 19. Get ready for the first, best movie of the summer!