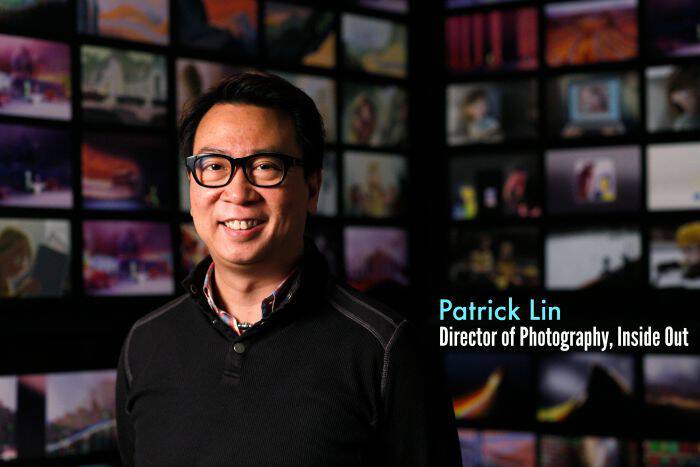 My #InsideOutEvent coverage continues today with an awesome insider’s look at how these characters really come to life on the screen through visual storytelling and lighting. This is Patrick Lin, Director of Photography on INSIDE OUT and of all the filmmakers we met and presentations I sat through I think I learned the most that I didn’t know in my chat with him. 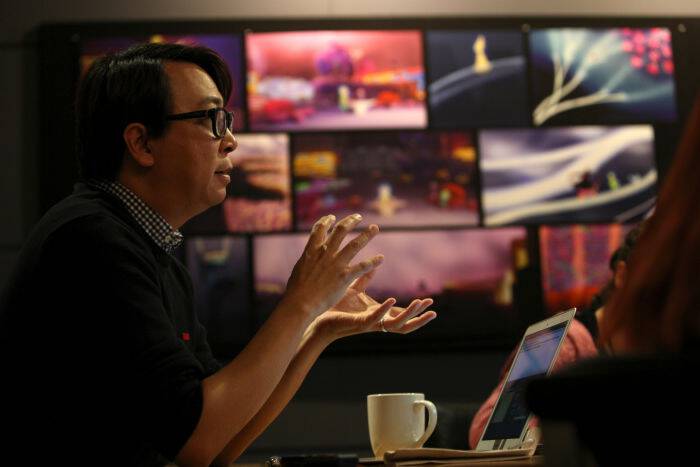 Peter explained to us that in a live action movie we always hear ‘lights, camera, action!’ In an animated film, it’s camera, action, then lights. So his department is the one responsible for the visual storytelling, or the ‘camera’ part. Action would be done by the animators (look for that post in the coming weeks!) and lighting is done by the lighting folks (keep reading!).

“It’s up to us to find the best way to place the characters and the camera to tell the story.” – Peter Lin, INSIDE OUT 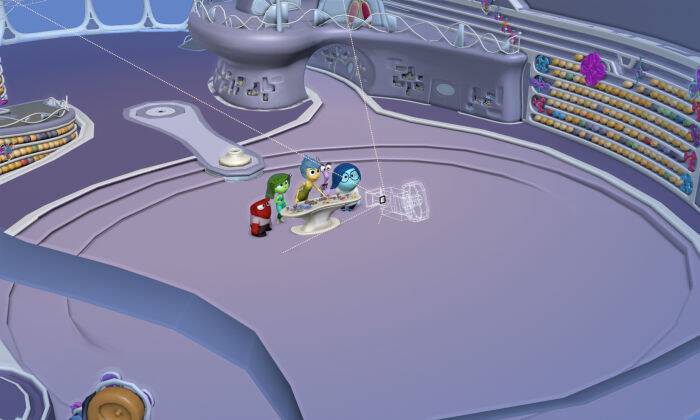 Just like in a live action movie, the camera has to be at a fixed point. So you can see in the image above what this looks like. First they create a 3D digital set. The space you see above with the emotion characters in it is called Headquarters in the movie, the main hub inside of Riley’s mind. After you have the set all laid out, you bring in the camera and decide where you’re shooting from. Last, you bring in the characters.

After all this staging is done, it’s handed off to animation to animate. They can then concentrate on the acting and emotions, but they don’t have to worry about where the character is or when they move from one place to another. That’s all done in Peter’s department.

Take notice when you see the movie how the visual languages are different for the inside world (inside of the mind with the emotion characters) and the outside world (with Riley and her family). Inside is sort of a virtual world and everything is perfect. In the outside or real world, things are imperfect, more organic.

You can also take a look at the staging. I didn’t notice this when I was watching the first hour of the film so I’ll be on the lookout when I see it this summer! In the beginning Riley lives in Minnesota with her family and is really happy. She’s always placed between her parents, the center of their world. When they move to San Francisco and she loses some of her happiness, she’s off to the side, representing that she feels out of place.

This is what visual storytelling is: not just composing pictures but giving them meaning.

Once the Photography department is done with their staging and the movie is animated, it then comes to Lighting. This is Angelique Reisch, Lighting Artist on INSIDE OUT and she happens to think that the lighting department is da bomb.

“We have the best job at Pixar. We get to bring these images to life.”  – Angelique Reisch

Angelique explained to us that there are a lot of technical complexities in lighting, so the lighting artists (who sit in the dark, by the way, in the center of the building where there are no windows) need to have both strong technical skills and artistic talent.  Joy herself is a light source. So how do you light a light? See? Tricky stuff.  😉

Take a look at this image above. This is pre-lighting. Now look at the image below.

Wow, right? Such a huge difference and that’s all done with lighting. Lighting isn’t only used to create pretty pictures. It’s used to create warmth and a feeling of safety. It can be used to have the viewer’s eye focus on one thing and not another, to spacially organize a scene, or to create a mood.

The Lighting artists gets about two shots approved per week. That didn’t mean much to me so I asked how many shots there are in a film. Any ideas? 1200-1400. So this is time consuming work but it really makes the movie.

And you know this movie is all about moods and emotions so in this film in particular the lighting is super important. Now that I’ve seen some before and after shots like the ones above I really notice the lighting in each scene. I think Angelique might be right about having the best job in Pixar. This is pretty awesome stuff!

I love how differently you see the films and trailers when you know how the movies are actually made. Do you notice the lighting more, or how the characters move? I do! INSIDE OUT is going to be fantastic!!  Remember it comes out in theaters on June 19.

Be sure to also check out my pictures from my tour of Pixar Studios (can I please work here?!) and my high-energy interview with Ralph Eggleston, the Production Designer. What he told us about moving between the inside mind and outside world in the movie is fascinating!