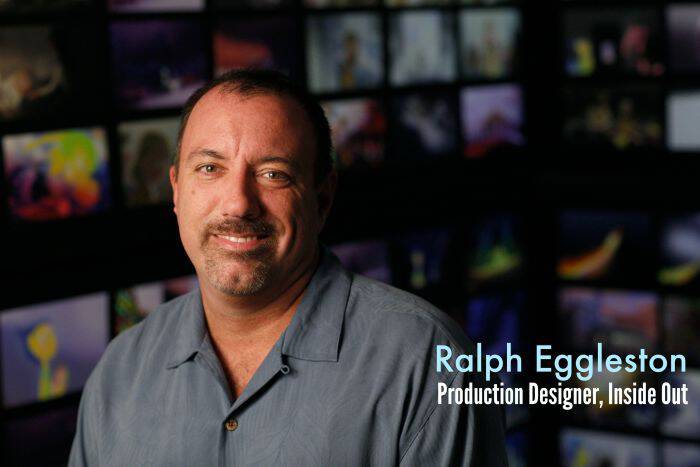 Last month when I was in San Francisco for the #InsideOutEvent to get all the inside scoop on INSIDE OUT, in theaters June 19, I had the opportunity to chat with some of the filmmakers about how they come up with the concept for a film like this, and then how they bring it to life.  If you checked out my post on my tour of Pixar Studios you got the gist that this is a high energy, really positive place to work. The most enthusiastic person I met on press day was Ralph Eggleston, Production Designer. This guy was just awesome to talk to and learn from how they really developed the inside mind (and outside world) of INSIDE OUT! 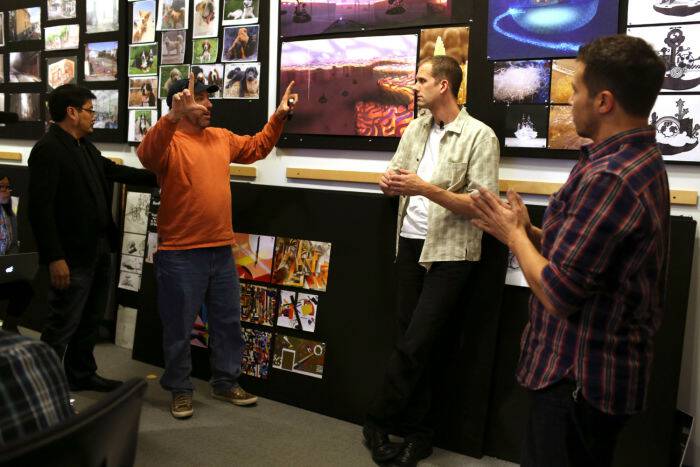 This picture above is a group of people that worked on INSIDE OUT including Ralph (orange shirt) talking to Director Pete Docter. Together they had to coordinate how to visualize the story.  For filmmakers, creating INSIDE OUT was almost like making two movies: the real world that Riley, the little girl and main character, experience in her life; and the world inside of her mind where all of her emotions live. If you change something in the real world, it changes things in the mind world. How will the audience know the difference and follow along without getting lost? 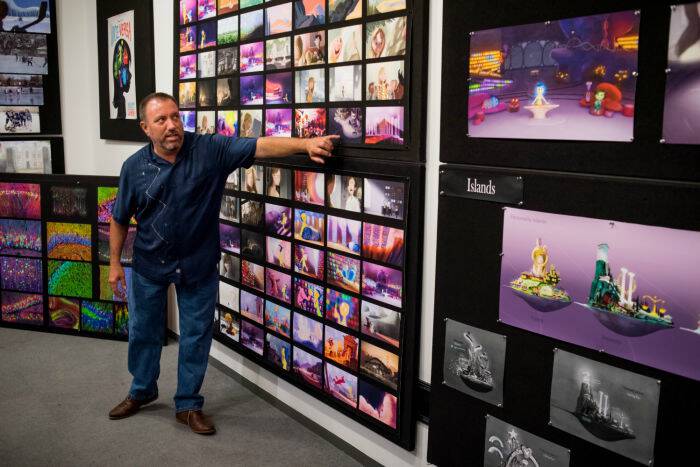 We met with Ralph in this room and he walked us through all the images on the walls that, when you see them laid out like this, really illustrate how they used light, color, and contrast to lead the audience through the film. (Couple of things to point out in this pic: Look at the poster on the wall behind Ralph’s head. It’s the French INSIDE OUT poster, Vice Versa. So cool! And see that board on the floor behind him? Those are microscopic photos of the brain and neurons – “brainbows” as he called them. They used these as inspiration for creating the vast maze that is our minds!)

Take a look at the emotions inside of Riley’s mind. They’re highly saturated, high contrast, bright colors, and translucent surfaces. See how the characters are kind of pixelated or made of little particles? This came from the idea that Joy is modeled after a sparkler.

Now look at Riley’s ‘real’ world. The colors are very textured, low contrast, and we see hard surfaces that reflect light. I think this is so brilliant! I watched the first hour of the film and it never crossed my mind to wonder whether any scene was taking place in the outside world or inside the mind. I instinctively knew, and that was all deliberately arranged with the use of color and light. Watch for it when you go see the movie!  Another thing to watch for: Riley and her family live in Minnesota at the beginning of the film and she’s really happy there. Then they move to San Francisco and things change for her. See if you can notice the change in colors used in each of these cities.  In Minnesota we see pastel ‘happy’ colors, and in San Francisco (pictured above) the colors are more low contrast and desaturated.

This series of pictures laid out like this is called a color script and lets us see the back-and-forth between the real, outside world and the world inside the mind.

Ralph was so much fun to talk to. This is one talented guy. I love getting this inside look at how they made the film. When you watch it on the big screen it just seems to seamless and perfect, easy to follow. It’s really interesting to see what kind of planning and creativity went into the movie to make it appear that way to the audience!

Check out the trailer above and you can see the color contrast I talked about in this interview! INSIDE OUT is going to be fantastic!!  Remember it comes out in theaters on June 19. Get ready for the first, best movie of the summer!