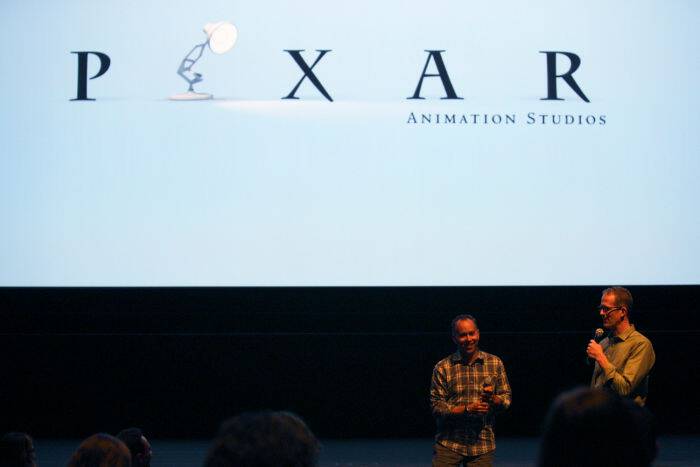 I have more great #InsideOutEvent scoop for you today! Above is a picture of Producer Jonas Rivera and Director Pete Doctor, INSIDE OUT filmmakers introducing the film before we screened the first hour of the movie at Pixar Studios in San Francisco at the end of March. I had the opportunity to interview both of them the day after the screening and talk more about their inspiration for the movie. Read on to see what they spilled!

Pete Docter is the Director of INSIDE OUT and he is so down to earth, really great to chat with. The thing I loved about Pete was how quickly I related to him and this story he told with this movie. When he introduced it the night of the screening he said the story “comes from a personal place, me watching my daughter Ellie grow up.” This, moms, is where all the feels come. Bring tissues. You have been warned. My daughter Lily is 9 going on 19 and I connected with Pete’s feelings about watching his daughter go from a child to a teen. It’s bittersweet. 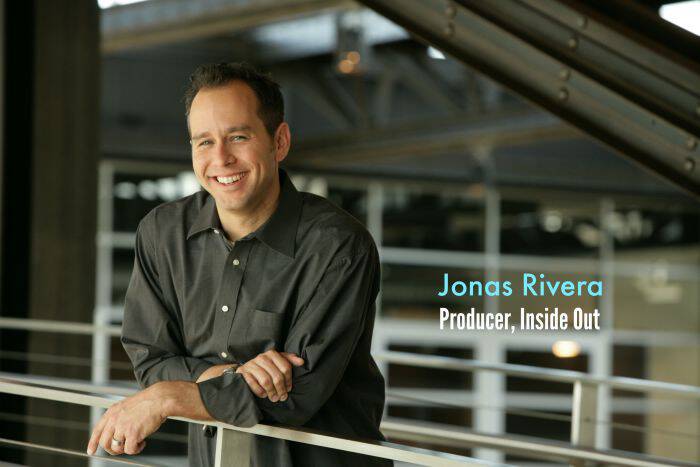 Jonas Rivera is the film’s Producer and you can tell by his warm smile what a friendly personality he has. Jonas talked a lot about the characters and how they came to be. Really interesting stuff! My bachelor’s degree is in psychology so I found the research that went into this film so fascinating.

Pete and Jonas shared with us that there are many different schools of thought on how many core emotions humans have. Finally they had to narrow it down to five (Joy, Sadness, Anger, Fear, and Disgust) or else it would unravel and be unmanageable. At one point pride and surprise were in the running but never made it to the film.

The INSIDE OUT emotions are designed to be recognized in a line up. They all have a very distinct silhouette.

“I wanted the characters to look the way our emotions feel.” – Pete Docter, Director INSIDE OUT

So here is what they designed the shapes of each character to look like:

I thought this was so cool! They actually had to create some new technology to ‘light’ the characters and make them appear to be made of particles of energy.

There was such an awesome team working on this film. You are going to LOVE it! I’m so excited for INSIDE OUT to hit theaters in June. The animation and lighting make it such a fun film visually, but the story and the emotions, meant to personify the difficulty of growing up, it is just so unique. Such a creative idea for a movie and they have done it SO well. Plus, it’s worth repeating, as a mom watching the years tick by it really makes me cry my eyes out. Have I suggested that you bring tissues? I think so. Bring tissues.

Here’s a fun tidbit: INSIDE OUT didn’t have a name for quite a while. Know what they called it? Cake! Because everybody likes cake.  Love this!

And this: While you’re watching the movie take a close look at some of the memories (those are these ‘balls’ that line the walls in the background). You’ll see some of your favorite shots from other movies inside!

I’ll leave you with one last line from Producer Jonas Rivera which pretty much sums up the heart behind INSIDE OUT:

“The key to anything is passion and this place is built on that.” – Jonas Rivera, Producer INSIDE OUT

Now do you notice the shapes of the emotion characters? I love how this insider info makes me look at the film with new eyes! Remember INSIDE OUT comes out in theaters on June 19.

Be sure to also check out my pictures from my tour of Pixar Studios and my high-energy interview with Ralph Eggleston, the Production Designer.  These interviews on how they ‘staged’ and lighted this animated film are so interesting too.  My interview with the film’s animators explains the process for finalizing each scene. If you’re ready to load up on INSIDE OUT merch, this is where to shop. I have two mugs that I LOVE LOVE LOVE!  Finally, get the kids geared up to see this special movie with these fun free printable coloring pages and activity sheets!