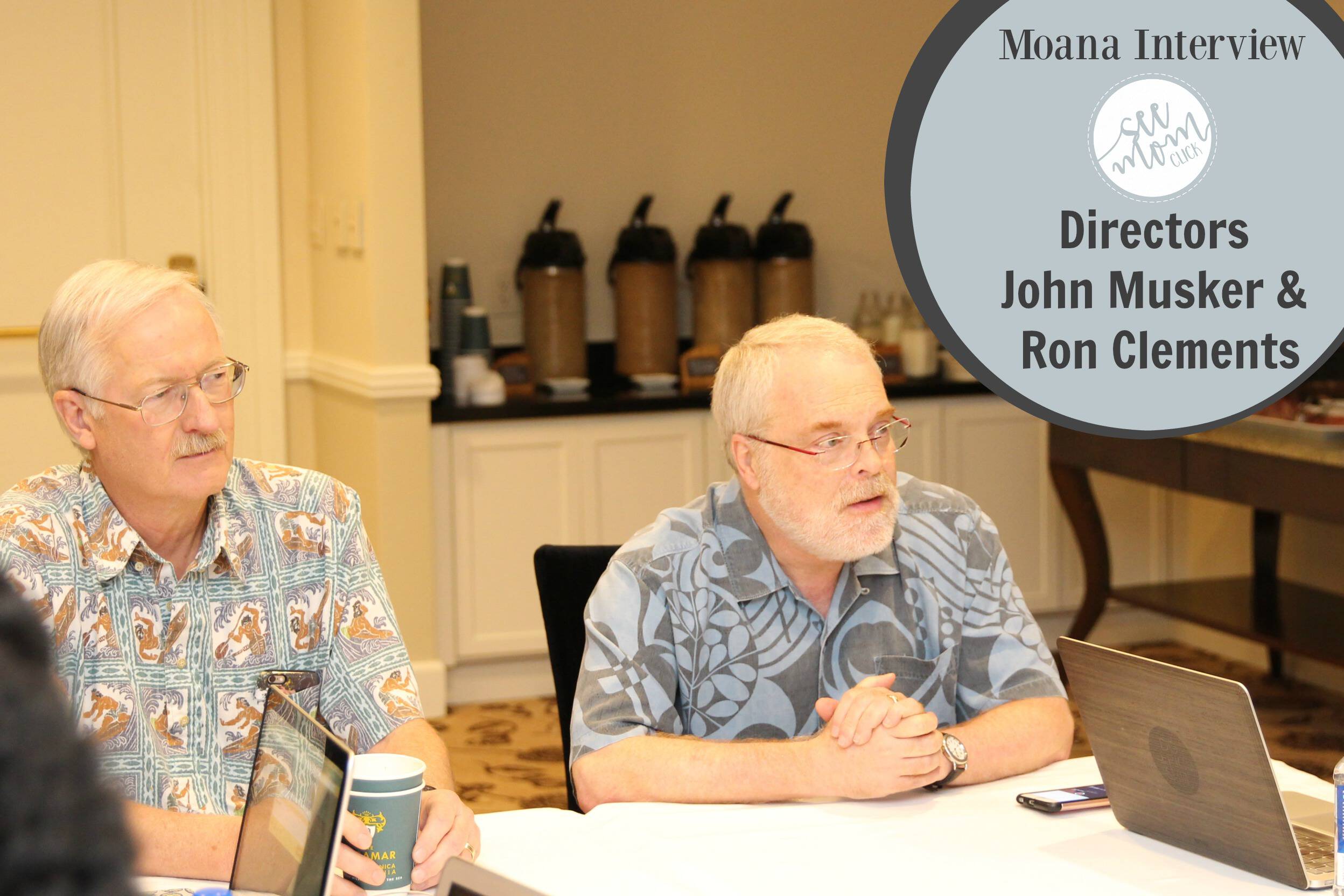 We just took the kids to see MOANA on Friday night and LOVED it! This is the 3rd time I’ve seen it and we were traveling every weekend since it came out so this was our first chance to get to the theater to see it. We talked the entire way home about everything we loved about the movie. If you haven’t seen it yet you really need to. It’s so good and so beautiful – a really good one to see on the big screen!

Today my MOANA coverage continues with Directors John Musker and Ron Clements (left to right above). You probably know them from their work on The Little Mermaid, Aladdin, and The Princess and the Frog. These two are complete film-making genius and it was so much fun to hear them talk about their craft and bringing MOANA to the big screen. Here are the highlights from our interview. 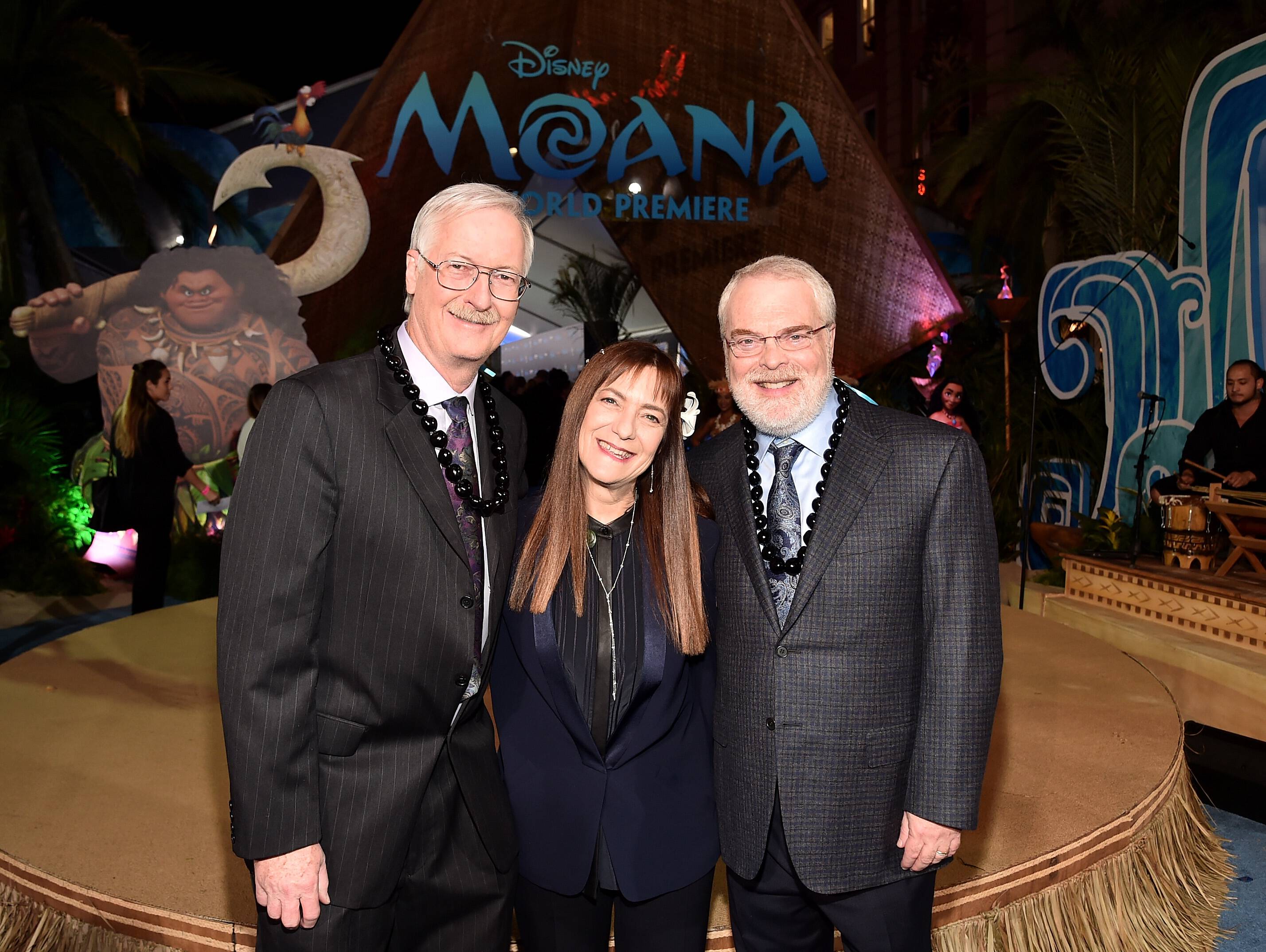 MOANA was the first primarily computer animated film that John and Ron directed, and they were asked how that was different for them.

RON: Some things are the same in terms of the script and the storyboarding and the voice actors.  That really isn’t different.  But the actual production process is quite a bit different.  We had to actually have tutorials before even the movie started.

JOHN: One of the big things is in hand-drawn you can get going a lot quicker.  You have a piece of paper, you’ve got a pencil, you can start exploring the characters. In CG they’ve got to build the characters, literally sort of create them in three-dimensional space.  They’ve got to rig them which means they’ll put all the armature in there so they can move around.  They’ve got to create the world they work in.  So, it’s a longer set of time.

RON: A lot of things even that had to be figured out in the movie.  Even the idea of a living ocean that has a personality, a lava monster, some of those things particularly where character animation and effects animation merge, that isn’t done usually.

There were a lot of things to figure out how to do and a lot of really smart people that said we actually don’t know how to do this, but we are confident that we will figure it out.

JOHN: And they did.  They really did.

On Respecting the Polynesian Culture 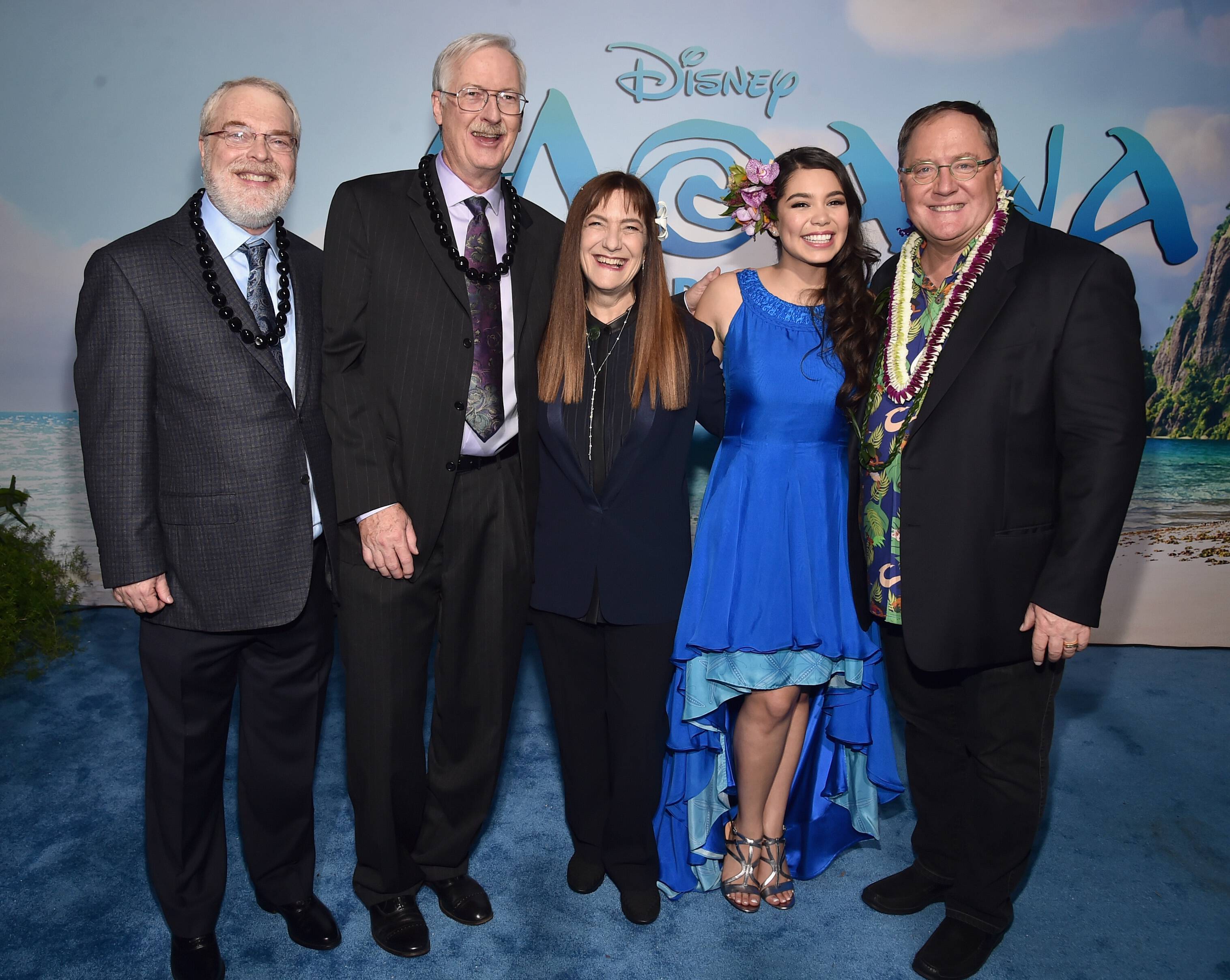 Research is HUGE in Disney movies. All of the filmmakers that I’ve ever talked to have really emphasized that. Not only do they want to create an accurate movie, but they want to honor the people they are representing whether that’s a culture, career, or something else. Here is what John and Ron said about respecting the Polynesian culture in MOANA.

RON: We did huge research five years ago when we first pitched the movie.  We spent like three weeks in Samoa, Fiji, Tahiti.  We met with cultural ambassadors, linguists, anthropologists, sailors and chiefs.

JOHN: We got to sail in Fiji with navigators and we really tried to connect with those people.  We really try to connect with the culture and learn how proud they were of their background as the greatest navigators the world has ever seen. They use dead reckoning to find their way across the sea.  The importance of respect for nature, respect for the environment and, and also the interconnectedness and extended families, and the idea of your heritage and your legacy.

JOHN:There was someone on the island, and he said for years we have been swallowed up by your culture.  And he said this all in Tahitian, translated to us.  One time can you be swallowed by our culture?  We absolutely took that to heart.  That became sort of our mantra as we did the movie over the course of the years and we kept people involved from the Pacific islands.  We had an oceanic story trust that we bounced story ideas off of costume ideas, the way the characters looked throughout this process.

We would Skype with them.  They came out to visit sometimes.  And case in point, Maui, in the early version he was bald.  He had no hair.  But then when some people saw it from Tahiti particularly they said no, no, no, long hair is part of his power.  So, he’s got to have long hair.  So, we said okay, forget it.  He’s going to have long hair.

MOANA Was Originally About Maui

Interesting, right? Yes, this movie was originally pitched as a film about the mythical Maui. Here’s how that evolved.

JOHN:  I was intrigued with the area of the Pacific islands.  And then that led me to read Polynesian mythology and then I read about this guy Maui who was unbelievable.  He was a shape shifter.  He had a magical fishhook.  He could pull up islands.  He had tattoos, kind of a superhero.  And I was like why has this never been done in a movie before?  And so I showed it to Ron.  We pitched a simple idea to John Lasseter. It was even kind of called The Mighty Maui actually, was sort of the original title.  Then John’s like you got to do research.  You got to go to the islands.

And when we went there and we heard about navigation and all this and it was really Ron’s idea, what if we have a character called Moana, which means ocean and we built it around her, someone who wants to be a navigator like her ancestors.  And Maui we sort of saw as a true grit type story where she really is this determined, forceful individual and she teams up with kind of a washed up, you know, down on his luck…

JOHN:  But she’s the focus of the story and so it was a challenge when we were making the movie always to keep her at the center.  Sometimes Maui, because he’s kind of like a magic character, he could start to rise up and we said no, no, this has got to be in the service of her story. Our producer was very strong in terms of keep the focus on Moana when Mali threatened to take over sometimes.

She faces numerous obstacles.  She’s resilient.  She’s also empathetic, which is an important part of who she is, and fearless and that she really finally proves herself and becomes the person that she’s meant to be.

You know they’re going to throw some in! My kids caught a couple when we saw the movie the other night but there are a bunch! See if you can find some of these.

RON: Did you see Sven? He’s the easiest one. W will tell you what they are but not where they are.  And they’re really interesting and some are very difficult.  Some are a little easier, some are not.  But Olaf is in the movie.  And you might think how can a snowman be in there but he’s in there a couple of times.

Flounder from Little Mermaid is in there briefly. Flash, the sloth from Zootopia. Baymax was in there. – John Musker

RON:  McGilla Gorilla is in there. You’ve got to kind of look at the right part of the scree to find them.

RON: He’s in the end.  And the reason he’s in there, some people ask why is he in almost one of the last images of the film?  And the reason is there’s been a little tradition in the last few years that there’s something acknowledging the next film. Our production designer at the last minute said, let’s put Ralph in the credits because he’s going to come up.  So, we saw and we liked it and said yeah, let’s leave it in there.