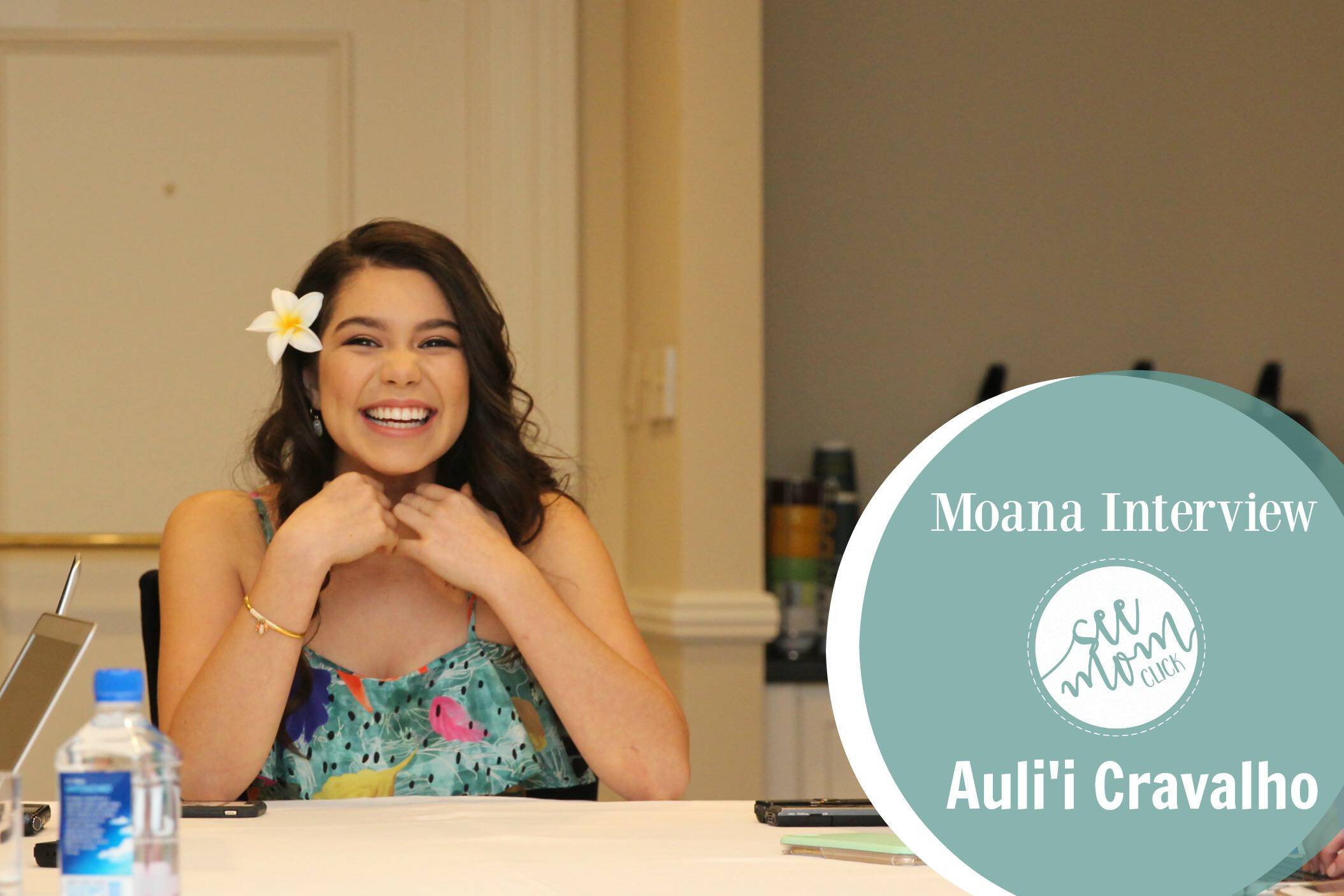 Disney’s MOANA is in theaters today!!! I am so excited to take my kids and for all of you to see it. It’s absolutely a new Disney classic and you’re all going to love it just as much as I do. Today my MOANA coverage continues, and following my pieces on Dwayne Johnson and Lin-Manuel Miranda, I’m sharing my interview with the star of the show, Auli’i Cravalho who voices Moana.

This girl is an absolute doll. She’s sweet and kind and beautiful, and so mannerly, and she just loves her mama. She actually turned 16 just yesterday, November 22, and I can only hope to raise my daughter to be as poised and gracious as Auli’i is. I’ve had the chance to interview some young talent over the past few years and this girl tops the list of class acts. 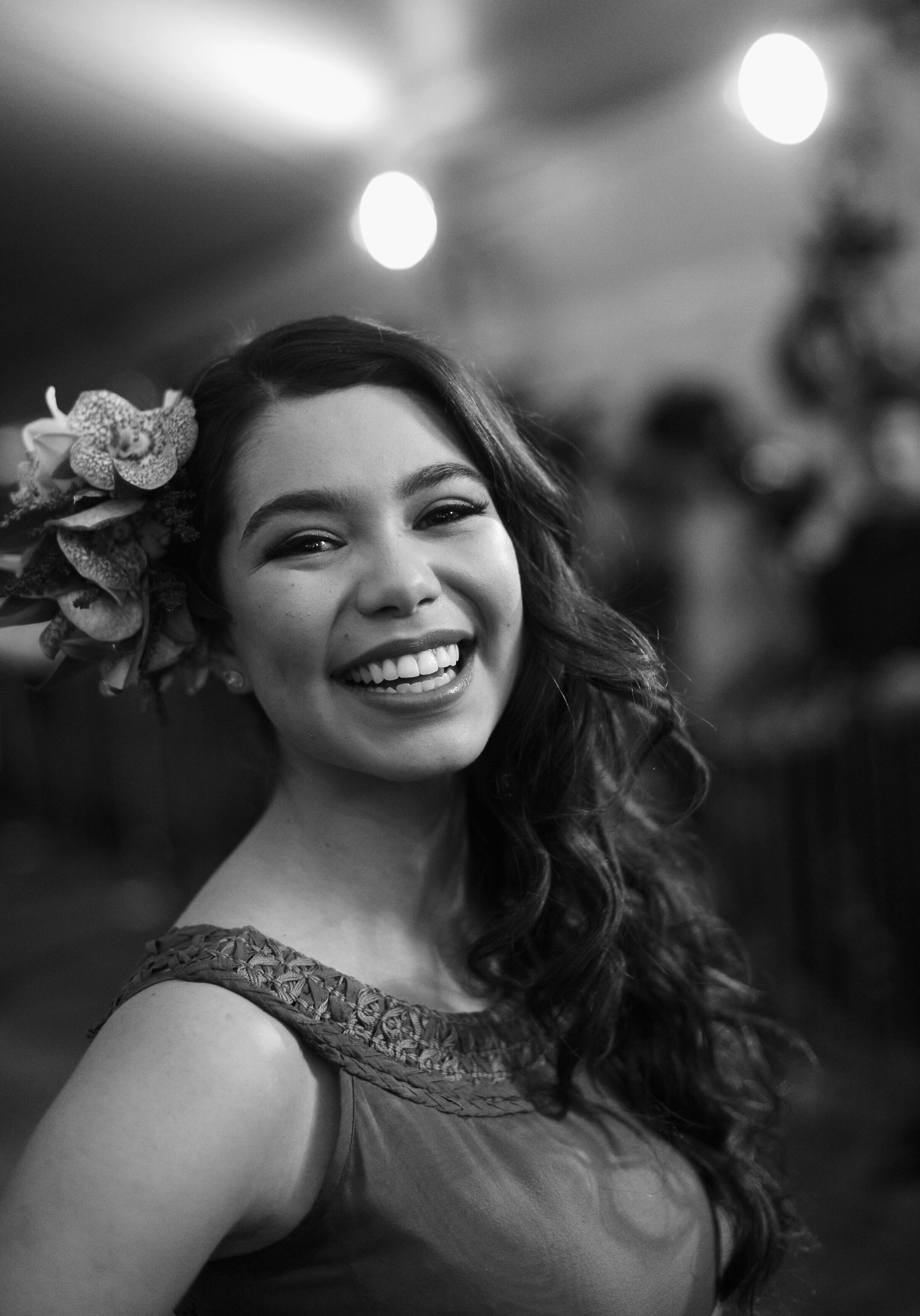 Not only is she dear in person, but she nails the role of Moana. Her voice is perfect for the role, both in the dialogue and the singing. She’s got a set of lungs! Here are my favorite pieces of what she shared during our interview.

On Finding Out She Got The Part

One of the really fun things about Auli’i playing Moana is that she’s brand new to Hollywood. I truly love it when new talent is discovered and someone gets their big shot. Many young girls auditioned for the role of Moana but she was the perfect pick and they knew it right away. 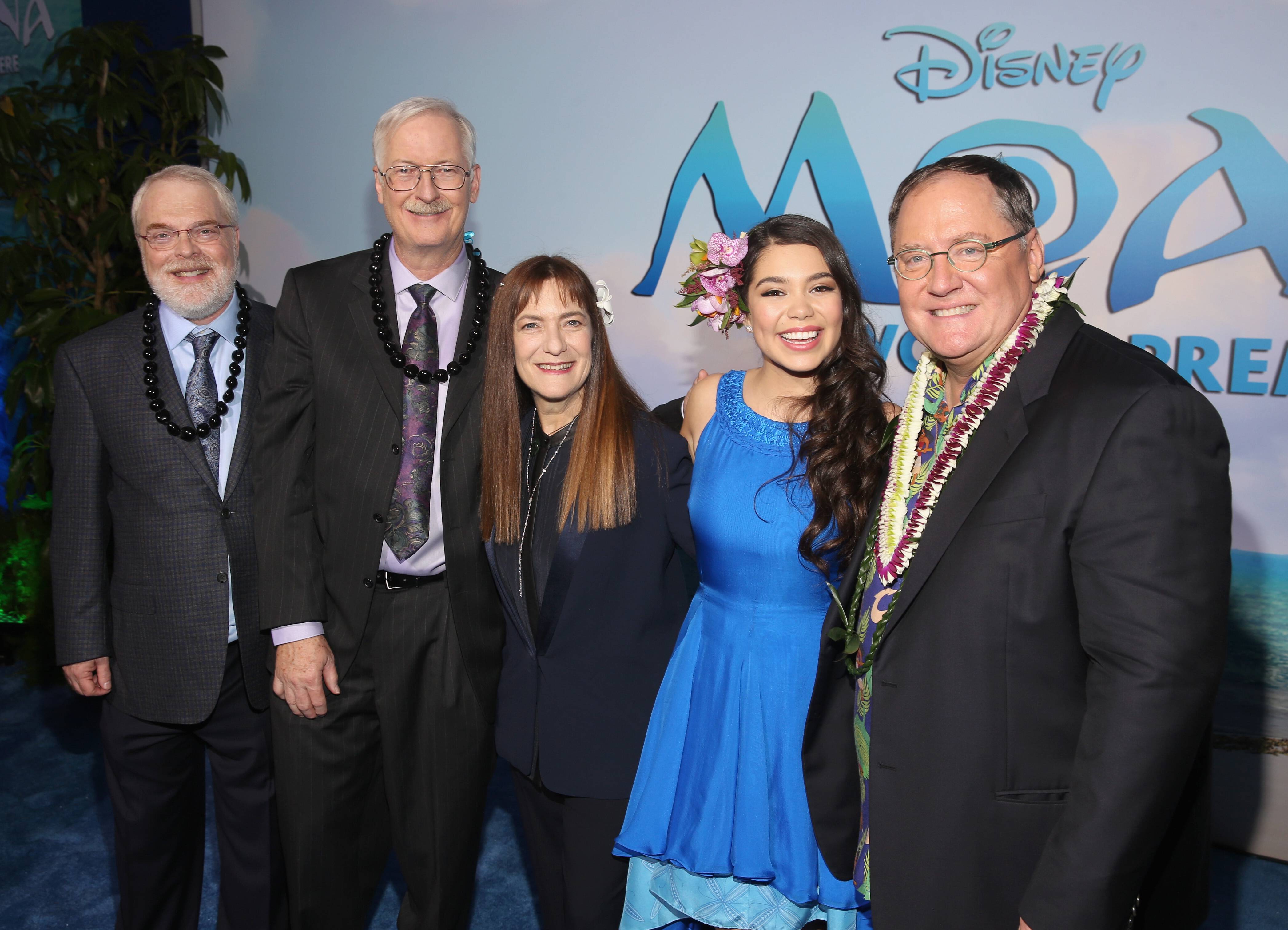 I had the opportunity to chat with Osnat Shurer, Producer of Moana (standing to the left of Auli’i in the photo above) and here’s what she had to say about choosing Auli’i for this part:

“There were some really good people, but it wasn’t until we heard Auli’i that we just knew, we just knew.  So we brought her to Burbank.  She was the only one.  We were talking about bringing the top three back.  I’m like just bring her, because we were so clear.  And then we met her in person and we knew she was our Moana.  And we did good.”

Even though they were so sure, they led Auli’i along just a bit to have some fun! She was called into another audition in Burbank, California and this was the first time she was auditioning in front of real people, “besides my mom, you know.” So she gave it her best shot and after a couple more lines, they finally told her she got the part. Take a look at the video below to see the joy on her face and the pride in her mom’s face. I tear up just watching them together. So sweet.

Isn’t this so sweet? I adore her mom and I’ve never even met her. Auli’i was thrilled to be cast as Moana!

“I could never imagine in my wildest dreams that I would be voicing this character. But I was just so happy and blessed.”

Disney nailed this one. She’s a delight in person and on the screen.

I mentioned that Auli’i was new to Hollywood and animation, so she had a bit of a learning curve. Backyard plays were her thing, but she didn’t know how to work in a booth. She expected she’d be doing her recordings with her co-stars but they actually record each voice individually, so not having anyone to bounce things off of was a bit of a challenge. Jared Bush, a writer on the film, helped her learn the ropes. She said they all made her feel right at home and understood that this was her first time doing this, which is exactly what they wanted.

“I think that’s something that makes Moana relatable, that I’m not a seasoned professional. But I think the emotion that I bring to her is something that is very true. And I was able to connect to Moana on a deeper level as well.”

Some of the scenes in the film are pretty intense. Auli’i was asked about how she got to the place in her head where she could voice those scenes with such emotion. The scenes with Gramma Tala, her beloved grandma in the movie, were the most difficult for her.

“Those were the hardest scenes for me. And I can tear up just thinking about them, because I always imagine my mom as my Gramma Tala. Whenever I think of someone who pushes me beyond what I think I can do, but support me and love on me just unconditionally, that’s my mom.”

After recording those scenes she’d open the door to the booth and have a little hug fest with her mama. (Do you love this girl or what?)

Because Auli’i is so young and new to show biz, she didn’t have a ton of formal vocal training, so when she took on the role of Moana she got a vocal coach which she was very excited about. I actually met her coach in the lobby of the theater on premiere night and she is such a sweet woman and so proud of Auli’i.

“I credit my singing voice to my mom because I came out screaming out of the womb and she didn’t give me a binky so I developed wonderful lungs. I thank my mom profusely for that.”

Auli’i said she ‘kinda just sang my little heart out in preparation for this role.” Her voice coach would work with her via Skype twice per week. She learned breathing tips, which she said was really important because in voice acting you can’t hide much. “In the song, if you’re emotional and your breathing has to get heavy, your breathing has to get heavy but you can’t get out of breath. So it was another learning curve.”

‘How Far I’ll Go’ is one of the songs that Lin-Manuel Miranda wrote for Auli’i and she sings is so beautifully. Check out the video above to listen to this girl sing.

On The Message of MOANA

Most of the filmmakers and cast that I interviewed during the press event agreed that the main message in the movie is listening to that little voice inside of you. I got a bit of that message from Auli’i but it was interesting to hear her take as a teenage girl on what she personally got out of the film. Here’s what she had to say:

She’s determined and beautiful but being strong doesn’t mean that you don’t have your weaker moments. Moana is all of that, and I think her journey of finding herself is something that everyone can take away from, girl or boy.

I’m really proud of the character that Disney has portrayed on screen. Not only will people look up to her but people will begin looking up to me. That’s something I can’t quite wrap my mind around just yet. I am a 15 year old who has so much more to learn. And I have so much more to grow. I just am really excited for everyone to see her on screen because I find her someone that I look up to.

Her Advice to Kids

As a young person herself that has already accomplished so much, we were interested to hear what advice Auli’i would give to kids trying to find their way. I love the story she told about how she decided to just go for it and try to grab the role in the movie. She had the thought, and kind of doubted herself and how she would stack up to the competition, not wanting to get her hopes too high. “What could I possibly give that the directors haven’t already seen? But I thought to myself, why don’t I just try?”

Inspired by her mom, she went for it.

“I thought to myself,  if anything, I want to make her proud. And she was so proud of me. That’s what encouraged me to continue on my journey. And I hope that anyone else just goes out on that limb because they don’t know what life has in store for them. And please, please don’t put yourself down. Because there is so much more potential than you even know.”

I’ll leave you with that bit of wisdom from a beautiful, brilliant young lady who just celebrated her 16th birthday. I know you love her already and wait until you see her in this movie! GAH!!!

You can read my full review of Moana and see some pictures from the Hollywood premiere here. Check out my interview with Dwayne Johnson and my interview with Lin-Manuel Miranda, too! Go see Moana this Thanksgiving weekend!