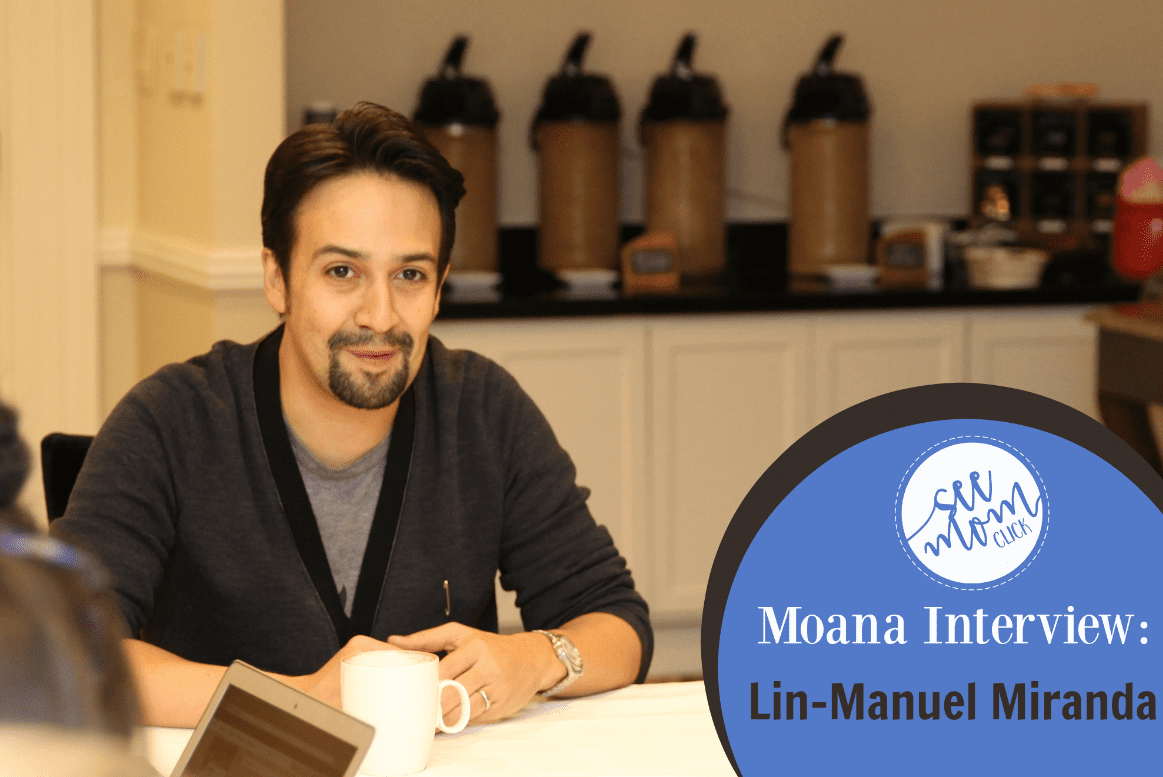 The MOANA press event was jam packed with talent! Be sure to check out my interview with the voice of Maui, Dwayne ‘The Rock’ Johnson. Today I’m sharing another of my favorite interviews. The music in MOANA is definitely one of the very best parts of the film. You’re gonna want to buy this soundtrack. I’ve been listening non-stop. Musical genius Lin-Manuel Miranda wrote many of these songs and they are just WOW! So good, so catchy, and as any good Disney movie song does, it moves the story along.

We chatted about music, but also about what inspires him, his family, and more. Lin is very expressive, very articulate, and just a lot of fun to talk to. He’s clearly a huge Disney fan and made references to several movies at different times during the interview. Here are my favorite things he had to share.

On Joining the Disney Family 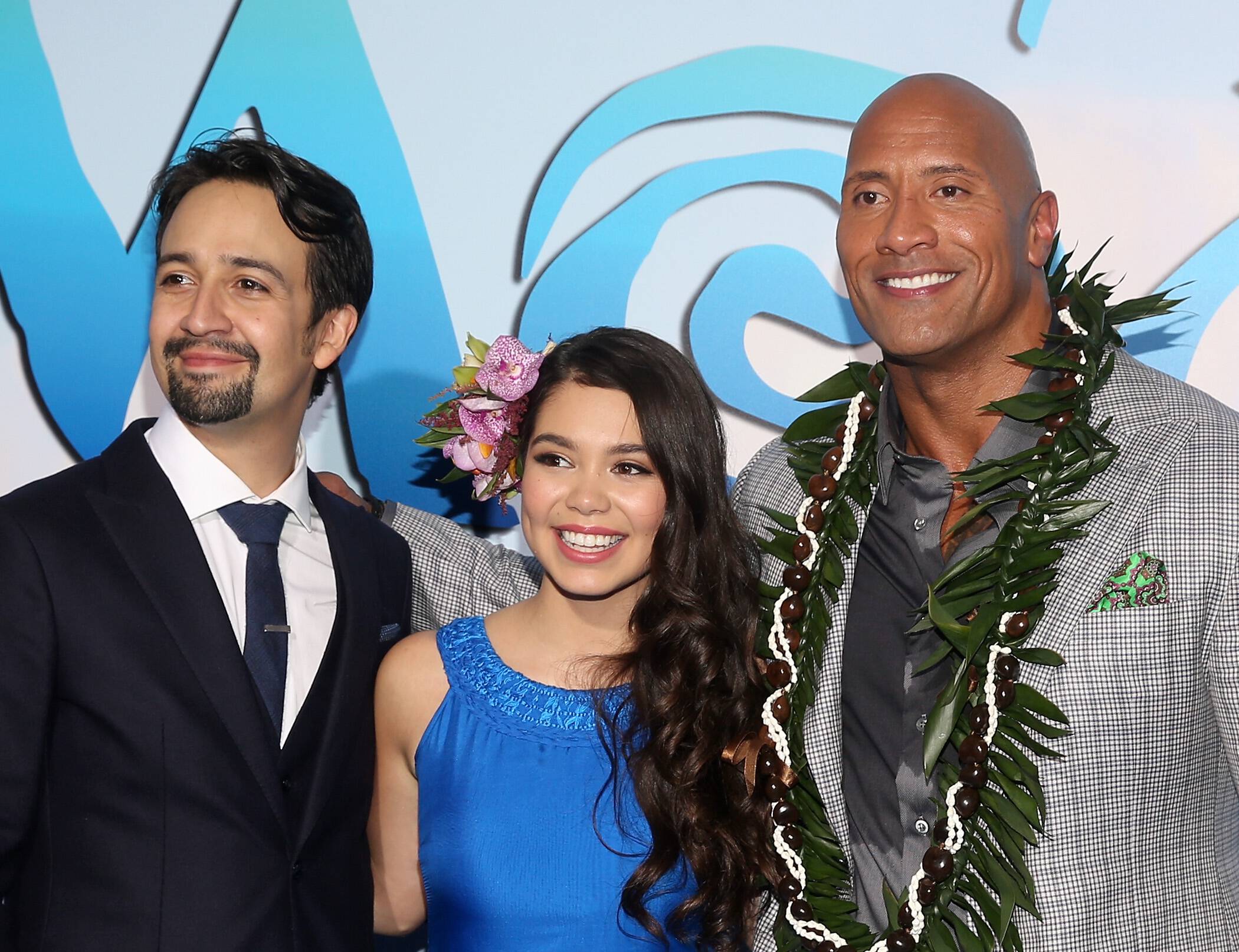 The interview started off with a laugh when Lin was asked how it was working with Disney on a film.  “It’s pretty dope,” he said.  His favorite part was the story meetings. He described them as sitting at a round table and kicking around ideas for the film. He loved that the notes weren’t from far-removed executives, but from people like Jennifer Lee and Pete Docter (both Disney/Pixar film Directors).

“Everyone who actually makes the thing are the ones who are kicking the tires on your story and making it better. That was my favorite part of the process. And getting to meekly raise my hand, and being like, I think a song could do that better. That was my way into the room.  It’s been a real joy.”

The Day That Changed His Life + Juggling Moana and Hamilton

This is such a cool story and as a mom, I just love how he has kept track of the timeline of his work on Moana based on the birth of his son. Here’s what Lin told us:

“This is the weird day that changed my life.  I woke up one Wednesday, and my wife’s a lawyer. She was off to get on a plane to go to a business meeting somewhere and she said, I think you might be a father.  I have to go to the airport. It was six in the morning, and I was like, that’s great — what?  I called her at noon once her flight landed, to confirm that I hadn’t dreamt the thing she told me.

“And then I got the Moana offer that afternoon. I interviewed for the job.”

That offer came with a plane ticket to New Zealand, where the rest of the creative team was already doing music research at this specific music conference.  I got on a plane to New Zealand, and I’m sitting with this secret that we’re five weeks pregnant.  It was one of those really insane, life-changing weeks.  That was two years and seven months ago.  I can remember it because my son turned two last week. He’s been the marker of time for me.

Isn’t that a cool story?! I love how he remembers every detail and it feels almost like his son and Moana came to be at the same time. So neat. 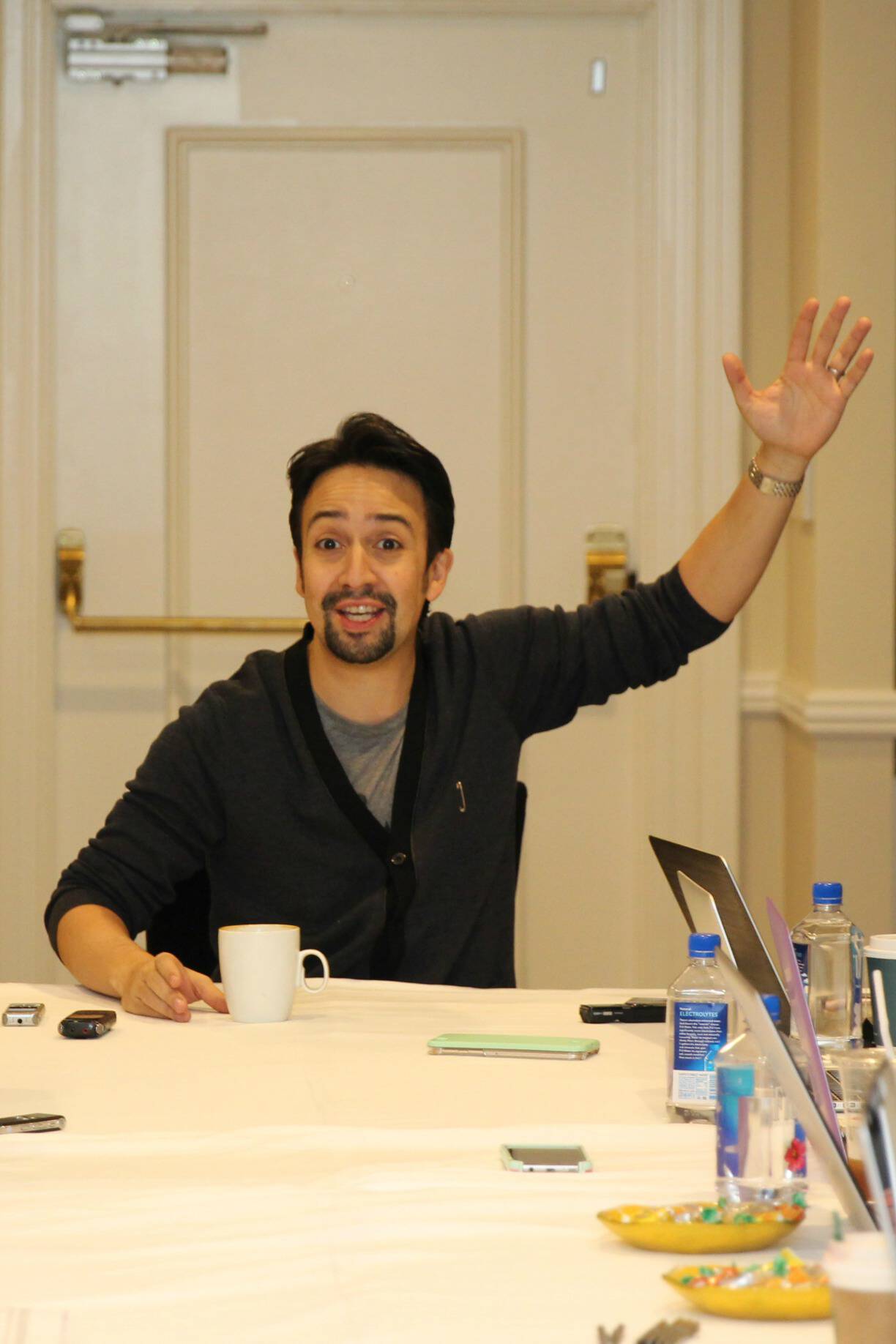 As you probably know, Lin was working on Hamilton, his hugely successful Tony Award-winning Broadway musical, at the same time that he began work on Moana. A lot of the Moana songs were written in the theater. He would write all day Tuesday and Thursday, Skype with the Disney creative team at 5pm, and then have his Hamilton show at 7pm. A lot of the demos were done with his Hamilton actors! You’ll hear some of that on the deluxe version of the Moana soundtrack.

On Writing Songs for Moana

If you are at all familiar with Lin-Manuel Miranda’s style, you can definitely hear it in the songs of MOANA. When told that it was pretty apparent that these were his songs, he replied:

These songs. I literally cannot stop singing them. Lin talked about writing them, and in particular said he is very proud of Moana’s song, ‘How Far I’ll Go.’ It’s one of my favorites, too! He told us that he literally locked himself up in his childhood bedroom at his parents’ house to write those lyrics, trying to get to his “angstiest possible place.”

Once Lin wrote that lyric, about the voice inside, it really affected the entire story. The screenwriters ran with that and he was very excited to see how the give and take between the songs and the story creates the finished product. They all had to  nail that idea that it’s not about being miserable where you are, but knowing there is more.

Lin told us that he could really relate to that:

“I was 16 years old, and I lived on 200th Street in New York, and I knew what I wanted to do for a living, and I knew where I was. The gulf just seemed impossible.  I mean, everything just seems so far when you’re that age.

When I’m writing Moana’s tunes, and that song in particular, it’s a calling.  It’s a calling the way I felt a calling to write music.  It’s a calling to see what’s on the other side of that horizon line.  And looking around at everyone content where they are, and being like, how are you content?  Look what’s out there, and we don’t know what’s there!  I very much related to that.  That’s sort of what I just tried to imbue Moana with.”

We asked Lin-Maunel what keeps him inspired, what’s next for him.

“I think you balance the things you’ve been dying to do all your life and the opportunities that come along, that you didn’t maybe think of, that are so amazing, that you’d kick yourself if you didn’t try to be a part of them.”

Mary Poppins Returns, a sequel to Mary Poppins will be coming out in theaters Christmas 2018. Lin-Manuel is starring in the film as Jack, a lamplighter so he gets to sing and dance with Mary Poppins all day and he’s pretty thrilled about that. He also said he still has some ideas rattling around that pre-date Hamilton saying to him, “Hey, we were here before you were cool. Don’t forget to write us!” So he’s balancing the new things that come his way with some ideas he’s been toying with for a while.

“I think every writer’s had the experience of having a really good idea, waiting to write it, and then once you write it, you’re like, oh. I kind of got past the sell by date on this.  I’m not connected to the initial spark that was the idea.”

Lin is staying open to changing the plan, staying open to new ideas that might nag at him. Like Moana, he’ll be listening to the voice inside of him. He said if you’re thinking about an idea in the shower, and then again while you’re walking the dog, there’s probably something to it.

On Writing ‘You’re Welcome’ for The Rock

‘You’re Welcome’ is Maui’s song in MOANA and it’s sung by Dwayne Johnson and it’s SO good! I love how fun it is, how it helps us get to know Maui, and the tune is so catchy – you will be singing it all. day. long.

Lin said that when Dwayne knew he was writing the song, he asked if he could rap.

“I wasn’t planning to write a patter section, but, you know, I serve at the pleasure of the president.”

Take a look at the clip below to have a listen. You’ll be singing it all day. You’re welcome.

Lin-Manuel said, “He sings it, and he arches his eyebrow, and he grins, and you’re like, I love this guy.” Amen to that.

During the course of our interview, Lin-Manuel referenced several Disney movies. So we asked him about his favorite Disney movie and he shared this awesome story:

The Little Mermaid is the number one.  That movie came out when I was nine years old.  I saw it when I was on a play date with my friend.  So I went with a friend.  It was not with my family.  It was my friend, Alex.

“And this crab starts singing a Caribbean calypso tune, and I was never the same again.”

I used to get up on my desk in fourth grade and sing it.  I remember calling in sick from school, on March 19th, because that was the day it came out on VHS, and I didn’t want to wait ‘til school ended. I wanted to go to the drug store that morning. Remember the soft covers? The white border? I wanted to get it that day, and I wasn’t going to wait.  So I was sick, and I had a stomach ache!  And I saw Little Mermaid at 10 a.m.

I remember getting the Disney sing-a-long songs, which came out before the movie. They just had “Kiss The Girl” and “Under The Sea,”  and then nautical-themed Disney movies throughout time.  So I know all the words to “Whale of a Tale”, from 20,000 Leagues Under The Sea because it was on my Little Mermaid sing-a-long songs.  So it’s that level obsession.

And really, I think because of that Sebastian the Crab, that song was unlike any other Disney tune I heard.  I was like, that has a Caribbean rhythm to it.  I’m from the Caribbean. And it just felt like, oh, you can go anywhere.  My desire to start writing stuff, I think, began with that movie.

Fast forward to present time and Lin-Manuel now has a two-year old named Sebastian. It’s a nod in-part to his initial musical inspiration. How neat is that?

I really enjoyed this interview so much. Lin-Manuel is so talented and you are going to LOVE the songs of Moana!

You can read my full review of Moana and see some pictures from the Hollywood premiere here. Check out my interview with Dwayne Johnson too! And mark your calendars and go see Moana this Thanksgiving weekend!