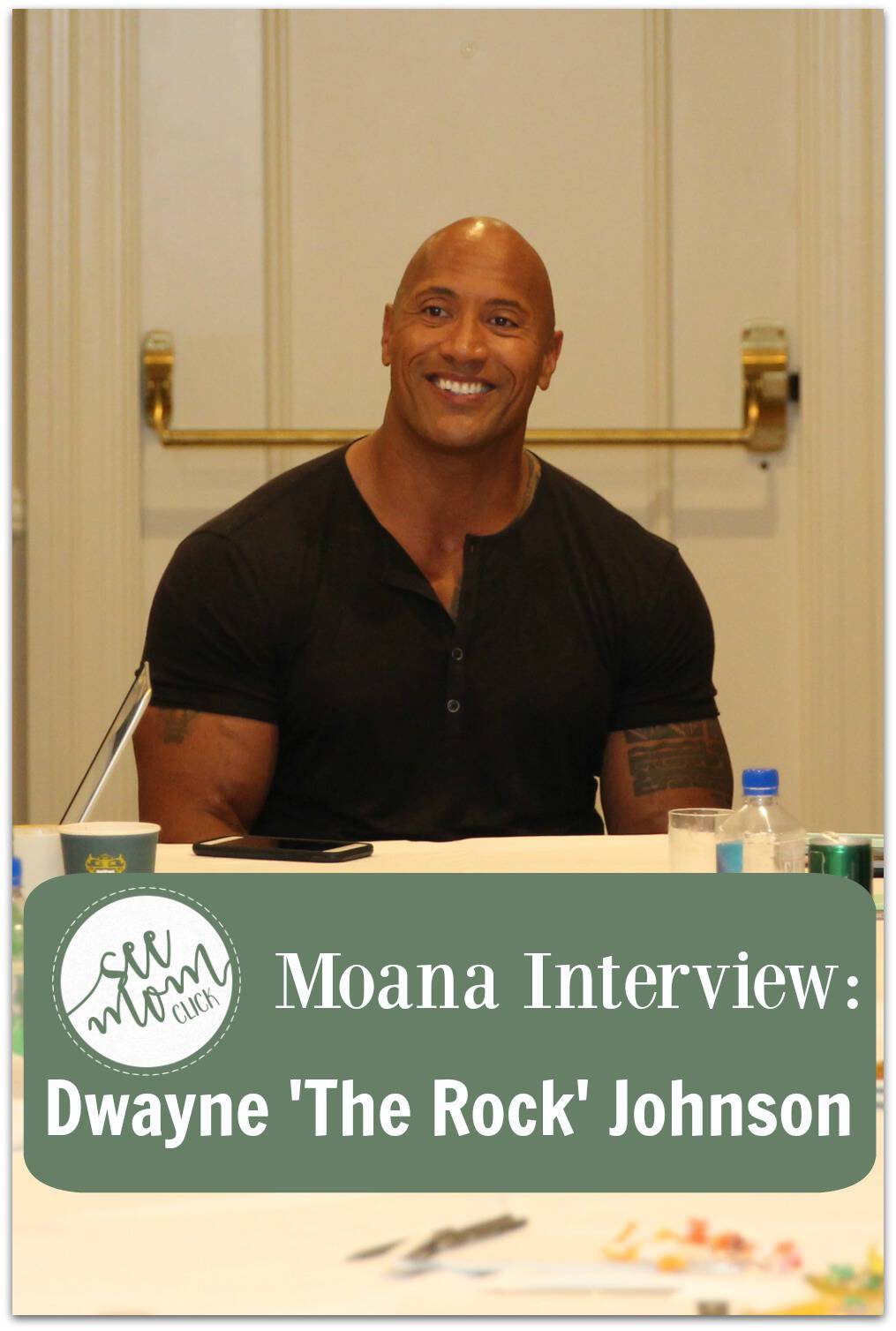 Let me start this with a true story. I met my husband in 1998 and one of my earliest dating memories was watching The Rock wrestle on TV.  (Just go with it, we’re almost 15 years into our marriage – it’s a strong foundation.) I’ve been a fan of the People’s Eyebrow and smelling what The Rock was cooking ever since. What’s not to love there, amiright? Fast forward 18 years and I’ve grown up a bit (thank you Lord) and The Rock has come a long way, baby, too. I see him in movies and on Ellen now and think what a genuinely nice guy he seems like, yet still very fun-loving.

So it probably goes without saying that I was thrilled to have the opportunity to interview him at the Disney’s MOANA press event in LA last week. A big hunky guy with a warm smile who I’d recently watched dance around in a Pikachu costume for his daughter.  I figured it would be a really fun interview and it was. But not only was he entertaining to chat with, he was very insightful, smart, and clearly a very loving father. Here are the things that stuck with me the most about our conversation.

On His First Time in Animation

Dwayne has been in two other Disney movies (Race to Witch Mountain and The Game Plan) but this was his first time in an animated film. He described it as the ‘same umbrella but a different machine.” 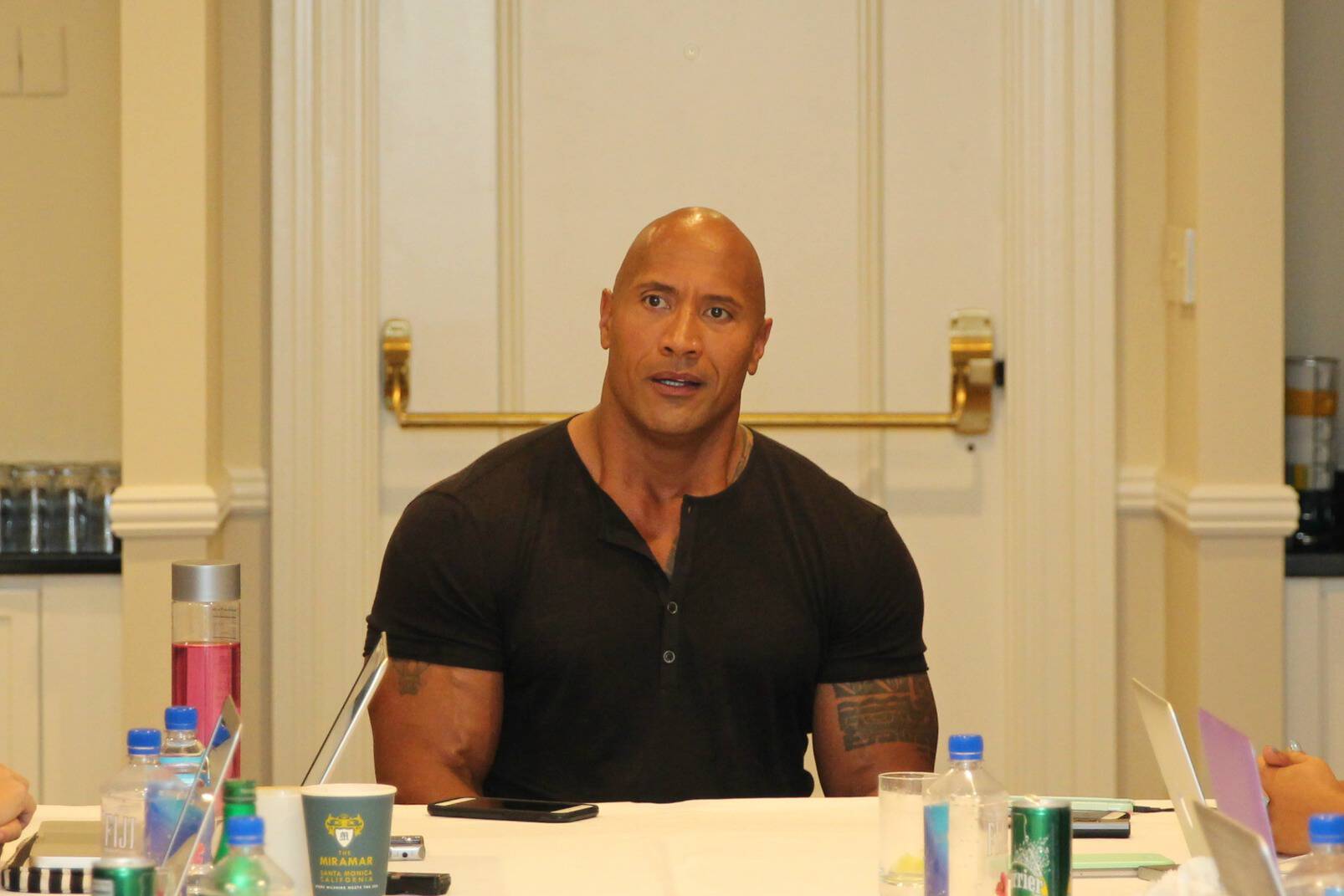 It was the opportunity to hopefully make a movie that was not only good, but you have a real good shot at creating something that was like a classic.  And that’s what I wanted to do.

One of the biggest differences in animation is figuring out how to use your voice and your words to bring a character to life.  Dwayne said he had a lot of help around him to find new ways to add zest and life to his words. “That was the biggest challenge – making sure that the words that I spoke had life and the correct energy and the correct temperament, tone, intonation, pitch and things like that.  It was a real fascinating experience for me.”

On Seeing Himself in Maui

When I watched the film I could definitely see The Rock in Maui. Definitely some of the same expressions (you’ll get the eyebrow!) and mannerisms are included. When asked what he saw of himself in Maui, here is how Dwayne responded:

“I think that there’s a part of Maui that I can appreciate, because it’s my DNA. I share that with him. There’s a fun side to Maui, and a desire to keep things fun, and not be quick to show the vulnerability.  And a lot of bravado, because you can mask a lot with bravado.”

This might have been my favorite part of the interview. Turns out celebrities get just as crazy for their kids as the rest of us do. In MOANA, Maui’s tattoos are kind of living things, and one of them serves as his conscience. He tells Moana that he earns his tattoos, they’re a bit like the story of his life.

When asked if he had a tattoo like Maui has that represented his best accomplishment, he said it would be being a father.

Dwayne also talked about that Pikachu routine! His youngest daughter, 11-month old Jasmine, is a little obsessed with Pikachu. So he found a costume that fit him (amazing!) and now he has this whole routine he does. Parents, you know about these routines, right? When it’s Pikachu time, he dresses up, has to sneak out the back door and walk outside around the house to ring the doorbell and surprise his daughter. Pikachu makes weekly visits, and moms, you will seriously love this part. That costume is HOT and he can’t talk when he’s in it. So his mom and wife Lauren have a little fun!

“Usually Lauren is there, my mom is there, and they mess with me because I can’t talk. Pikachu just doesn’t speak for obvious reasons and it’s so hot, and after fifteen minutes I’m getting ready to say goodbye and Lauren goes, “Pikachu wants to dance?  He wants to dance?”  And she puts on music and… another twenty minutes.  But it’s the best.”

High five Mrs. Johnson. That story cracked me up because I can totally relate!

Dwayne also spoke about the responsibility he feels to consider his daughters (he also has an older daughter who is 15) when deciding on a new role. “I think with every role there’s that added responsibility. Not necessarily ‘is it appropriate for her or for them to watch,’ but more so, are there qualities there that we look for that are important, and is the takeaway there?  The messaging is important, even within the context of something more on the comedic side. Those questions always still come up, and I always make sure that those boxes are checked.”


On Singing In the Film

The day after I returned from my trip to LA I ordered the soundtrack. It came out Friday and I’ve been listening to it non-stop ever since. The music in Moana is SO, so good. And one of my favorite songs is sung by Dwayne, ‘You’re Welcome.’ So catchy, and so fun! Take a listen in the clip below and then read on to see how he felt about singing in this film.

Isn’t this such a fun song? Every time I do something for my kids now I’m singing, ‘you’re welcome…’ They aren’t amused yet but they haven’t seen the movie so I’m going to give it some time. Dwayne was really excited about being able to having a singing role in this film. In the past, he’s sung just impromptu and for fun on a show like Ellen, but never at this level.

“It was a great opportunity to push myself and to sing. The bar’s set very high in a Disney movie when there’s the element of music.  I felt confident going in because I felt confident that I could prepare and do the things that I can control.”

Having the support of some amazing musicians around him really helped him nail this. He said that he was surrounded by really masterful musical collaborators like Lin-Manuel Miranda, Opetaia Foi’a, and Mark Mancina and that made the experience very special.  He also said that Lin-Manuel did his homework to figure out a comfortable range that Dwayne could sing in, but also pushed him a little bit. It came out PERFECT. I seriously love this song! Dwayne said he had a “real, real, real good time.” And I had a real, real, real, good time watching him sing in Moana. And rap! There’s a bit of a rap in the piece and he’s also pretty happy to be able to call himself a rapper!

On The Messages of Moana

This is a two-fold response. Every single person that I talked to that was involved with this film expressed the same excitement about sharing their Polynesian culture with the world, and The Rock was no different. He is half Samoan and half black, and one of the big take-aways from this film is the richness of culture.

“I wasn’t too sure that I was ever going to get the opportunity again to showcase our culture. It’s very rich and we’re very proud of it.”

Dwayne felt that the filmmakers did a tremendous job of representing the Polynesian culture in a way that makes their people proud. Any hesitation he felt was quickly relieved when he sat with Executive Producer John Lasseter and was taken through their research process. This is one thing I’ve learned about ALL Disney films: they do their research!

By the time Dwayne had seen the script, Disney had already done tons of research, visiting the different islands, speaking with the high chiefs, spending time in the villages, and understanding the culture. All of that creates an authentic film.

“There’s a wonderful quality of our culture. There’s a fierceness to our culture too, and a tremendous pride.”

In addition to the truly beautiful cultural side of the film (and I love this as a parent too, because it makes not only for an entertaining movie but also an educational one), you know Disney usually has a lesson throw in. In Moana that lesson is pretty obvious: Listen to that little voice inside of yourself.

Dwayne explained, “We have this little voice inside of us. Listen to the voice – a gut intuition, and have that kind of faith, not necessarily religious faith, but faith that there is more.  And you can be more. ”

And finally, one more message from The Rock: Have fun and enjoy it. “I’ve seen the movie with an audience, and unbeknownst to them that I was there, and it was really cool and special when all the kids were leaving, and there was just this energetic thing that happened in the theater where they kind of leave floating.  When you accomplish that, it’s just such a cool thing, because it stays with us for life. To create magic like that for our kids and adults is awesome.”

Dwayne Johnson is PERFECT in this film in the role of Maui. I am seriously so excited for everyone to see it and I can’t wait to take my kids! You can read my full review of Moana and see some pictures from the Hollywood premiere here. Now mark your calendars and go see Moana this Thanksgiving weekend!