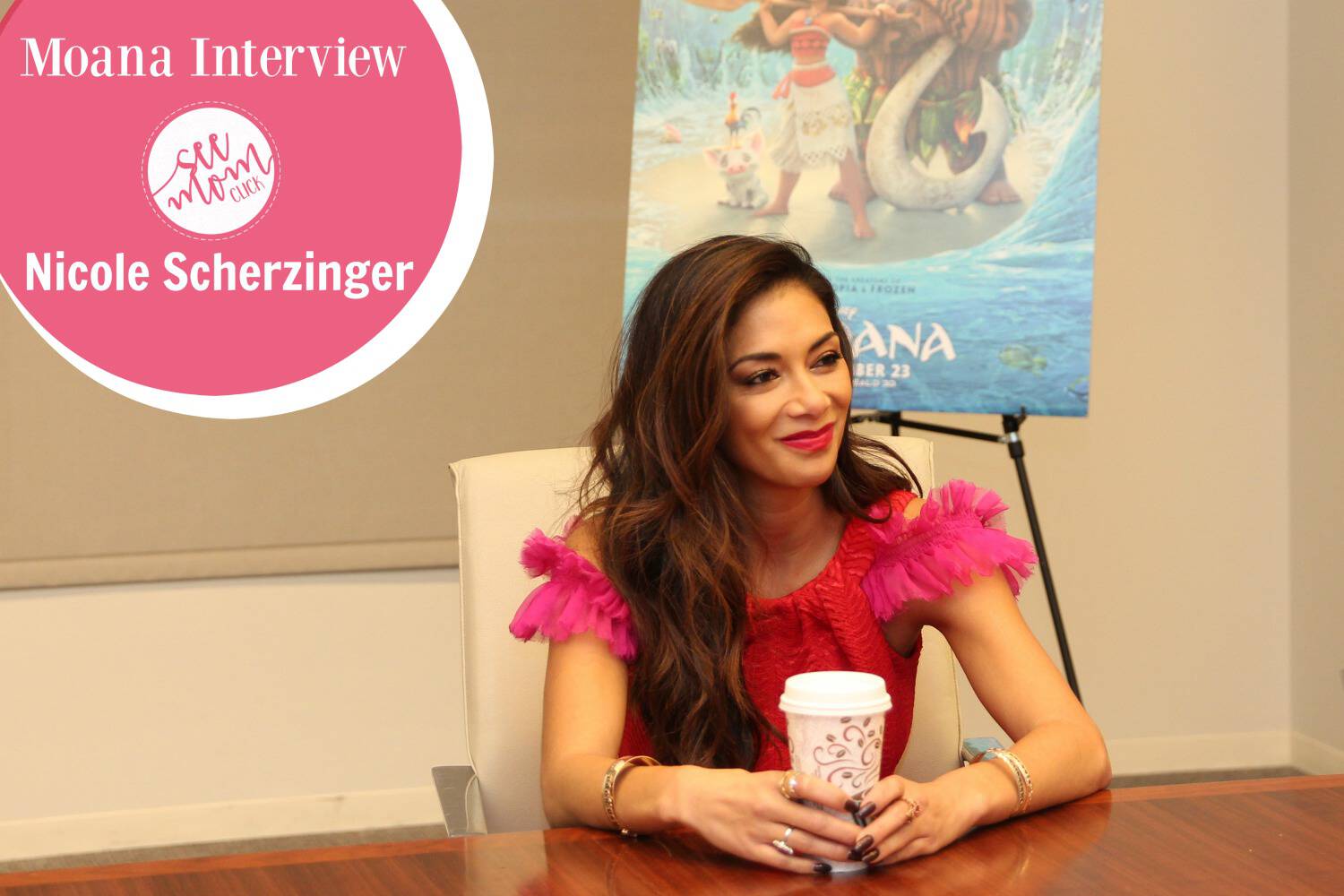 So have you seen MOANA yet in theaters? It’s playing now and it’s SO good, the perfect break from your holiday scramble. We were traveling this weekend and listening to the soundtrack the entire car ride. I can’t get enough! My MOANA coverage continues today with my interview with Nicole Scherzinger. You may know her as a Pussycat Doll, or for winning the Mirrorball Trophy in tenth season of Dancing With the Stars. She also is the voice of Sina, Moana’s mother in MOANA.

She lights up the room when she walks in. I mean, check out that dress! Really beautiful inside and out. I love what she had to say about her role in the film, her family, and being grateful.

Sina is pictured above with Moana and Moana’s dad, and she has a pretty small role in the film but as a mom, man, it packs a punch. Her support of her daughter is amazing and so heartwarming. Here are the highlights of our interview.

Needing To Be Part of Moana 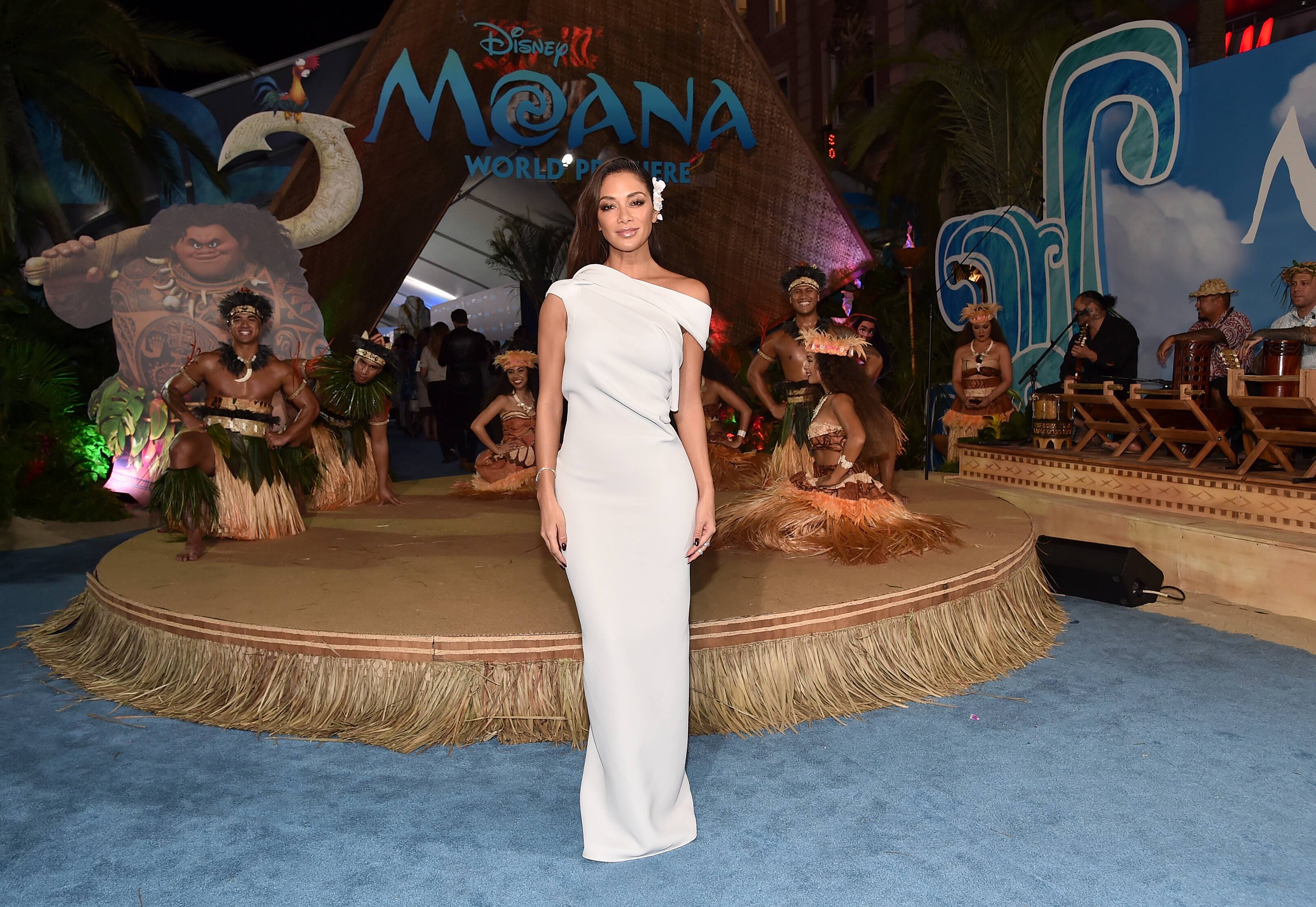 Nicole was born in Hawaii and has a huge family. Throughout the interview she talked about them, and her family roots are so important to her. When asked why she wanted to be part of MOANA here is what she had to say:

That’s because I’m from Hawaiian descent, so I knew that the movie was going be about the Polynesian people.  I don’t think Disney ever really did a film like that. It’s the story of our people, where we come from.  And I’m just so proud that Disney did right by us, by the Polynesian people, and stayed true to our culture, where we come from, our power, our people, our lifeline and, just told a beautiful story about a young girl.

It wasn’t a love story. It was a heroine story about a young girl’s journey, which we can all relate to about discovering who we really are and what we’re meant for.  What our purpose and our destiny is.  And that’s a beautiful story, and then I have the honor of playing Moana’s mother, Sina.

They’re trying to give me the back story, and I was like, please, I lived this. I lived with my mother and my tutu, which means grandmother in Hawaiian.  In our culture, the men are the head of the household, but the women are the backbone.  They are everything.  They are the strength.  They keep it together.

It’s great for girls and boys to look up to someone like Moana, how strong-willed she is, and it’s such a positive story.  It’s so beautiful.  You get to see a little bit of where we come from.

Her First Time As An Animated Character

Nicole has had the opportunity to sing, act, and dance all over the world, but this was her first time voicing an animated character. We asked her how that was different from her other performance roles.

Doing this movie was such a new experience for me because I’ve never been an animated character. And when you’re acting, you’re not acting to the other character. You’re acting with another person giving you the lines.

“You have to just imagine everything, to be so creative in your head.”

They show you these sketched out drawings of your character in the scene and everything looks like penciled in. You just have to kind of close your eyes and put yourself there and kind of be extra animated.

I thought it was hilarious because they had cameras all throughout the whole recording studio. They see all the different expressions of your face and try to incorporate it into the character to bring it to life as you.  So you have that going on and I probably looked crazy when I was doing it.

One time I was recording and I closed my eyes and they’re like you’ve just seen Moana for the first time.  She’s back.  And I was running, and I was feeling it, and the breath had to be right.  And emote the right energy.  And the hug was like, okay, a soft hug and then a hard hug.  And I looked, I woke up and I opened my eyes and I felt like wow, we really did something.  And I was literally on the opposite end of the room from them.  They’re like sorry, we didn’t want to disturb you.  You were in it. It was such a cool experience.

Connecting With Her Role as Sina, Moana’s Mother

As I mentioned, Sina didn’t have a huge role in the film in terms of lines, but her role as Moana’s mother and her support of her daughter was instrumental in Moana finding her way – which was really the story of the film. We asked Nicole how she connected to this role and here’s how she responded:

It was interesting because in the script they had a couple different readings, different ways they wanted to get the story across.  Especially the part where she’s trying to explain to her daughter that you can’t go beyond the reef because your father’s been there and he’s had a great loss and he’s just trying to protect you.

“Anything that I do, I draw from personal connection. And I think she says a line.  She says, Moana, sometimes who you are or who you want to be, it’s not meant to be.  And I drew from that experience and I drew from my mother.”

I was like how do I turn this into a positive?  Because she was saying it’s not meant to be.  And I felt that it was a bit negative, you know, because we’re always like, no, you can do it.  You can achieve it, which is why she actually lets her go in the end.  So how can I make this make sense to me?  And it was just kind of speaking from experience.  Sometimes you have to look past yourself. But then I think in the end she does know that she trusts Moana and allows her to go and find her destiny.

That’s why moms are so great, right? That’s what moms do.  They create that structure and they teach you.  My mother always told me growing up, Nicole, I just never want you to compromise yourself.  And then at the end they have to just have faith and trust that they raised you the right way.

On Gratitude And Purpose

The most impressive thing to me about Nicole is how gracious she is. She talked so much about being grateful for everything that comes her way, and about being focused on fulfilling her purpose in this life. Some real words of wisdom and just a refreshing point of view. Here are some of the most meaningful takeaways:

I don’t take anything for granted, especially where I come from, with what I do.  Anything I see.  I’ve been all over the world.  I’ve seen the most beautiful things.  I’ve done such amazing things.  Within this past month I’ve performed with Andrea Bocelli several times. I’ve perform with my dear friend, Prince. Working on a new project with these people that is something I never thought I would do. It’s such a blessing.  No matter what you do in life, you cannot ever take any of it for granted.

When I was a little girl I came from nothing, but for some reason I felt like I was meant to be Whitney Houston. I knew I was meant to sing and to be a voice.  And it’s interesting, my life has taken different paths. I don’t regret anything, and I’m very grateful for everything.

“I believe we’re all made for a purpose.  A great purpose.  And I haven’t got there yet.”

In interviews people are usually like, wow, you’ve done so much.  What is there left to do?  And I’m like, that’s funny, beause I feel like I’m just scratching at the surface and I’m just using a fraction of my potential. I’ve got everything left to do.  So it’s taking that time.  It’s carving that time out now for myself to create what I feel like I was made to create.  I can’t die with this in me.  So I have something that I want to create, a project, and I want to share- and that will be my legacy that I want to leave behind.  So I’m working on it.  And I’m getting there.  Obviously God has His own timing.

I’m very grateful for where I am. You have to look at it and be like this is what led me to be here, let me run and grow from this.  But this is where I really see myself and this is where God made me.  So let me get myself on track and focus and get it together.

“No one else is going do it for me.  I have the vision and I’m going there.”