I was provided with a complimentary copy of Monsters University on Blu-Ray to facilitate this review.  The opinions in this post are 100% mine.  You can read my full disclosure policy here.

Monsters University comes out on Blu-Ray Combo Pack on October 29,  just in time for Halloween.  Of course! Those monsters think of everything.   😉    We got an early copy to check out and and it has been well loved since arriving on our doorstep.  My kids LOVE this movie and so do I. It’s flat out hilarious! 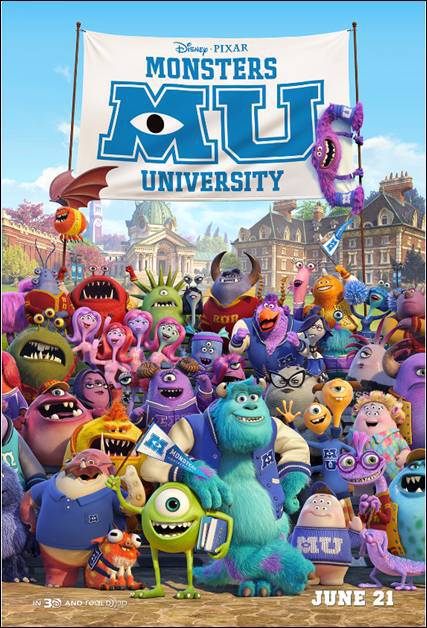 We took the kids to see Monsters University in the theater (see what we learned!) and had such a good time watching on the big screen. Now that we have the DVD at home I’m actually enjoying it even more. There are so many funny lines slipped in that I hadn’t picked up on the first time around.  The messages of the movie, friendship, perseverance, and believing in yourself, never get old.  But it’s the laughter that keeps us comin’ back for more!

This is one of  my favorite clips from Monsters University:

I just love the Oozma Kappa brothers. They’re a total riot and the MOM!! Omigosh I love that woman! She cracks me up in every scene.

Ever since college-bound Mike Wazowski (voice of Billy Crystal) was a little monster, he has dreamed of becoming a Scarer—and he knows better than anyone that the best Scarers come from Monsters University (MU). But during his first semester at MU, Mike’s plans are derailed when he crosses paths with hotshot James P. Sullivan, “Sulley” (voice of John Goodman), a natural-born Scarer.  The pair’s out-of-control competitive spirit gets them both kicked out of the University’s elite Scare Program. To make matters worse, they realize they will have to work together, along with an odd bunch of misfit monsters, if they ever hope to make things right.

Monsters University on Blu-Ray has TONS of awesome Bonus Features!

I’ll admit, I don’t always watch the Bonus Features on DVDs but Monsters University is special to me because it was the first Disney press trip I was invited to attend (even though I skipped class).  So I actually wanted to check out the extras and I’m so glad I did!  Honestly, the bonuses are so cool. Even my kids were glued to the screen.  One thing I’ve learned about Disney is that everyone there is beyond talented and they work hard and play hard. 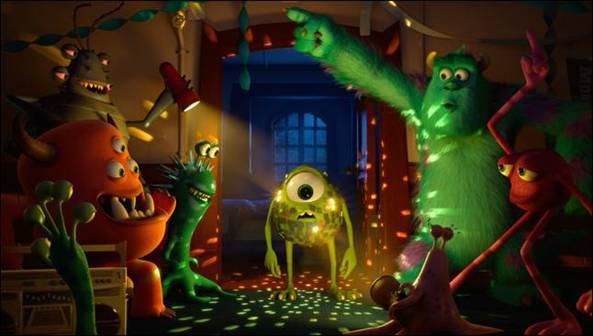 Here are all the bonus features on the Blu-Ray Combo Pack:

I absolutely love “The Blue Umbrella.” Even my husband said how cute that short film is.  It’s amazing what kind of story can be told with no words and no people.    I also really got a kick out of the Scare Games at Pixar!  Are you guys hiring? I’m sure I can do something helpful!  And finally topping my favorites list was the Deleted Scenes.  It’s really neat to see the additional movie scenes and hear the director, Dan Scanlon, talk about the story behind each scene and why they made the decision to cut it.  The movie is even more meaningful with all this background information.

Order Monsters University on Blu-Ray for your family’s collection.  This is a must-have for Disney fans. It’s absolutely one of our favorites, and I speak for both the kids and parents in the house.  You know we don’t always agree on what to watch on movie night but this one is a win for everyone!

Monsters University comes out on Blu-Ray on October 29. Get your scare on! http://t.co/4rnceo3WDf #MonstersU