So Disney invited me to Hollywood for the Monsters University Premiere this week and I was SOOOOO excited!  I shopped, I packed, I made friends with my sorority sisters on Twitter, I filled up on college spirit.  And apparently I channeled a bit too much college-aged Lindsay, because in the end I skipped class.  It wasn’t my fault, though! My dog ate my homework. Oh, and my car wouldn’t start.  And would you believe I came down with a terrible stomach flu the morning of my final?  Alright, alright. None of that’s true.  You want the truth?  It was hot and I couldn’t get the air conditioning in my car to work so I couldn’t back out of the garage to drive to school.  And by car I mean plane, and by garage I mean Harrisburg International Airport, and by me and I mean Delta Airlines.  Short version: My flights had so many problems the morning of my trip that I arrived in Los Angeles too late to attend the premiere.  SUCK. 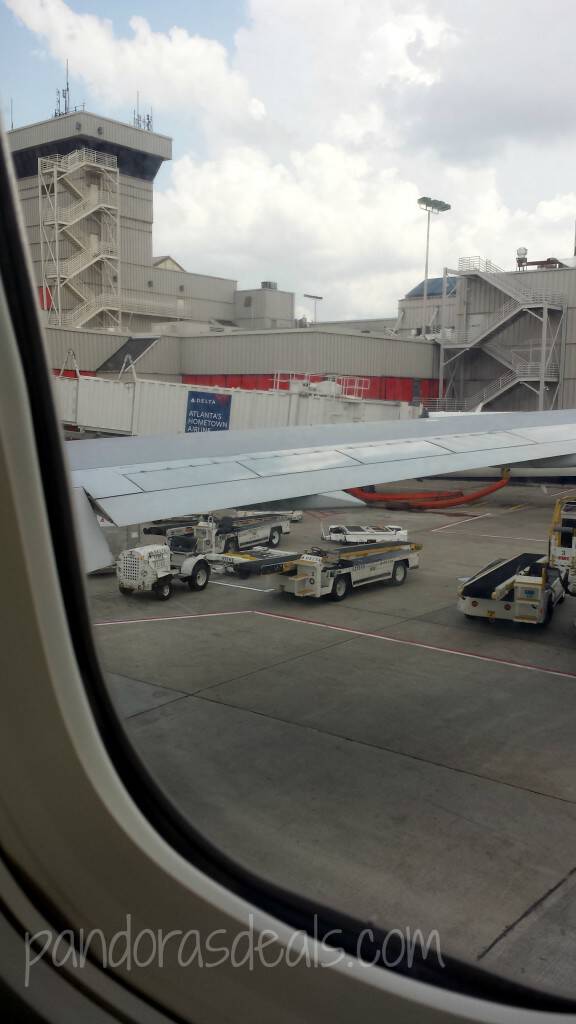 But, let’s remember that I was still full of college spirit and after a couple of deep breaths I decided I to go with the flow and make my own adventure out of the day.  So while my sorority sisters and frat brothers were donning blue and white at the tailgate party of a lifetime, I was having exactly the kind of fun you have when you skip class. 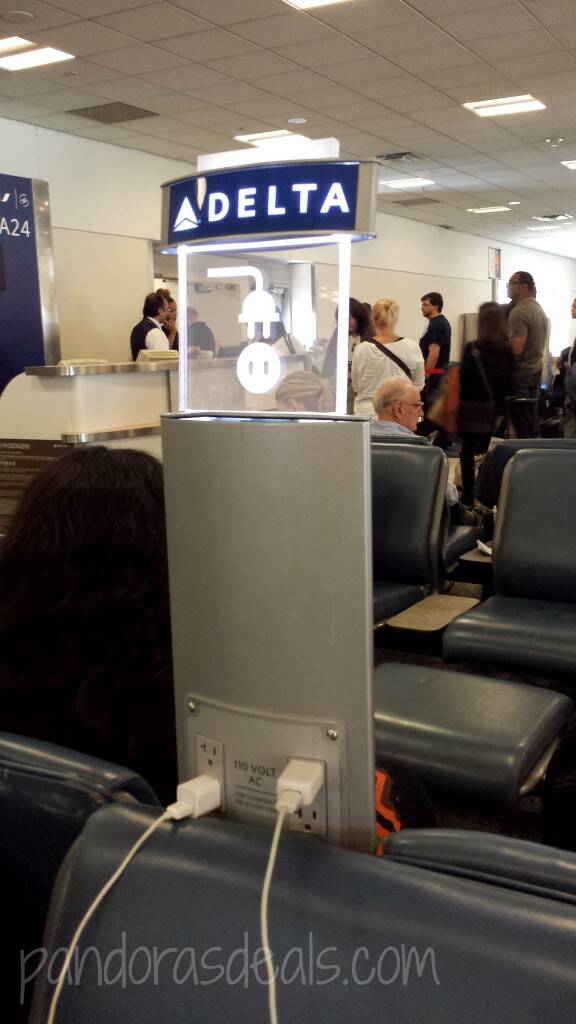 Plug-in, baby.  The one thing Delta managed to get right on this trip was providing tons of places to juice up.  I mean, what kind of day can a college kid have if I can’t tweet and Instagram my way through the airport?  Text messages?  I sent about 1000.  I talked to my kids. I talked to my husband. I messaged friends I haven’t talked to in a year. Hey, let’s catch up while I have all the time in the world.  I tweeted, I retweeted, I favorited tweets. I had a few hashtags in mind for Delta Airlines, but I’m a professional here, keepin’ it clean.

Chocolate and Alcohol: It’s What’s For Dinner.  After rushing around from airport to airport, ain’t nobody got time for a healthy meal. And when you’re sitting on the tarmac in Atlanta for nearly 3 hours, there’s really no place to buy dinner anyway. Thankfully the flight attendants came around with a cart full of drinks and snacks and in true college spirit, I made a meal of M&Ms and a Bloody Mary. The drink was on the house (rightly so) but I paid a whopping $3 for a single serve bag of M&Ms. I’d have paid $20. You can’t survive a college crisis without chocolate and a good mixed drink.  By this time the flight was in air and I couldn’t snap a pic because you can’t have your phone on while you’re flying, so instead I’ll share this pic of a guy in a Snuggie because that’s also definitely worth sharing.

Catch up on old movies.  When I was in college we used to rent VHS tapes (OMG, I’m old) from the video store. Now you just tap a few buttons on the touchscreen on the seat in front of you and you’re laughing along with Fat Amy.  I was long overdue to see Pitch Perfect, and on that particular 4.5 hour flight I watched Silver Linings Playbook, too.  All I need is a few more delayed flights and I’ll officially be up to speed with the latest releases.

Make new friends in random places.  This is Loraina.  She sat next to me on that nightmare flight from Atlanta to Los Angeles and we made fast friends.  What did J.K. Rowling say in Harry Potter and The Sorcerer’s Stone? “There are some things you can’t share without ending up liking each other, and knocking out a twelve-foot mountain troll is one of them.”  I’ll add that you also can’t share a flight experience from hell with someone without ending up liking each other.  Loraina and I chatted, she shared her Pita Chips with me, I shared my M&Ms with her, we watched movies, we rolled our eyes, we bonded.  I gave her my card and a hug when we finally landed and parted ways and hope I’ll hear from her soon.

I found a silver lining of my own.   When someone is standing at the gate with a sign with your name on it after you’ve been on a plane for more than 7 hours, the man is a hero. Meet Mike.  I spent about an hour with Mike and it was probably the highlight of my crap day.  About the nicest guy you’d want to meet, Mike helped me retrieve my luggage, carried it to the car he had ready to drive me to the hotel, and then the man made my day.  He told me that earlier in the day he had picked up Armie Hammer and his wife and their dog and driven them to a private plane at the airport.  You know what came next. “Which seat did he sit in? Has anyone sat in it since?”  And that’s when I collected my consolation prize:  I was the next person to sit in the same seat as Armie Hammer.  It’s *almost* like we touched.  Fate, I tell ya.  He’ll prolly call me later this week.

Turns out I met a celebrity, too. Mike, originally from Dallas (yes, I basically interviewed him and I even took notes while he was driving), told me about some of the stars he’s transported: Patrick Swayze, Sienna Miller, and Harrison Ford to name a few. I mentioned Armie Hammer, right?  Thought so.  Mike also starred as an extra in Pirates of the Caribbean and got to meet Johnny Depp, Orlando Bloom, and Keira Knightly.   Told ya, celebrity right here.  He was so fun to chat with and I finally felt like I was getting where I was supposed to be, despite the fact that I got there about 9 hours later than planned.  Mike, my friend, you are a star in my book!

The lesson here: I made the most of a bad situation. I mean, if you’re going to skip class you might as well enjoy yourself.  But kids, stay in school. Go to class.  Do your homework.  While I was slacking on an airplane, look at some of the fun that was going on at the Monsters University Premiere!

The event kicked-off with a tailgate party on Hollywood Boulevard, complete with the MU pep squad drum corps and cheerleaders, the Disneyland All-American college band, and an appearance by Mike and Sulley! Also, ESPN College Scareday provided play-by-play commentary on the blue carpet.  Doesn’t it look amazing?!  I’m so bummed that I missed it but luckily my more diligent classmates have some great pictures and inside scoop you can check out too!  Visit Fabulous Finds by Tiffany and The Frugalette for a better look at the tailgate party.

Though I missed this party I’ll have LOTS more fun news to share with you from my trip to Los Angeles, so stay tuned!

Monsters University comes out on June 21!

Disney has provided me with an expense paid trip to Hollywood for the Monsters University Premiere in exchange for my review of the events of the trip.   No other compensation was given. The opinions and experiences in my posts are 100% mine.  You can read my full disclosure policy here.