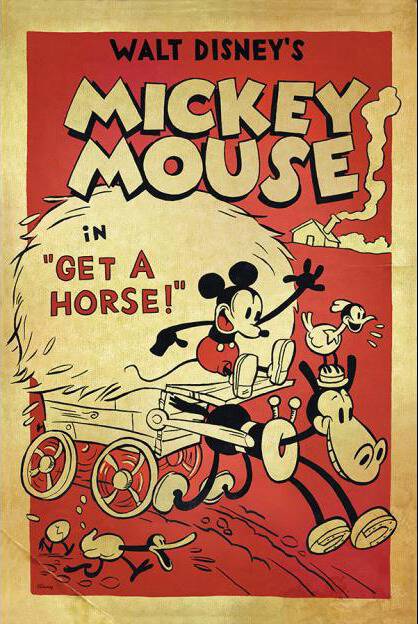 I love it when a Disney movie has a short film that plays before the  main feature.  The Blue Umbrella that played before Monsters University is so sweet and I was really excited to learn that there was going to be a short, and this time a Mickey short, paired with Disney Frozen.  And oh what a short film it is!  I’ve seen GET A HORSE! twice now, once at the Disney Frozen premiere in 3D and once with my family in the regular theater on opening day, and I loved it both times. 3D is pretty cool, though!

As part of the Frozen press day the group of bloggers that participated were fortunate enough to spend some time chatting with the GET A HORSE! filmmakers: Director Lauren MacMullan (“The Simpsons”) and the co-heads of Animation – Legendary Disney artist Eric Goldberg (“Aladdin,” “Pocahontas”) and talented CG animator Adam Green (“Tangled,” “Wreck-It Ralph”).  They were so much fun to talk to! Making this film was an 18-month process and involved 125 people and I really enjoyed learning more about the whole thing! 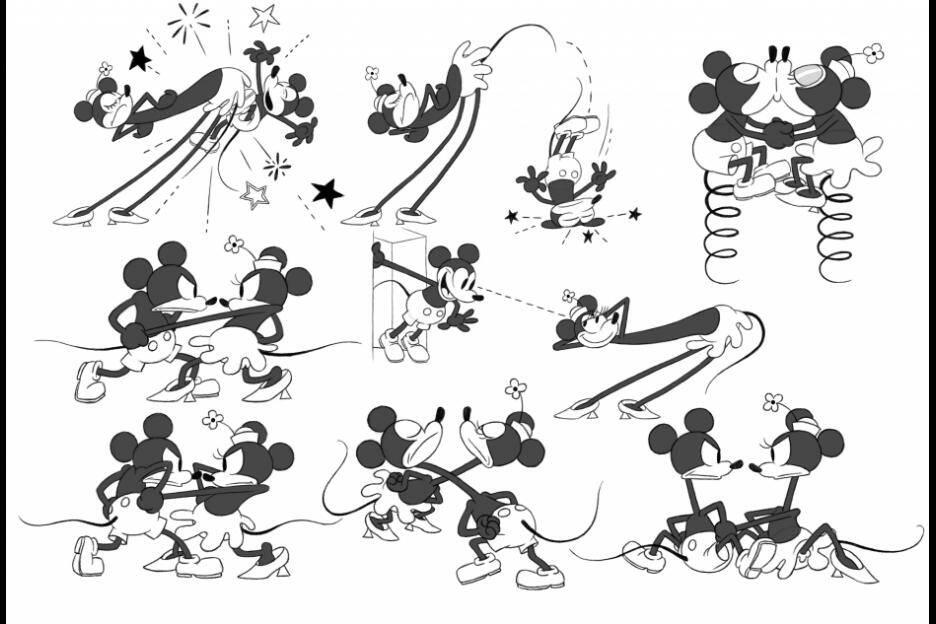 “It’s all new, not a lost short.” – Lauren MacMullan, Director

Let me issue a quick **SPOILER ALERT**.  I’m not going to tell you everything because it’s just way more fun if you see it for yourself, but I have to touch on a couple of highlights because these are the things that make the film so special.  I’ll just say that parts of the short are made to look  old, like the 1928 Mickey, and parts are made to look like modern day Mickey and the gang.  They way they pull them together is the cool part and I’ll let you see that for yourself!

These ‘old’ images you see here are actually new images. No part of this movie was taken from an old short. It’s all new material which presented a challenge for the filmmakers.  Animator Eric Goldberg explained that Mickey in 1928 isn’t the same Mickey that we know and love today. His eyes, body shape, nose, feet, and more were different.  So they had to learn how to draw him how he looked in 1928.  And even after they drew the characters as they were in 1928, they still needed to make the picture itself look old.  I think this is so neat!

“It looks fine, but it doesn’t look like it’s set back in 1928. So we added gate weave, we have dust, scratches, gloom around the blacks to make it look like over exposed high contrast film.”  – Eric Goldberg,  Head of Animaton

Eric then talked us through drawing Pete which was so much fun! I loved seeing everyone’s drawings.  There’s mine above.  How do you think it compares to the real Pete?  Not bad, right?!  Disney has a little clip for us, too!

GET A HORSE! Clip

Get A Horse! Clip on Disney Video

I love where Mickey extends his leg to let Minnie climb up the stairs!  This is only part of the movie, the ‘old’ part (which, remember, is actually  new!).

During our day spent at the Animation Studios, we saw GET A HORSE! exhibits on display that were so cool! I think it’s so neat that they were able to breathe new life into Disney’s original Mickey.  My kids loved the film and I really enjoy having them see ‘old’ Mickey. It did feel a bit like going back in time.

Maybe the very coolest thing I learned about GET A HORSE! is that Walt Disney himself voiced Mickey throughout the entire film. Say what?  Well, Walt was the voice of Mickey Mouse and the filmmakers actually went back and pulled all the dialog from Mickey shorts made between 1928 – 1946 and pieced together all the words they needed to make this film. The one word they couldn’t find?  Red.  It seems Walt never used the word ‘red’ in the old shorts. So they found each sound, /r/, /e/, and /d/, and created the word ‘red’ as Walt might have said it.  Isn’t that amazing?

Just look at that old drawing of Pete.  They should totally hire me. I can do that.

Another really interesting bit of info we learned came from Adam Green, head of CG Animation.  He explained that the entire movie was made in both 2D and CG.  That’s old Mickey and new Mickey for those of us that don’t speak film chat!  And then they put them together to create the film.  See the picture below? That’s barely a sneak peek at how these two worlds of animation meld in this short.

I’ll leave you with this photo: Old Pete with Minnie in his fist and modern-day Mickey on opposite sides of the movie screen.  What happens next? How does Mickey rescue his love?  My lips are sealed. Go see Disney Frozen, which you’re going to absolutely LOVE, and you’ll have the bonus experience of enjoying GET A HORSE! and finding out how Mickey solves this one.

Disney Frozen with Get A Horse is in theaters NOW!