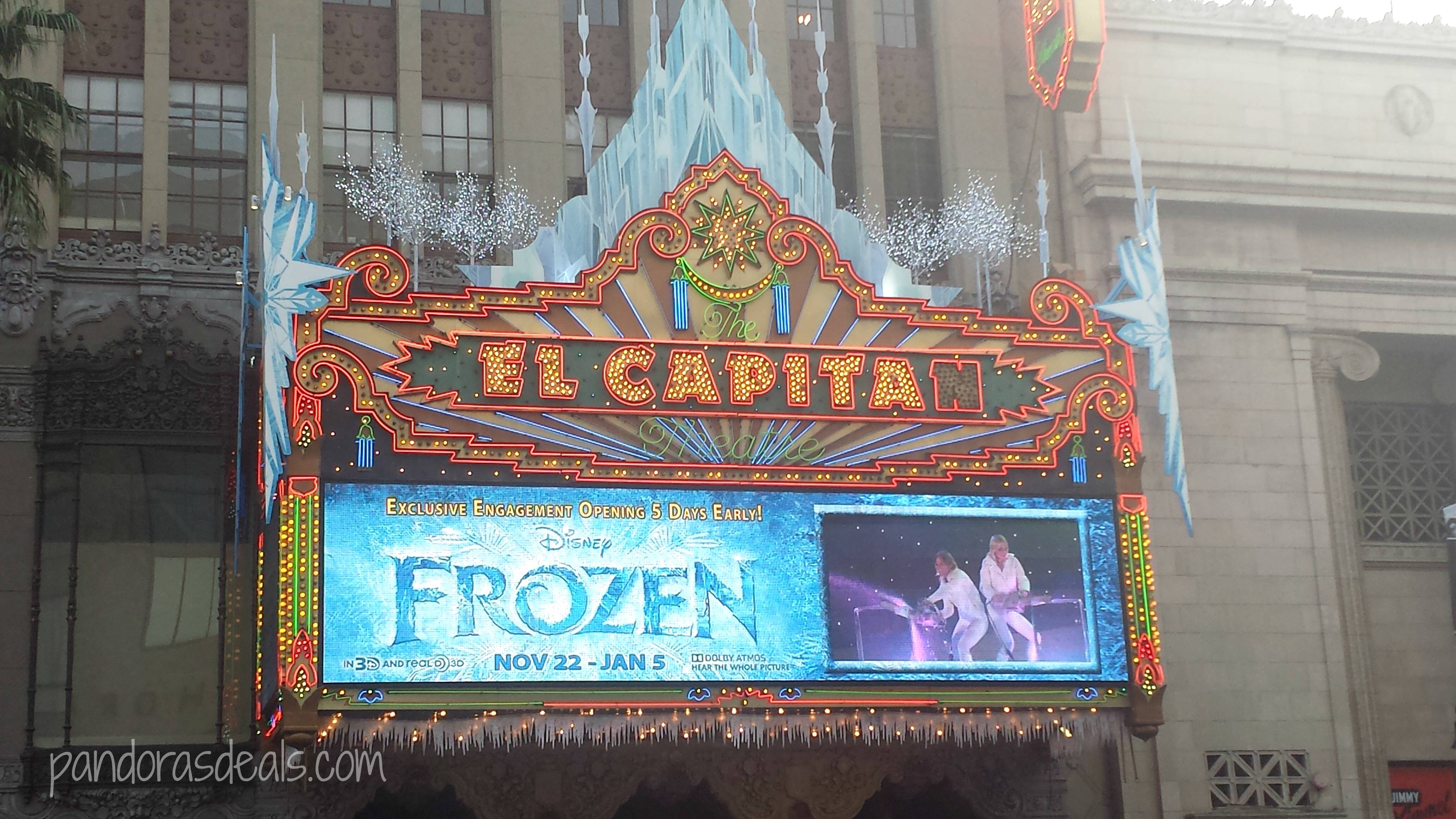 The #DisneyFrozenEvent took place earlier this week and I got some amazing behind-the-scenes looks at the making of the movie which you’ll be able to catch in theaters starting November 27!  But of course the highlight of the trip was the Disney Frozen World Premiere at the famous El Capitan Theater in Hollywood!  What a beautiful theater, and it doesn’t hurt that it’s right next door to the brand new and fantastically amazing Disney Studio Store and Ghirardelli Soda Fountain & Chocolate Shop (more on that later!)! 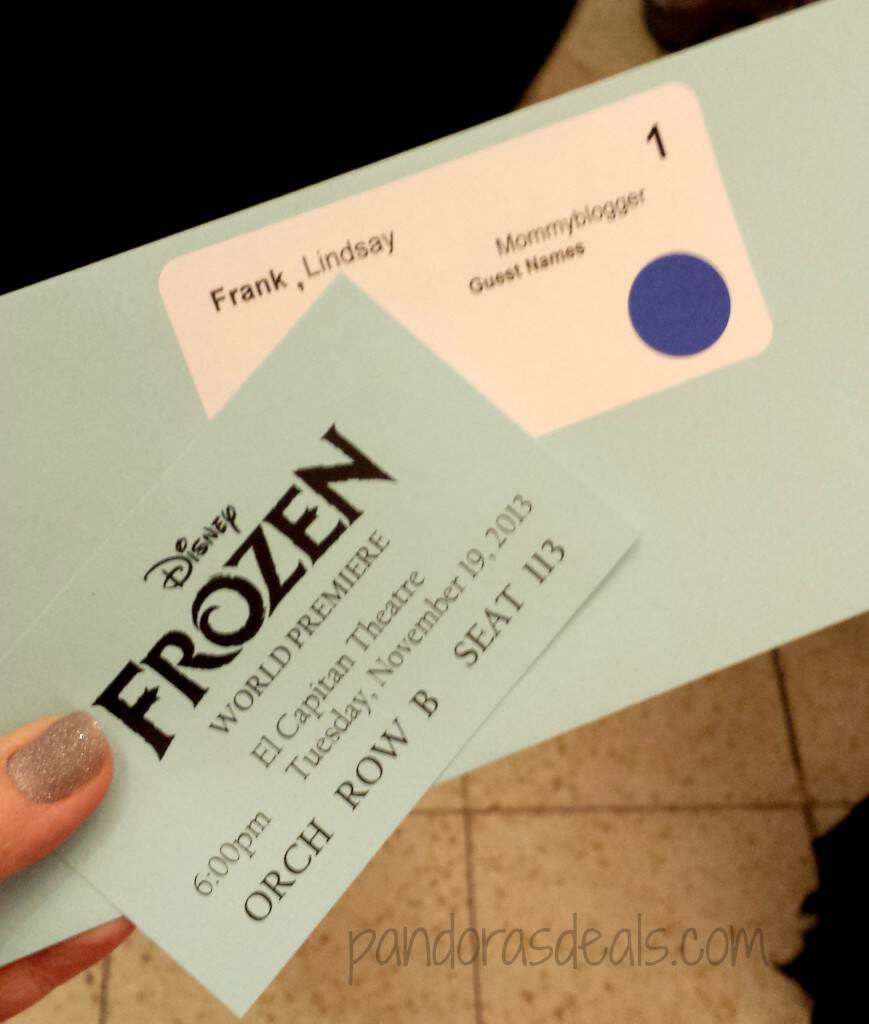 There’s my ticket to the premiere.  How exciting!  I was seated in the second row right behind some of my kids’ favorite Disney Channel actors and actresses.  You’ll see a couple of pictures below. 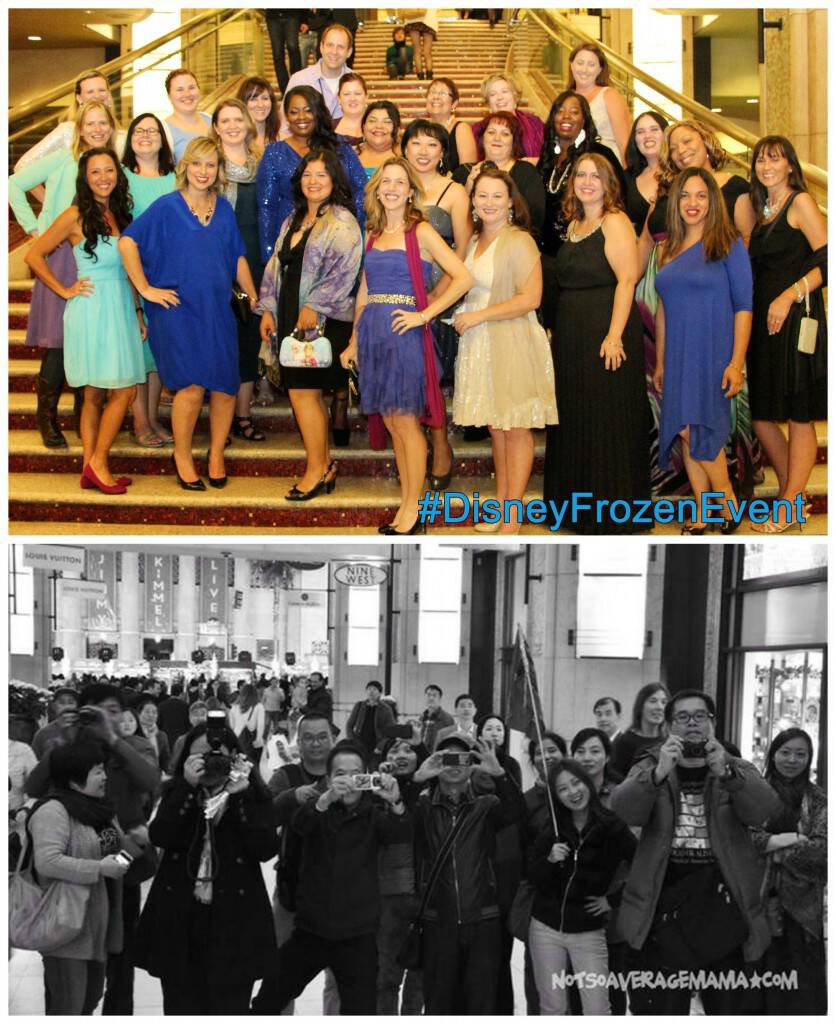 Here’s our beautiful group of bloggers on the Oscar staircase.  We were all set to walk down to the theater and snapped this group photo. While we were smiling for the camera a group of tourists assumed we must be famous and crowded around to take our picture.  So this is what we were looking at, hence the laughing faces on some of us in our group photo. Hysterical, right?  It was so funny. (Thanks to Marshall Weinbaum, Disney Publicist and MomStart for the group photo and Brandy at Not So Average Mama for the shot of our paparazzi.)

My friends Meredith from Suburban Coupon Mom and Keri Lyn from She Saved were so much fun to be with on this trip!  We clean up nicely, don’t we?  What a blast to go with good friends!

Things really got chilly at the premiere! The carpet was white, not the traditional red!  They thought of every detail. They actually brought in real snow and had ice carvers on the way into the theater.

Yay! I made it to the red, er, white carpet!  What an amazing experience it was to be there. I’m so thankful for the opportunity of a lifetime!

Here are some of the stars of Disney Frozen, Princess Elsa, Kristen Bell (voice of Anna), and Josh Gad (voice of Olaf), with Princess Anna.

All of the amazing cast and filmmakers were there!

And there’s Demi Lovato who sings Let It Go on the soundtrack. That’s got to be my favorite song on the disc and there are a lot of great new tunes you’re going to love!

Neil Patrick Harris attended with his family. Omigosh those kids are adorable!

And look who I saw at the premiere!  There’s Stefanie Scott who plays Lexi on A.N.T Farm on the Disney Channel.  She was an absolute doll, so sweet and polite.  I fit right in with the Frozen princesses, don’t you think? And my kids were flipping out when I sent them this picture of the boys from Disney Channel’s Jessie, Cameron Boyce who plays Luke, and Karan Brar who plays Ravi.

I love this picture of Elsa, Executive Producer John Lasseter, Director Jennifer Lee, and Anna.  What an amazing movie they made together!

The premiere afterparty was so much fun with amazing food, drinks, fun games for the kids, a great photo booth, and more ice carvings.  Attending the Disney Frozen World Premiere was so much fun!  I can’t wait to share the rest of my trip with you!