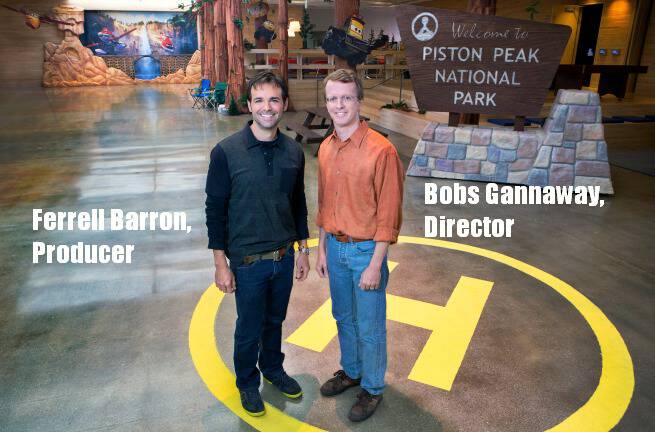 PLANES: FIRE AND RESCUE will be in theaters July 18! I can’t wait to take the kids AND my husband. It’s so much fun for the entire family, trust me!  I had the chance to screen it last month and loved it so much.  I shared with you my interview with the Story Artists and my interview with the writers and creative director, and this week I’m going to tell you about my interview with Director Bobs Gannaway and Producer Ferrell Barron. 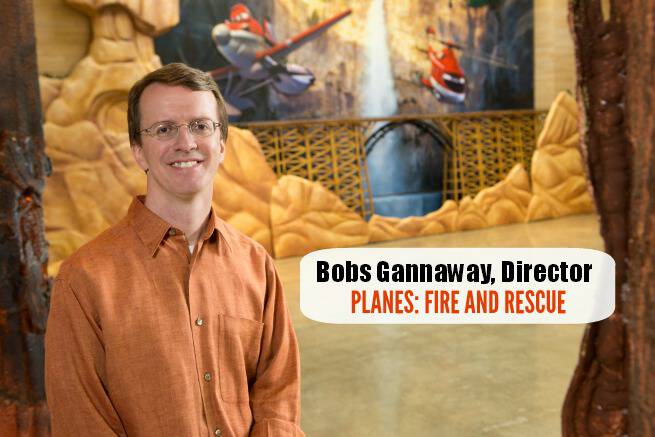 Bobs Gannaway is the Director of PLANES: FIRE AND RESCUE and also known for his work on Secret of the Wings and The Pirate Fairy, House of Mouse, and Stitch! The Movie.  He is so friendly and really easy to talk to.  The group of bloggers got tons of laughs (and lots of great info as you’ll see below) from Bobs. 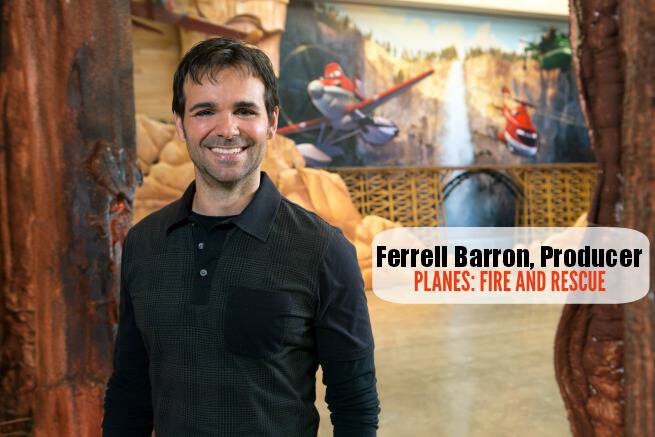 Ferrell Barron is the Producer of PLANES: FIRE AND RESCUE and known for his work on Piglets Big Movie, The Fox and the Hound 2, and The Tigger Movie.  You can take one look at his smile and know he’s a warm, friendly person and he was so fun to chat with.

Bobs and Ferrell welcomed us to the theater and introduced the movie, making sure we knew we were the first group of people to see the final cut!  Wow!  And after we were all blown away by the awesomeness of the film they sat down in front of us to talk to us about making the movie and fielded all of our questions.  The research that goes into making a movie like this feel authentic to the audience is just astounding.  They really know their stuff, both about fighting fires from the sky and about making a killer movie!

There is a TON of research that happens before the movie is written and put into action.  It’s really important to Disney that everything is accurate and true-to-life, so that thesis you wrote in college ain’t got nothin’ on this kind of research. But this does look much more fun.  Bobs and Ferrell told us that they talked to CAL fire, smoke jumpers, fire fighters, helicopter pilots, oil analysis experts and so many more specialists to really learn the ins and outs of fighting fires from the skies.

“So it goes back again to the research, bringing in as many consultants as we can to help every aspect of the movie that related to the story, bringing truth to it all. ” – Ferrell Barron, Producer PLANES: FIRE AND RESCUE

A whopping 53% of the movie is visual effects: smoke, fire, and water. So they really had to study how this stuff looked to make it realistic on film. I was in awe of how realistic the fire looked in the movie.  Bobs told us that they actually went out on training days and had water dropped on them!  There’s a real science to doing this, making sure the water does splash and isn’t blocked by a tree but actually hits the ground.

Learing how to make the fire look realistic on-screen was also “ridiculously complicated” according to Bobs.  But they totally nailed it.  The scale, look, even the sounds which they worked with a smoke jumper on to get just exactly right are all perfect.

The filmmakers spent a lot of time in Yosemite and Yellowstone national parks to study the landscape because they actually created a real national park here, Piston Peak National Park so they had a lot of planning to do.  They explained that the littlest thing can inspire even large pieces of the movie.

Old Faithful was the inspiration for the Grand Fusel Lodge, one of the best puns in the film.

“Research informs everything right down to a gag as well as big feature moments. So you know, just the littlest tiny thing will inform big choices.   It always works its way in where you’re sort of the curator of all of these wonderful things that you get to put together and it’s so much fun.” – Bobs Gannaway, Director PLANES: FIRE AND RESCUE

The lobby at Disneytoon Studios is totally decked out in PLANES: FIRE AND RESCUE decor. I love it! You feel like you’re walking through the movie. Honestly you guys, this is the coolest place in the world to work. Inspiration is everywhere.

Bobs and Ferrell posed for a picture with the press day bloggers.  They were so awesome to talk to.  I hope you’ll all go see the movie when it comes out July 18.  Not only did they make an amazing animated feature that’s going to entertain kids and adults alike, but they paid homage to our firefighters which I absolutely love. I’ll leave you with these final words from the filmmakers.

“The fire fighters are everything you think they are. They were — they were amazing, giving, caring, courageous people, so charming, and so giving with their time and wanting to help. It was really a wonderful experience and they’ve become friends of ours now. ” – Bobs Gannaway, Director PLANES: FIRE AND RESCUE

“We really took this movie to heart. We really put it on our shoulders and we wanted to tell a story that really paid a tribute and gave homage to fire fighters. The biggest goal was not only for kids and parents but we wanted to make the story for them. That’s been the biggest part of this whole project is just making sure that we’re being truthful and making them proud to watch the movie.” – Ferrell Barron, Producer PLANES: FIRE AND RESCUE