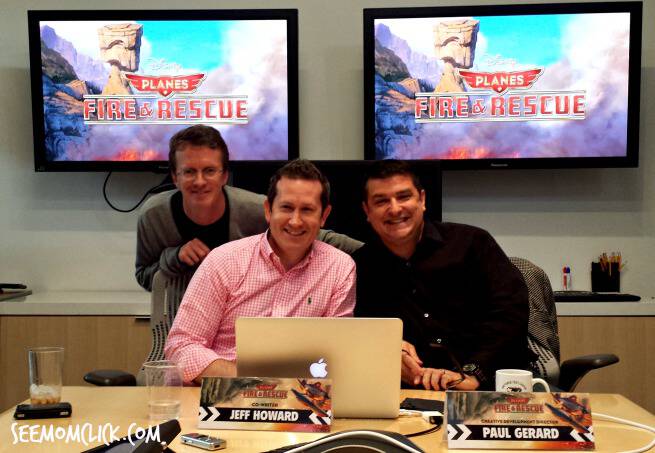 PLANES: FIRE AND RESCUE opens in less than a month, July 18! Are you ready? This movie is SO awesome. I had the chance to screen it last month and loved it so much. Action, adventure, emotion, it’s got everything.  Last week I shared with you my interview with the Story Artists (and my attempt to draw a plane) and this week I want to tell you about my interview with some of the filmmakers about the research that went into making this movie.  I sat down with Jeff Howard, Co-Writer and Paul Gerard, Director of Creative Development to learn more. Lucky for us, Director Bobs Gannaway (left above) popped in to join the chat! 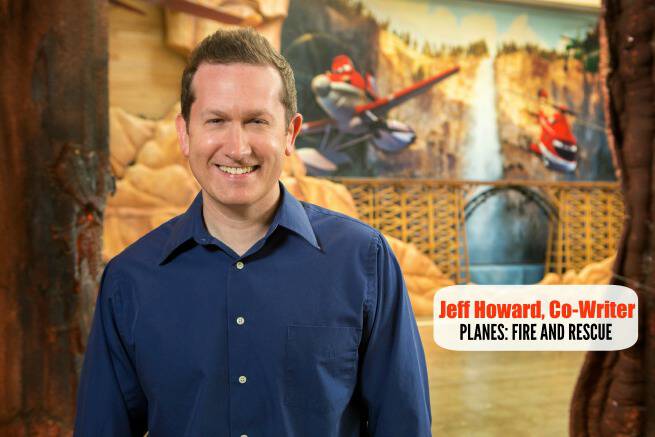 Jeff Howard is the Co-Writer of PLANES: FIRE AND RESCUE and also famous in my house (and beyond) for writing PLANES, Tinkerbell, and The Pirate Fairy, among other Disney favorites.  I think we could live on PLANES and Disney Fairies movies around here. He was a lot of fun to chat with, great sense of humor and really smart and friendly. 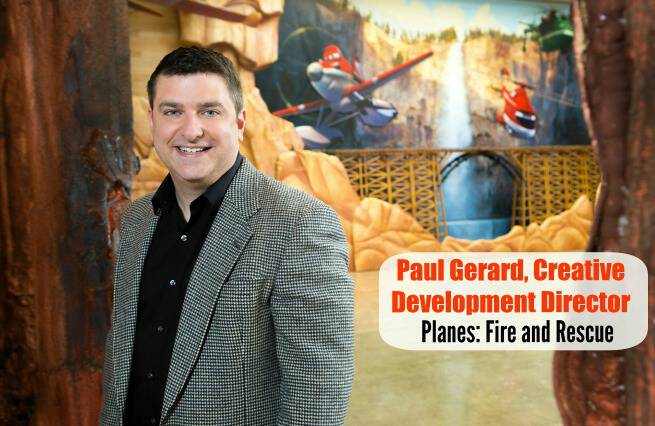 Paul Gerard is the Creative Development Director at Disneytoon Studios and has been with Disney in that capacity since 2008 so he’s helped bring the whole world of PLANES to life for all of us to enjoy. Paul is a really cool guy and I just love the chemistry between him, Jeff, and Bobs (Director).  You can see they all get along so well and have fun together which makes for Disney magic in PLANES: FIRE AND RESCUE.

This concept of ‘truth in materials’ is repeated everywhere with everyone we talked to.  They want to keep the film as authentic as possible so there is a TON of research that goes into writing a movie like this.  The filmmakers worked with Cal Fire really closely to learn all there is to learn about fighting fires from the air.  One of the first things they learned is that very few planes are meant to fight fires. They’re all re-purposed, so this idea of second chances began to take shape in their heads and you’ll see that theme in the movie.  A lot of things that they have at the base are also re-purposed or built from scratch so another idea, ‘better than new,’ began to seep into the film.

This picture above that they showed us is one scared Bobs (though I think he was just being funny!) and one ready-to-roll Jeff getting in a helicopter with Chuck Aaron. Now, I had no clue who Chuck Aaron was but I learned. He’s the best aerobatic helicopter pilot in the world, sponsored by Red Bull. He won’t teach his own son, also a helicopter pilot how to do some of his maneuvers because they’re so dangerous but he took the Disney guys up in the air!

And look at that! They survived!  Check out what they might have endured up there in that helicopter:

Okay that is insane. INSANE.  But wow! What a once-in-a-lifetime experience and Chuck Aaron was a fantastic resource for nailing the authenticity of the helicopters in the movie.

This plane above can fly over a body of water and just skim the top to pick up water, 1500 gallons in 12 seconds, to drop over a fire.  And did you know they don’t just drop plain water? It’s mixed with a solution, like dish soap-type stuff, that makes it stick and not splash.  Who knew? These are the kinds of things you find out when you research the heck out of something.

They had to learn firefighter speak too.  For example, one pilot wouldn’t say to another, ‘Put the water a little more over that way.’  They’d say ‘Come left one wingspan on your next drop.’  All of these details keep the film true-to-life which not only make it awesome but a real homage to the people that risk their lives to protect us. Did you know that in California there’s a grid of people ready to respond to a forest fire and get there within 15 minutes?

Bobs, Jeff, and Paul talked to us about their visits to Yosemite and Yellowstone and how the landscape inspired so much of PLANES: FIRE AND RESCUE. Old Faithful was a huge influence on the Grand Fusel Lodge. You’ll notice it in the movie!  It took the team about a year to write this movie and you can see when you watch it that they did their homework.  It’s amazing, all the work that goes into bringing an authentic story to us in the theaters. You’re going to love it as much as I do!

My interview with the PLANES: #FIREANDRESCUE filmmakers on the research behind the film! http://t.co/cyVzxmB1A9 #FireAndRescueEvent