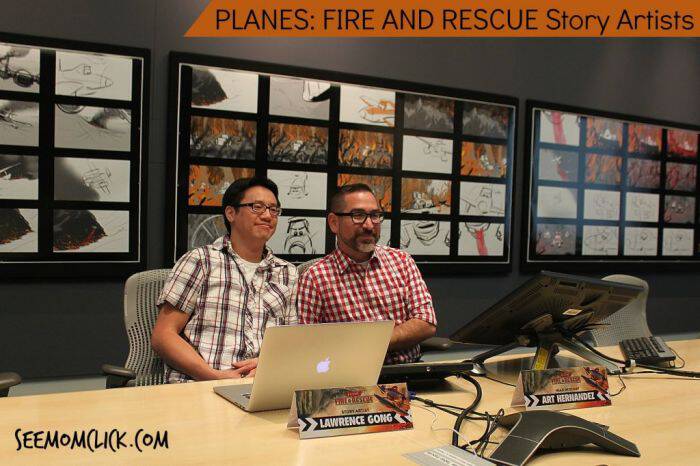 PLANES: FIRE AND RESCUE hits theaters on July 18!  You guys, I am SO excited for this film. I just love family movies in the summertime when you can beat the heat in a cold theater. I’m not the only one, right? And this movie… it’s FANTASTIC!  I loved the first PLANES last summer and I got to screen this new movie last month and I absolutely loved it.  (It’s better than the first one…shhhhh!)  While I was visiting DisneyToons Studios I met the most talented group of filmmakers that brought this amazing movie to life.  The level of detail and research that takes place to bring you the most ‘true’ (more on that later) film possible is mind blowing.

I was really happy to see Art Hernandez, Head of Story again! He worked on the first PLANES (more on that here) and was also the lead Story Artist on this film.  He had Lawrence Gong with him, another Story Artist who is amazingly talented.  (Lawrence did the “Thunderstruck” sequence. It will be your favorite part of the movie.)  So let me boil down how this process works and what I learned. Then you get to see me try my hand at being a story artist. Fear not, I won’t quit my day job. 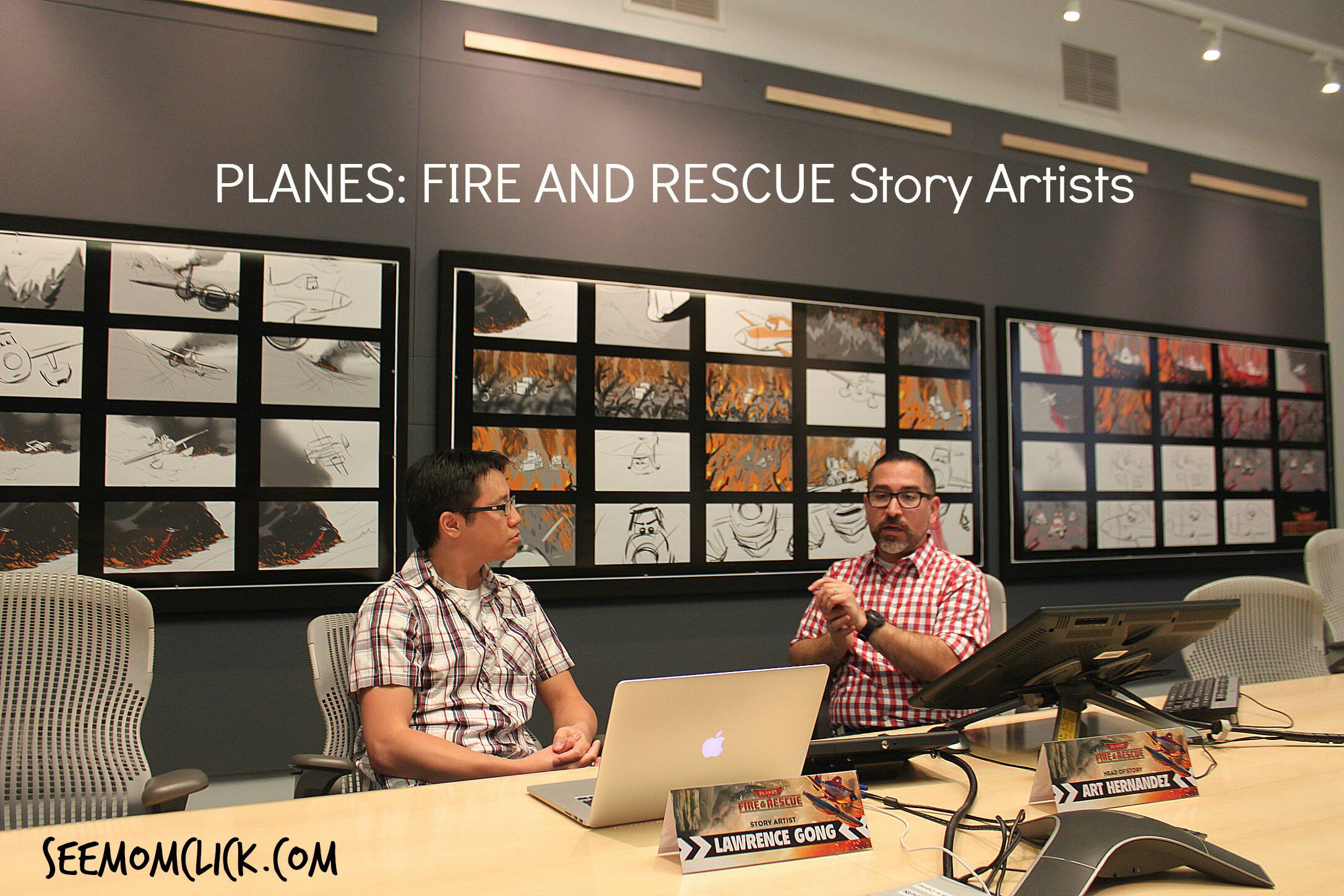 5 Things I Learned From the PLANES: FIRE AND RESCUE Story Artists

1.  When the script is written, the story artists get it next.

It’s their job to turn something written into something visual, the first and only time in the process that a change of mediums like this happens.  So they really have to be the ones to visualize everything and make it real.  Back to that use of the word ‘true’ up above:  The folks that work on these movies talk about ‘truth in materials’ a lot.  Basically if it doesn’t do it in real life, it doesn’t do it in the movie either.  They already have planes that talk so the rest of the movie needs to be as true-to-life as possible.  Tough task when you’re trying to personify an inanimate object.

So they don’t start at the beginning and end at the end. The entire script is split up and each sequence is given to a different story artist.  Some might be really good at drawing emotion, comedy, or action, and so they assign the pieces to each artist’s strengths.  In the end they have what looks like an elaborate comic strip.

These drawings are done on computers.  Some artists took a little time to adjust to that but now they love it.  I personally would appreciate the ease with which you could erase and start over.  They have a really cool set up with a large monitor that faces up more than it does toward the user.

4.  Expression comes in a three-pack.

Back to this concept of truth in materials, it’s really hard to make something like a plane or helicopter show emotion because it can’t do the things a human would do to show emotion. The story artists have a 3-pack of tools to bring make our favorite characters ‘real’ to us: eyes, mouth, and suspension.  That’s it.  Keep that in mind when you watch the movie and I you’ll notice it! It’s amazing to me how life-like they can make inanimate objects with just those three things!

5.  Story artists get to add to the story, enhancing the end result.

As I mentioned, story artists are handed a script and have to draw it out on paper. Art gave us this example:

“You might get one line: “The fire erupted.” And you have to turn that into a story board.”  – Art Hernandez, Head of Story PLANES: FIRE AND RESCUE

That leaves a lot open to their interpretation, right?  The script is relied on as a template but the goal is that each department that works on the movie is going to add something to it, raise the bar a bit before it’s passed on.  So the story artists really get to add a lot to the final movie. In fact, when John Lasseter, Executive Producer, saw the first screening of the film he likened it to the first screening of TOY STORY 3, which was a huge compliment.

” You can’t be married to your work.  You have to be willing to throw a bunch of drawings out and start all over again.”  – Art Hernandez, Head of Story PLANES: FIRE AND RESCUE

Art mentioned this last time I saw him and this, along with the fact that I’m not exactly Picasso, is why I’d be a terrible story artist.  I think this would be so hard for me. You’d find me crying in the bathroom.  #kiddingnotkidding

Art and Lawrence were awesome to chat with. The stuff you DON’T see that goes into these movies is just as fascinating, if not more so, than the movie itself.  Before we left they guided us through drawing Dipper, voiced by the adorable Julie Bowen (my interview with her coming soon!).  How did I do? Be nice!