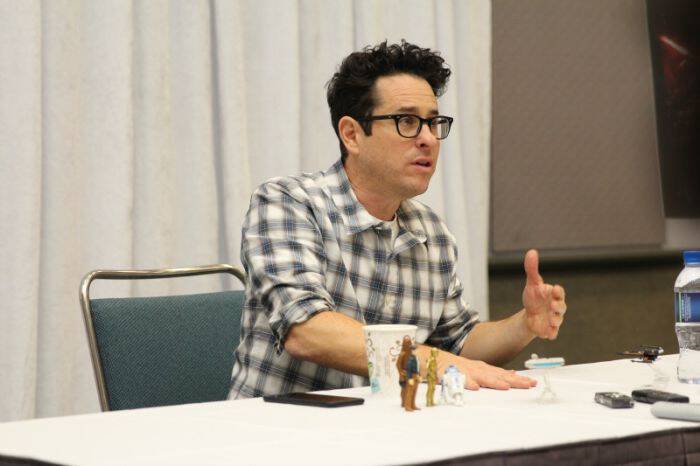 Today is the day! STAR WARS: THE FORCE AWAKENS is in theaters everywhere! When are you going to see it? Or have you already?! This is the last of my exclusive #StarWarsEvent interviews. It might be fun to go back and read them after you’ve seen the film, too! I plan to. I bet there are little nuggets in there that will make more sense to us.

Today I’m sharing my interview with J.J. Abrams, Director of THE FORCE AWAKENS. What a brilliant mind he is. I love how he talked about how he first got involved in the film, why it was important for him participate not as a fan but as a Director, and the story behind some of the film’s music. 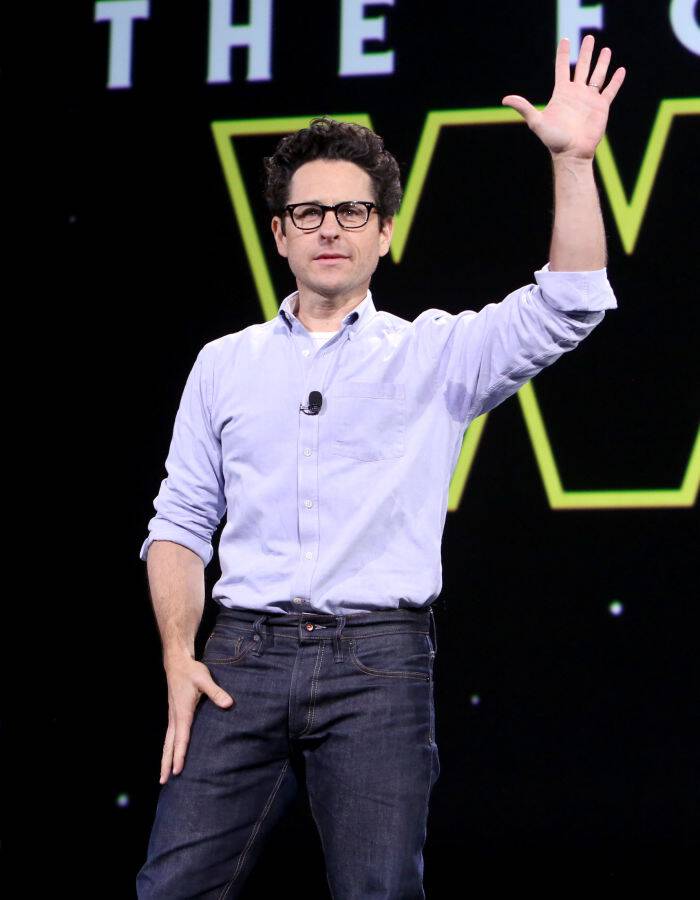 Q: Does the fact that you were not quite 11 when the first Star Wars film was released influence the way that you approach producing this film?

JJA: Of course it did because it was something that meant so much to me for so long.  The thing is that it’s because it’s been ingrained in sort of all of our conscientiousness for so long that it’s become a birthright to just know Star Wars. You’re born, you know what a lightsaber is, who Darth Vader is, you understand that. At three years old, kids talk about Star Wars in a way that is so eerie, because you think how could you possibly know so much? And somehow they do and even those kids who haven’t played the games and seen the shows, I don’t know how it is that they understand Star Wars immediately.

I was surrounded by people like Lawrence Kasdan, who’d written the original Empire Strikes Back and the Return of the Jedi, and actors who had been there from the beginning, all the way through visual effects and sound to, of course, John Williams. Collaborating with him is like cheating, because he speaks to our soul with music in a way that I think is super-human. So the whole process was really about trying to love it but also be hard on it, so that the story meant something and was emotional and not just a fan film. 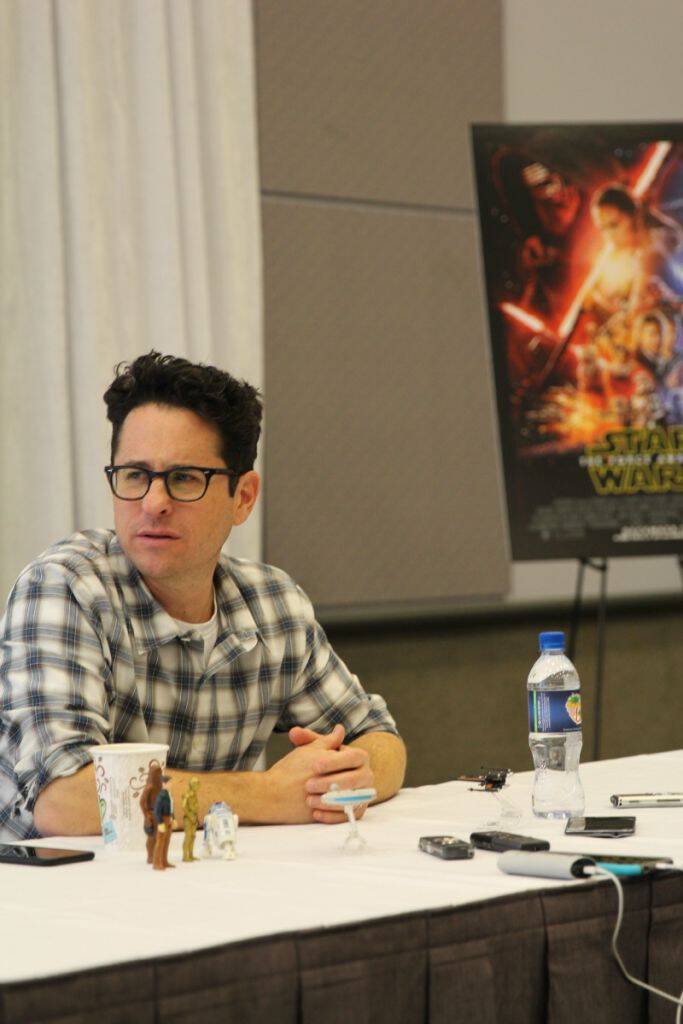 Q: It was reported that you had collaborated with Lin-Manuel Miranda for the music. How did that relationship come about?

JJA : Our 17 year-old son and I went to see Hamilton, which if you haven’t seen it, is one of the great experiences of all time, which cannot be oversold. And you hear crazy hyperbolic language being used about it, and then you go to see it, and it’s better than anyone described it, and gets better as it goes, which is impossible. At intermission, I was thinking it can’t possibly continue at this level, and it just gets better.

I was distracted at intermission by a tap on my shoulder and I turned around it was Lin-Manuel Miranda, who normally stars in this thing he wrote the songs for, but this night it was his understudy. And he said “Hi.” And I was like, “Oh, my God. Do you understand what you’ve done?” He’s like “yes.” I was essentially fawning over him and he said in this jokey, off-hand way, “If you need music for the cantina, I’m happy to do it.” It was so weird because a couple weeks earlier, John Williams had said to me he really wanted to focus on the score.  There’s a lot of music in the movie.

This one scene in the film which is essentially, if we have a version of a kind of cantina scene,  if someone I work with said Star Wars is a Western, there’s a sort of a saloon in every Western, and this was our saloon. John said, I’d rather not work on this music because I have so much other score to do, and this is really source music. I thought crap, what are we going to do. I started working on something as I’m sort of a hobbyist musician myself. So I was working on a piece of music.

Miranda says this to me, I can’t believe it. So I email Lin and I say listen, “I know you were joking, but the truth is we sort of have a need for some music in the scene, if you’re serious.” And he emails back, “I’ll drop everything.” I’m like “Oh, my God. You’re kidding me!”  So we started collaborating on this music and we both use the same music software and we have Dropbox and we would send files back and forth. We came up with this piece of music, actually two pieces of music for this sequence. To get to work with him was preposterously fun.

I got to hang out with him subsequently and if you haven’t seen his appearance on Jimmy Fallon, it’s one of the greatest things you’ve ever seen. It’s freestyle rap, which is actually unprepared in any way, and staggering. He is amazing.

Q: Can you tell us about the beginning of Episode VII,  who asked you to be involved and what you felt when you were first asked?

JJA: It was Kathleen Kennedy, who I’ve known for a long time and she called and asked if I was interested in working on Star Wars. Of course it was a very surreal question and it was very flattering. And my answer was no. Partly because Katie, my wife, and I had plans to take our kids away. I’d been working on a lot of back-to-back projects for a while. Partly because I’d worked on a number of sequels, and it felt like enough is enough. And partly because I care about Star Wars so much that the idea of taking it on felt like a kind of a thing that I couldn’t imagine, and intimidating.

So I said no thank you, and she said “Can we get together?” I said yes. And when Kathy Kennedy and you get together, she’ll convince you of whatever it is she wants you to. She just was amazing and basically said this was going to be an opportunity to continue the story since Return of the Jedi. And I just, as we were talking, realized this is 30-some years after the fact, the main characters would have been born 10 to 15 years after that movie.

They’d be looking back on what we know of the story, that it would be ancient history for kids who were 19, 20 years old. What do they know? What do they believe? And what do they believe in? The idea of finding these young people who exist in a Star Wars universe was so compelling to me, and that feeling of rediscovering a world and a feeling that was so powerful for growing up, was undeniable. After the meeting, I went downstairs and found Katie, my wife, and I just said “I think I really want to do this.”

And she said “Really?” I said “Yes.” And she said, “You know, this is definitely a once in a lifetime opportunity. And you really need to consider it, if this is something you want to do.” I did and it wasn’t an easy for us, our family, my company, Bad Robot.

There were a lot of issues that came with it and yet I knew that as challenging as it would be that if we could do it right, that it could be an extraordinary situation and an amazing experience, and in every category from prep and figuring out the story and writing the script with Lawrence Kasdan and designing the movie and shooting it and editing it and doing post and scoring it.

Q: Everyone’s fallen in love with BB-8 already. How did the idea for him come about?

JJA: We were working on the story. We knew we had a droid that was going to be a critical piece of the puzzle, but we didn’t know if he was going to be sort of bipedal, like 3PO, or roll around like R2 or some other thing. And I just had this idea that  if we had a sphere and then a semi-sphere on top, you could get quite a bit of expression without a face.

And so I drew a sketch of BB-8, and I had the eye and little antenna and everything and it didn’t have a color pattern and it didn’t have all the critical details that Neil and his team brought in, but I sent that to Neal Scanlan and he began to come up with designs that would sort of follow that. It was amazing how quickly it looked like it could work. I didn’t know if they would be able to create something that could be performed on camera, which I knew was going to be important.

And they did, and I will never forget the first day that we came to their offices to see BB-8 being performed after we had agreed on design, scale and everything.  We walked in and Brian, the puppeteer, came out and wheeled out BB-8 on his rig. Literally within seconds, Brian disappeared, and this thing was looking around, curious and you could feel the soul because Brian was imbuing him with life.

Every time we weren’t shooting and we were on a break, and BB-8 was just sort of sitting there and not being performed, it was heartbreaking, because he was this inert thing and you were like “where is he?” And then Brian would get him, and you’d be like, “There he is.” It was this very odd and very important thing, but it was a result of Neal Scanlan and his amazing team.

Q: Being here to help relaunch this saga for a new generation of families, and you’re kind of passing the torch to future directors that are going to be exploring this in different offshoots and what not, will you be able to really sit back and enjoy it as a fan now without thinking of what your creative stamp would be as the saga continues?

JJA: I knew getting involved in this project was an honor. I knew that my role would be as temporary guardian of this saga. I knew also as I was working on it that if the movie works, what a great time to step down. And if the movie doesn’t work, who wants me to work on the next one anyway, you know? So it was win-win.

You can hear more from J.J. in the press conference video above.

STAR WARS: THE FORCE AWAKES is in theaters NOW!
Retweet and tell your friends!