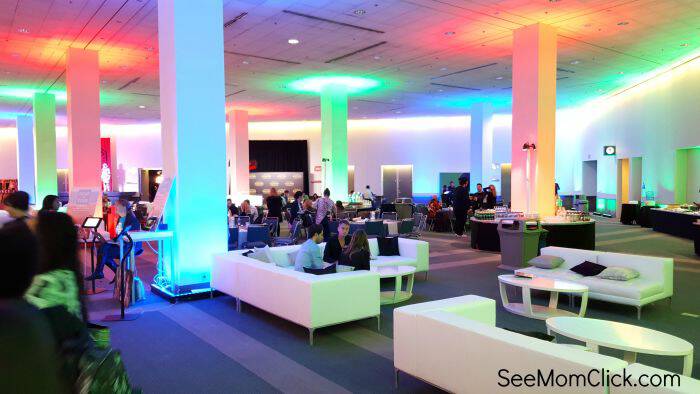 If you’re following me on Instagram and Twitter you got to see some of these pics of my experience at the STAR WARS: THE FORCE AWAKENS press event. I have SO many more to share and picked out my favorites to put in this post. Let me tell you, as a Star Wars fan, this was so much fun, such an amazing experience. I hope you get that feel looking through these photos.

This is the first floor of the event venue and you could pretty much walk around the perimeter of the room and check out all of the things you’ll see in the photos below. But I just LOVE the overall look of the room. The colored lights make the pillars look like light sabers! 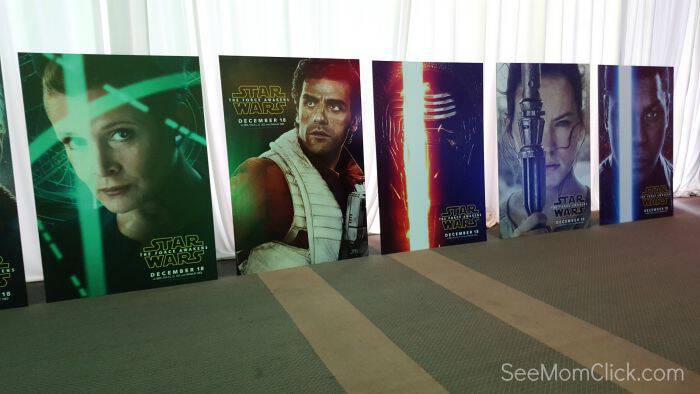 These HUGE posters were lined up against the wall. Did you know there are a bunch of characters in the movie that we haven’t seen yet? So many secrets! I can’t wait to see the movie and learn who they are. 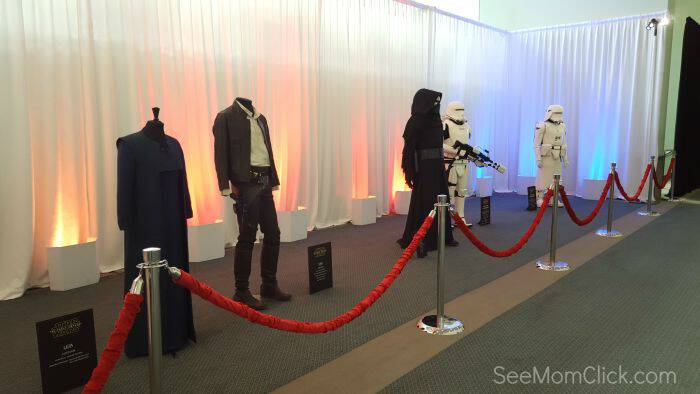 Throughout the venue the characters’ costumes were on display. This was awesome, and from left to right you can see Leia, Han, Kylo Ren, a Stormtrooper, and a Snowtrooper.

The signs below each told more about their costumes. This one is designed to withstand frigid temps. Another Battle of Hoth coming in Episode VII? We’ll see!

Leia and Han’s costumes were my favorite. They just take you back, don’t they?

But we love the bad guys in my family and I cannot wait to figure out who this Kylo Ren character is! He looks perfectly evil in the best way.

Captain Phasma is another new character and this role is played by a woman, Gwendoline Christie. I ran into her in the bathroom while I was at the event and she is SO tall and just stunning for this role! An evil stormtrooper leader that’s a woman. I love it!

The good guys’ costumes were well-represented too. From left to right, these costumes belong to Finn, Rey, and Poe. Stay tuned because I interviewed all of them and will share those posts all next week!

Everyone’s favorite droids were there for a photo opp too!

Meeting R2D2 and C3PO is like being a kid again. I was SO excited! And they were real, they moved and beeped and everything!  😉

This is BB-8, the newest droid and he is just adorable. I wanted to take him home.

See, we have matching head tilts!

And he posed for a selfie with me in the dessert. We’re BFFs now.  ha!

I got to check out a bunch of the new THE FORCE AWAKENS merchandise. I’ll take one of everything. Seriously though, the BB-8 suitcase is so cool and I love this t-shirt for women! There’s a ton to choose from for adults AND kids.

I’m a mug collector (we are running out of room!) and might need all of these. Definitely the Kylo Ren mug!

There’s plush, scooters, figurines, costumes, shoes, everything! This is going to be a fun Christmas for us!

I loved learning about this. Kids can get a chance to learn how to code anytime, anywhere! Go to code.org/starwars to see how you can get your kids involved. The number of women in computer science is really lacking right now so get your daughters involved!

Life size stormtroopers guarded over the entire event floor. Aren’t they cool? I was too short to selfie with them! ha!

And this is a picture of the larger press conference. I was pretty far back and didn’t get a great shot of the stage, but stay tuned for my interviews over the next several days for better close-ups!

Take a look at this in the meantime:

If that all wasn’t enough, after the press event we went to Disneyland to enjoy Season of the Force!

The Rebel shield shines out over the area in Tomorrowland and our first order of business was dinner. A Star Wars themed dinner at the Galactic Grill!

Look at this dessert, Darth by Chocolate. My friend Keri Lyn got a Darth Maul donut. Hilarious! (And seriously good!)

We watched an AWESOME short film called Star Wars: Path of the Jedi that included clips from all of our favorite Star Wars movies about becoming a Jedi. I can’t even tell you how excited it -minute for THE FORCE AWAKES after seeing this on the big screen.

It’s not Disneyland without fireworks!

My friends and I rode Star Tours which has some new stuff in it geared toward THE FORCE AWAKENS! If you get to ride, you’ll see BB-8 in there!

What a seriously magical day. I can’t wait to start sharing more in-depth interviews with you starting tomorrow. Up first: Harrison Ford!