Yesterday I shared with you a photo tour of the STAR WARS: THE FORCE AWAKENS press event. Today, my interviews begin. Stay tuned next week for a new interview every day leading up to the movie’s release. Up first, Harrison Ford who has revived his role as Han Solo.

Interviewing him was really a special experience. He’s such a famous actor and I just LOVE Han Solo. Who doesn’t?! Harrison was soft spoken and insightful. He has a very dry sense of humor and made us laugh several times throughout the interview. At one point the moderator said we were at our last question, and he said he’d like to answer a few more for us. So I think he enjoyed meeting our group of parents and talking with us about his Star Wars experience.

We interviewed some of the ‘new blood’ in this movie, too, and they are really excited and energetic to be a part of something so big. I was left with the impression that this is more of a job for Harrison, and one that he loves. An older, wiser, more reserved Han, yet still just as handsome and engaging.

Enjoy the interview! (Thank you to Louise from Momstart.com for the photos taken during our interview.)

Q: What it was like to come back into the Legacy thirty years later?

Harrison Ford: It was familiar.  Same thing only different.  I was in receipt of a script that I thought was very good.  A sort of road map for the character that I thought was worth coming back to with a Director whose work I admired and who I knew from a previous film twenty five years ago.

It was an all together attractive prospect.  If we were trying to do exactly the same thing, if we were trying to pretend, if I died my hair and pretended that 30 years had not gone by, I would be much less comfortable.  But this acknowledges the reality of the passage of time.  It deals with the question of what happened while I was off stage for 30 years. And it deals with it in a really smart way.

You know, if it were not for the fact that these films have been passed on by parents to their children at an appropriate juncture in their lives and that generations have thus been introduced to me, I probably would have a much different career. So I’m very grateful for the fact that these were family films that been passed on as though there were some nugget of useful information or at least entertainment in them and recognizing their value to the audience gives them significance to me.

Q: Do you have a favorite Star Wars moment from then?

Harrison Ford: No.  I don’t have an anecdotal memory either.  I don’t have much of a memory at all.  I could make something up but I’m – I’m not generally disposed to do that.  I don’t have, you know, I don’t come away from camp saying we all had a great time and we love each other and it’s great although I could.

I mean, it’s great to be back with Mark and Carrie.  I spent a little time with them and Peter Mayou and a lot of the crew.  Some of the older members of the crew have worked on the earlier films.  But more often than that there were sons and daughters of the people who worked on the original film, now are still in the same craft business and were back to work with us. 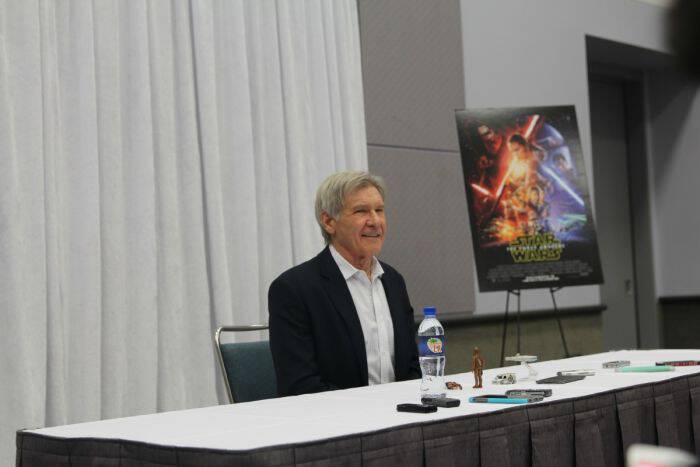 Q: In your opinion, uh, what is most appealing to the Star Wars Fans?

Harrison Ford: The breadth of the imagination that’s involved in these films. The strength and worthiness of the mythology that underpins them, the questions that it generates in our minds about our own responsibilities, our own behaviors. All of that plus whiz and bang and flash and music and good stuff.

Q: When you read the first Star Wars script did you have any concept of the legacy that it would become?

Harrison Ford: No, No.  You’d be locked up if you came to that conclusion.  But in that, in the context of making that first film, I did recognize both the utility of my character to the telling of the story and, and there might be, you know, somewhere in this meshugas, there might be some really strong elements that people would relate to.

I really, what I recognized was that I didn’t know much about science fiction, I didn’t care much about science fiction at that time and probably still don’t although I find it often a very, you know, it gives us the chance to  explore places and things that we haven’t seen before and that’s cool.  But what I recognized was that there is a kind of fairy tale structure in the characters and in the story.

And I’d seen Grimm Fairy Tales that have lasted for the last 400 years, so that was a strength that I recognized and you know, when you have a beautiful Princess and a callow youth and a wise old warrior and then me, it was easy to figure out my place in that structure. 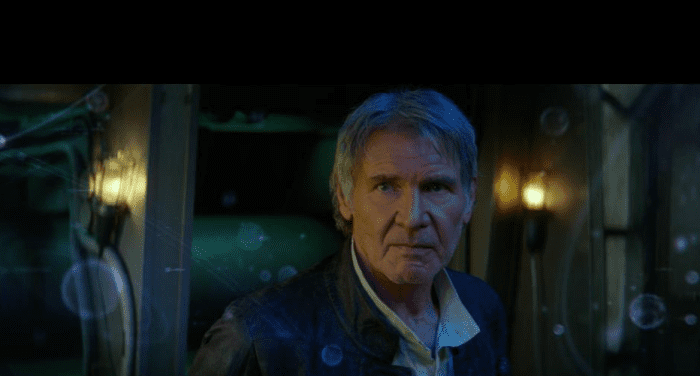 Q: Out of all of the toys that have been made in the last four decades, is there anything that you particularly like or do you collect any of them for yourself?

Harrison Ford: Well I mean, I just don’t get caught up in the toys.  I really don’t care personally.  That’s for other people.  A great deal of  this, you know, this is service occupation.  Story telling is a service occupation much like being a waiter.

You deliver the food.  You don’t bang it on the table in front of them.  You wait til the right moment, you slip it down.  You keep your eyes scanning the crowd, the diners.  And you are there when you see them beginning to look for you.  It’s the same.  It’s a public service job, you know.  And the toys are for them, they’re not for me.  You know, first of all, I wouldn’t get them for free if I wanted them.

So it’s not about me.  I’m not the customer exactly but I love working here.

Q: Was it hard to get back into the mindset after so many years or was it second nature?

Harrison Ford: No, you put on those clothes.  You turn around and see that guy in the Chewbacca suit.  You know, you know what the drill is.  I have walked more than a mile in those shoes and it was a familiar path.  I was happy to be back.

Q: Was there anything in the old  movies or new movie that are your own lines, or was it all scripted?

Harrison Ford: Every word was written in stone.  No, look, it was a collaborative process and collaboration is not one person’s unilateral decision.  It’s a matter of agreement.  If it’s in the movie, J.J. agreed with it when we shot it.  And you know, a lot of the process of film making is problem solving, is saying this is not working, is it?

How can we, are we going to fix this?  And I love that part about it.  There’s a kind of urgency and to try to keep the ball rolling, doing the right thing, because time is limited. A lot of people standing around waiting for you to get it right.  All of those things, that’s a compelling atmosphere in which to work.  I love that.  But I don’t feel a sense of ownership or pride about these things.  So I can’t remember what’s mine or what good idea came from the grip.

Q: What take away do you have or what do you want the new generation to take away from Star Wars?

Q: What was the most challenging part of the process for this movie?

Harrison Ford: There wasn’t any.  Wasn’t any.  I’ve been doing this for a long time and I love doing it.  I had a wonderful Director.  The hardest process is when you and the people you’re working with don’t see eye to eye.  We see eye to eye.  It was a – it was a luxury.

Q: You don’t play with toys but do you have any props that you’ve kept over the years that are yours?

Harrison Ford: I bought my horse, the horse I rode and Daniel Craig’s horse from “Cowboys and Aliens”  I still have mine.

Here’s the larger press conference that includes Harrison Ford’s interview portion. You can get a feel for what I mean when I say he was soft spoken with a dry sense of humor. I really can’t wait to see Han Solo in THE FORCE AWAKENS after chatting with him about his role.