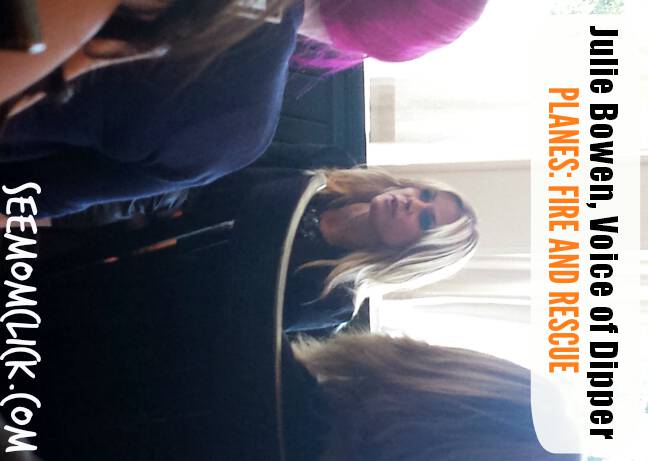 You might know Julie Bowen from her work on Modern Family, but did you know she is also one of the stars of PLANES: FIRE AND RESCUE?  She is the voice of Dipper, the female plane that’s Dusty’s love interest…or not. You’ll have to see the movie to know what I mean!  I got the chance to sit down with a group of bloggers and chat with her about her role in the movie. You guys, this girl is a ball of energy and it’s infectious!  So  much fun to talk to and I can totally see why she was chosen for this part. Julie is a great Dipper!

We asked Julie if she’d ever done voice animation work before and other than a smaller role on Scooby Doo, she really hadn’t.  Her kids (she has twins) loved it though so she was really excited about this role.

She told us that being alone in the recording booth is kind of nerve-wracking. I can understand this. Did you see my attempt to voice her part?  Hello anxiety!  And really, who would have thought that Julie Bowen needed validation? But she was nervous, not being used to voice acting. Bobs Gannaway the Director got in the booth with her now and then and that made her feel more comfortable. Once she got over the initial newness she was good to go. And you can see she rocked her role! See more of Dipper in this trailer below:

So how did Julie find her inner Dipper? Turns out she had a huge role in creating this character when the filmmakers let her do a ton of adlibbing.

“They very quickly figured out that the best way to work with me was just let me go. And then some poor editor had to sit somewhere going, oh my god. I mean I was leaping around, swearing. The original Dipper had quite a mouth on her. But to get to the like sassiness of the way that she thinks, I kind of needed to spout some garbage.” – Julie Bowen

Look at these shoes. This is why she gets paid the big bucks folks. I’d have killed myself within the third step with those on.  Impressive! Despite the fancy footwear she’s a mom through and through. I loved this comment about how thrilled she was to be cast:

“I was just so excited and was like do I get to be a toy? I want to be a toy so badly. There’s so many toys in my house, and one of them will be something when I step on it I will be happy. One trips me in the middle of the night and I won’t want to kill it ‘cause it’s actually… It’s me.” – Julie Bowen

At the end of our interview Julie took a group pic with us and the had to head out the door to a talk show interview. She’s a busy lady but she has an amazing energy about her so busy seems to work!  Some final thoughts on being part of this film:

“You know, I think when I actually get to see the whole movie it’s going to be really exciting. I’m not very good at watching myself, but I’m okay at listening to myself. I’m very excited about this. It also feels so collaborative, it doesn’t feel like I’m raising the ‘I am awesome’ flag, which always makes me cringe a little. I can look at this and go, wow, I was part of something that was so awesome so it’s easy when you’re done to embrace the whole thing.” – Julie Bowen

Follow PLANES on Facebook and Twitter and of course I’ll keep you posted on all the latest, too!  Next Friday I’ll be sharing my movie review with you on the day the film releases so be sure to come back for that!

Julie Bowen is the voice of Dipper in PLANES: FIRE AND RESCUE! Check out my interview with her! http://t.co/mKvi3dyiui #FireAndRescueEvent