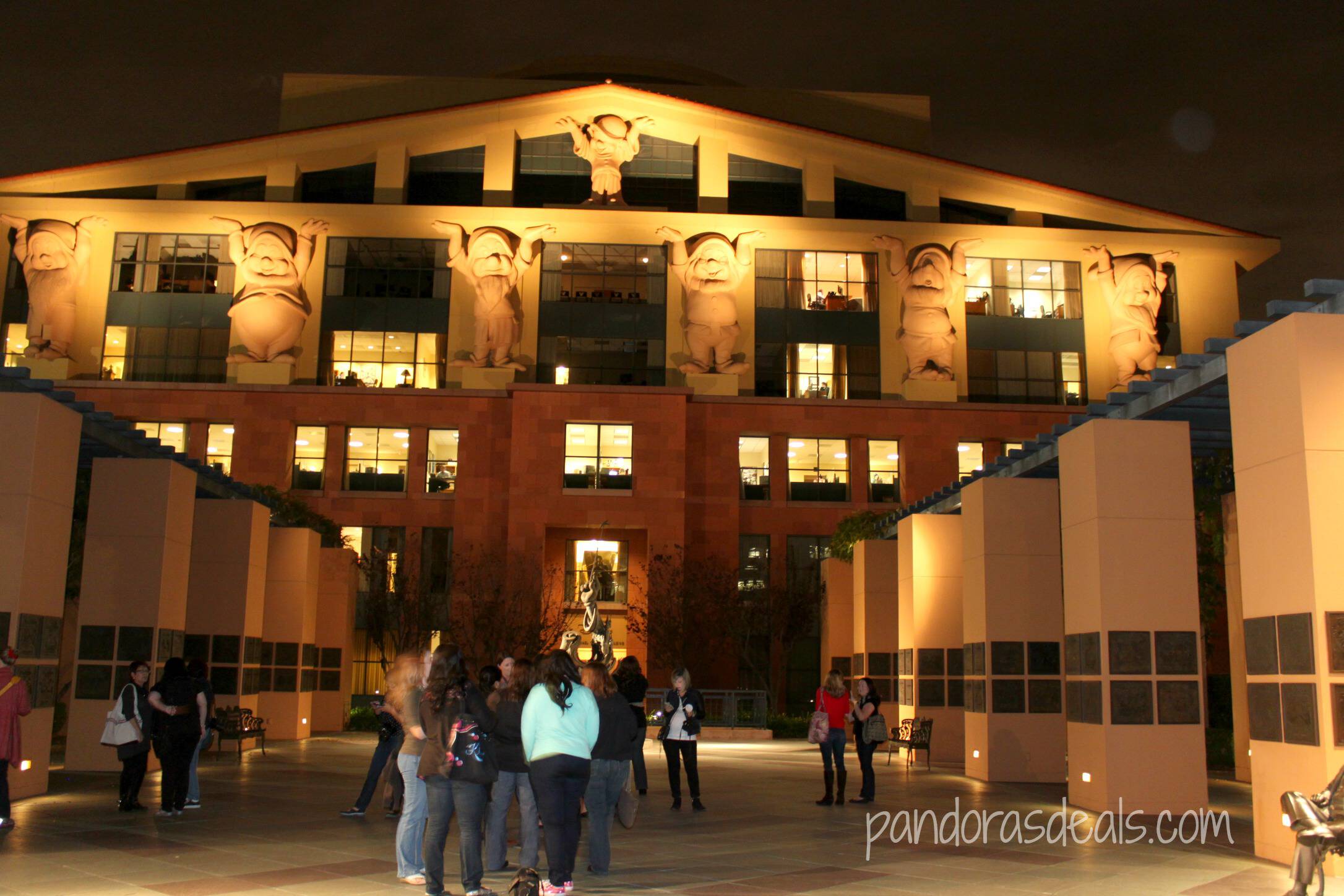 The first night that we arrived in Hollywood for the Disney Frozen Event we went to the Walt Disney Studios Lot in Burbank to screen Saving Mr. Banks (in Walt Disney’s own private theater, no less!).  You guys. The movie is AMAZING.  It comes out in limited release this Friday 12/13 and everywhere on Friday December 20. Go see it!  The Walt Disney Lot is magical at night, isn’t it? 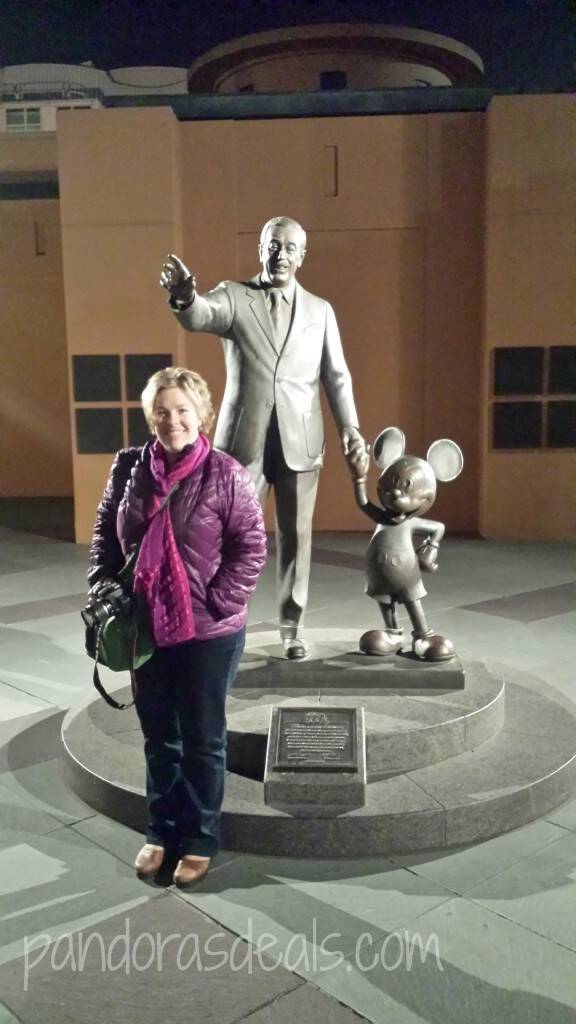 There’s me, the Man, and the Mouse! 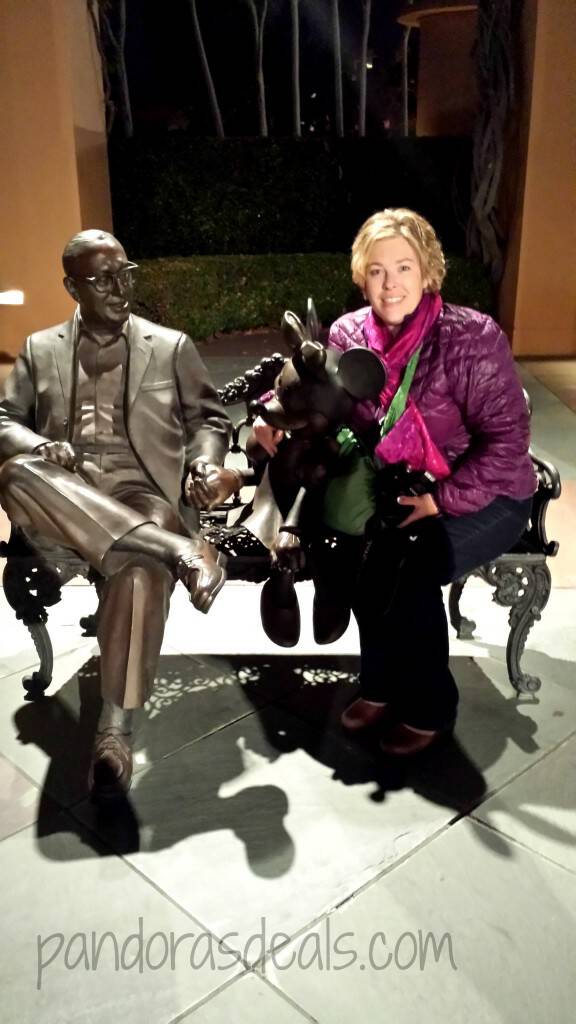 I got a chance to snuggle with Minnie a bit too.  Love her!

The seven dwarfs and Mickey and his wand are just so much cooler at night! I love seeing it lit up in the dark.  What’s really special about this trip to the Walt Disney Studios Lot is that this is where Mary Poppins and Saving Mr. Banks were both filmed!  So a day or so later, after our nighttime movie screening, we came back during the day and got a fantastic tour and learned more about the making of these two movies, plus more awesome Disney movies and shows!

There was no filming on this corner, but I have to share a picture.  I mean, how cool is this?!  I love this street sign. Wouldn’t you love to work in a place like this? Definitely!

Jeffrey Epstein, Manager of Marketing and PR for D23, the Official Disney Fan Club, was gracious enough to give us a very thorough tour of the Lot. One of the most memorable things that he pointed out was Walt Disney’s office!  Fun fact: In his office some of the books were found upside down on the shelves.

Hear our tour guide Jeffrey talk about all the great shows and movies filmed on Stage 1. Mickey Mouse Club, anyone?!

Mary Poppins was filmed almost entirely on Stage 2 and in 2001 the stage was dedicated to Julie Andrews.  The Princess Diaries was also filmed here.  But that’s not all!  Listen to Jeffrey talk about some other movies that they made on Stage 2, and some fun Disney Parks projects that took place here.

I think it’s so amazing what they can make look ‘real’ inside of a building.  Incredible!  Stage 2 is 31,200 square feet large and one of the largest sound stages in Los Angeles.  I guess if any place can hold an asteroid, this would be it.

One of my very favorite make-you-cry scenes from Saving Mr. Banks was filmed right here on the grass.  When you see the movie, look for the scene with Emma Thompson outside getting a little crafty with some leaves and her coffee cup.  It happened on this spot!

In order to visually recreate the Disney Studio lot, Disneyland® Park, and the “Mary Poppins” premiere at Grauman’s Chinese Theatre as they appeared in the early 1960s, the “Saving Mr. Banks” production team examined more than 500 photographs from the Disney Photo Library collection (part of the Walt Disney Archives), including images of Studio building hallways and offices, Disneyland storefront windows and aerial photography.

Here’s our group of bloggers in front of the original Disney Animation building. And check out the video below of the Saving Mr. Banks cast singing “Let’s Go Fly A Kite” from Mary Poppins in the same spot!

Now how cool is that?  So exciting to have been in the same spot where all of this magic happens and will happen for years to come.

I’ll leave you with this one last cool piece of Disney history, the water tower.  Notice that it has 6 legs instead of 4?  Roy Disney decided that was more aesthetically pleasing even though it wasn’t necessary, so he had it built with 6 legs for looks alone. No detail is too small to make better at Disney Studios!

…on Facebook, Twitter – hashtag #SavingMrBanks, and Pinterest.  The Saving Mr. Banks website gives a great synopsis of the film plus more pics and the trailer!  You can get all the latest Mary Poppins news on the Facebook page and check out these fun images from Disney, too!