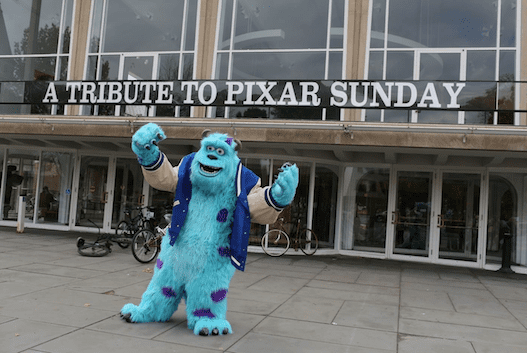 Monsters University will be out on Blu-Ray combo pack on October 29 and everyone is celebrating! There’s no party like a college party and Sulley was there to show off his school spirit at Dartmouth in New Hampshire  where the Dartmouth Film Award and Tribute to Pixar was presented to producer Kori Rae and director Dan Scanlon. 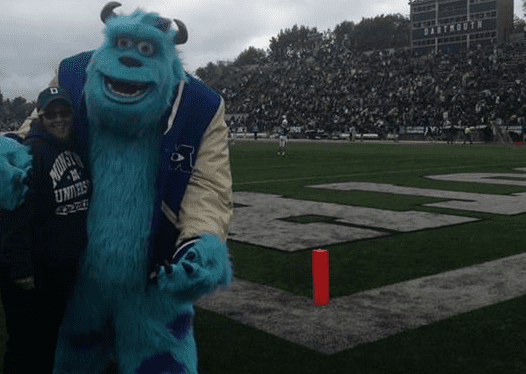 There’s our favorite blue monsters out on the field during the Dartmouth vs. Yale Homecoming Football game. Halftime score had Dartmouth crushing Yale. The Dartmouth Band played a selection of music from MU as Kori and Sulley paraded across the field to salute fans at the 50 yard line. The student body and spectators went wild. Lots of pictures were taken and Sulley lingered to shake hands with a lot of the Big Green. Final score was Dartmouth 20, Yale 13.  Woohoo! 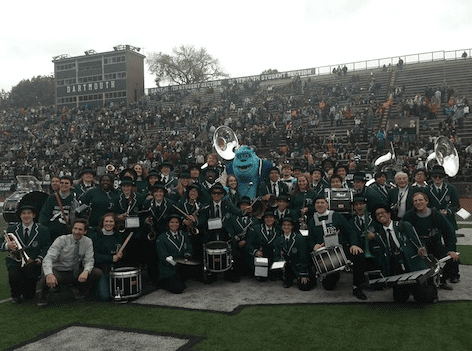 Sunday evening was the highlight with the Dartmouth Film Award and Tribute to Pixar presented by The Hopkins Center for the Arts at Dartmouth College. The night began with a moving Pixar tribute reel followed by Sulley escorting Director Dan Scanlon and Kori to the stage for a moderated Q&A and showcase of bonus features “Monthropology,” “Scare Games,” and “Paths to Pixar.”

Monsters University is such an awesome movie.  You can read what my family thought when we saw it in theaters.  We also have an advanced copy of the Blu-Ray and I’m going to be sharing my review with you soon.  Suffice it to say we’ve watched it several times already and I think I’ve enjoyed all the awesome behind-the-scenes bonus features as much as the film itself!   You can pre-order Monsters University from Amazon and get it the day it comes out, October 29!

Monsters University is out on Blu-Ray October 29!