MALEFICENT coverage continues! I had such an amazing time meeting the cast of the movie including Angelina Jolie, Elle Fanning, and Sharlto Copley.  It was such a pleasure to also meet the man behind the scenes that made it all come together, Director Robert Stromberg.  He is best known for his Academy-Award winning art direction work on AVATAR and and ALICE IN WONDERLAND.  He’s always wanted to direct, though, and I’m so glad that he was chosen for MALEFICENT.  A warm, friendly, down-to-earth guy, Robert was interesting to chat with and gave us so much insight into the film.

On becoming a Director…

As I mentioned this is Robert’s directorial debut so we were interested in how this was different for him and where he picked up the skills required to direct. You’ll see when you watch the movie – he’s got skills!  I really loved hearing about which other notable directors had influenced him.

I got sidetracked by this pesky art direction stuff.  And no, no, it was part of the journey.  I’m glad that I did all that stuff because it prepared me not only being around these big movies but also meeting a lot of great directors.  I met Peter Weir and we became close friends on a movie called Master and Commander.  He taught me a lot about how to talk to actors and to get at an emotional level with them.

And then I spent four years with Jim Cameron and that was useful in, you know, in how to be strong when you need to be.  Many, many situations, artistic, I worked with Tim Burton and how an artist can direct.  These are all directors but they do it in different ways.  So I came into this with a lot of experience and not only that, you have to have emotion yourself.

And you have to have spent your life studying human behavior and really, really paying attention to why people react a certain way when they’re told something.  I think it’s all those little bits of information plus all of the knowledge I got from just my experience with other directors.  And then the confidence to be at the same level with somebody in finding the emotion of that character.  That’s what made me feel comfortable in being a director. – Robert Stromberg 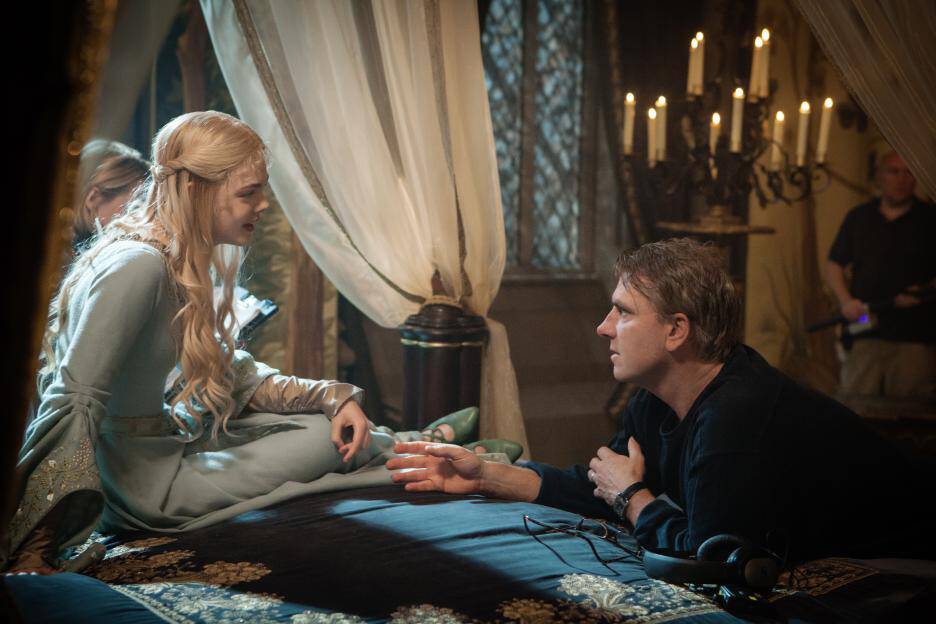 See a bit of Robert in action in the clip below:

“On The Battlefield” Featurette – Maleficent

On the evolution of his passion...

These pieces of the interview are what made me fall in love with Robert Stromberg. He is clearly passionate about his work and it shines through in his films, particularly MALEFICENT.  But when he started talking about his family that’s when he shared his true passion and it was, as a mom, something I could relate to on a more personal level.

When the interview ended and we were all saying goodbye and thanking him for his time, Robert spend a few more minutes chatting with us more as moms than as journalists, and told us that he really made this film for his daughter who is 9 years-old. He said he really didn’t know what love was until her and MALEFICENT is a tribute to her and his grandmother who raised him.  This ‘tribute’ part might not make sense to you until you see the film, but read on to know what Robert believes the true message of the movie to be and you’ll have a better idea. I was so touched by him sharing this with us and as a mom I could totally relate to what he said.

On his favorite scene to direct…

Robert said that he had once heard directing described as “painting in a hurricane” and thinks there’s truth to that analogy. “You’re just constantly juggling chainsaws and trying to draw pretty pictures at the same time.  So I think the challenge is to bring all these huge elements together and at the end of all that, have something with a heart and soul and emotion and something that means something. ”  Despite the juggling act that is directing, he was able to come up with one scene that he really enjoyed working on the most.

“I suppose the christening scene because in the film we’re doing a retelling.  So we’re not just doing a straight out of the box remake of that classic version.  So it was very intentional that when you watch the movie you’ve learned a whole bunch of new material.  When you get to that center point of the movie we shot that scene almost verbatim, word for word, from the classic cartoon version.

And that was so that you now had all this new, fun information that you had learned and you understand why that character is doing what she’s doing.  And then you get to see what happens after that.  So I think, it wasn’t challenging but for me personally as a film, Hollywood moment, just standing there, with several hundred extras in this huge set, and she came into the room in that costume and I just, I was a big fan myself at that moment, just in awe.” – Robert Stromberg

Take a look at just a little piece of the scene he’s referring to below. I can just imagine what it was like on set!

I love this scene! Can’t wait for you to see the entire film so you can see what happens next.

On working with Angelina Jolie…

Robert had never worked with Angelina before and she was already attached to the film when he was chosen to be the Director.  So he went over to her house to meet her and shared this with us about that day.

“I went to her house the first day I met her and what was really great is, we didn’t talk about the movie for the first hour, I think.  I’ll never forget we just sat on some back steps in her backyard and watched her kids play out in the backyard.  And we talked about life and, and being a parent and just normal stuff. And I think that’s why we connected is because we had to find out that we were both human beings first before we tackled human being problems.  And that, that was a special moment for me because I wasn’t necessarily intimidated by her, but I had never seen the human, motherly quality in there before.” – Robert Stromberg

On the true message of the film…

MALEFICENT is an awesome film. I absolutely loved it for many reasons,  and the plot was totally unexpected as was the message of the movie.  Here’s what Robert had to say about what he hopes we’ll all take away from the film.

“If you were to look at this, boil down this film in one sentence I would have to say it’s human beings trying to find the essence of true love and what that means and whatever that is.  Maybe it’s not the puppy love thing that you think it is.  Maybe we should look to our parents and maybe there’s a deeper love that we’re not seeing.  And hopefully there’s a message in this movie is that it can open up some young one’s eyes to see a love in their parents that they didn’t see before.  That’s kind of the message.  And it’s really based on looking at my own daughter and feeling that feeling that I want, I hope that people will feel.” – Robert Stromberg

I love this, love this message and I really love that the inspiration came from his daughter.