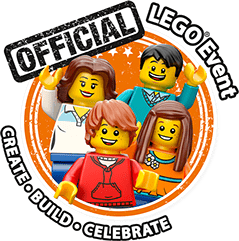 A few years ago we took the kids to Pittsburgh for the LEGO® KidsFest event and had SO much fun! This year for there is a stop in Harrisburg, PA, very close to home for us, on the 2016 tour and we went last night courtesy of US Family Guide. Unfortunately these events sell out so fast and there are no tickets available for any sessions in Harrisburg, BUT, please take a look at the other stops on the 2016 tour and if there is a city near you, get your tickets now! It’s SO much fun! 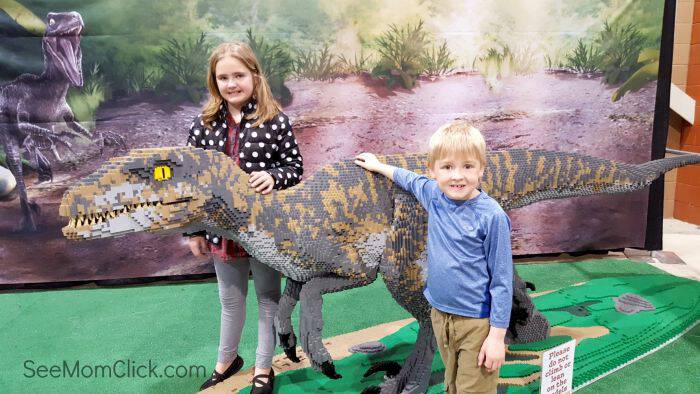 Among the many LEGO attractions, families will find:

* LEGO Model Museum: life-sized models made entirely from LEGO bricks
* LEGO Master Builders: live demonstrations and activities from the crew who get paid to play
* Race Ramps: build a custom car, then race it down the ramp against friends and family
* LEGO Star Wars: build and display a Star Wars model
* LEGO Disney Princess: create a princess scene to add to a LEGO story book
* LEGO Super Heroes: pose with a life-sized Spiderman model and more
* LEGO DUPLO: younger visitors can explore imagination through building
* LEGO Retail: purchase LEGO merchandise and official KidsFest tour goods
* LEGO Friends: build for the five empowered friends from Heartlake City
* LEGO Ninjago: spin the way to being a Spinjitzu member
* LEGO Mindstorms: build and program robots and snakes
* LEGO Technic: get hands-on with the cool, realistic vehicles at the booth
* Creation Nation: build your own creation to add to a custom map of the U.S.
* Brick Pile: a gigantic pile full of LEGO bricks for creative play and enjoyment
* Monochromatic Builds: bricks of a single color foster group creativity

“Our 2016 LEGO KidsFest tour is going to delight both new and returning audiences,” said Vince Rubino, Events Manager for LEGO Systems, Inc. “We’ve still got some favorites on the show floor, like the Big Brick Pile, Creation Nation and the Race Ramps. There are also many new and unique activities designed for building, learning and fun.”

Take a look at a few of our favorite parts of the 2016 show! 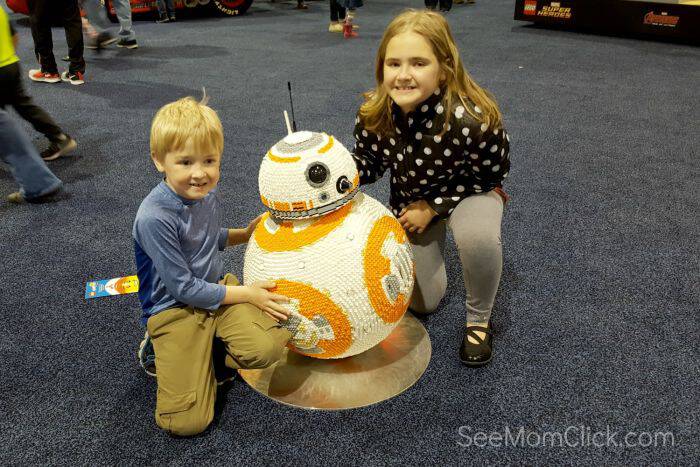 Star Wars fans will be happy! Many of the characters from The Force Awakens were represented in LEGOS!

Can you imagine how long it takes to build one of these? So cool to look at the detail on BB8!

Poe Dameron has a couple of new allies in his fight against the First Order.

My son was fascinated by how they used LEGOS to build round wheels on Lightning McQueen. Some great photo opps here for the kids with their favorite characters.

Many of the exhibits are interactive which the kids LOVE. We spent a lot of time building cars and racing them down the tracks they had set up.

The giant Brick Pile is a huge hit with kids. They just sit right in the middle of it (sitting on LEGOS, ouch!) and love it!

Another interactive exhibit is this LEGO Knights shield display. The kids can design their own shields and place them on a display.

Be sure to stop by the Santoki exhibit to check out their new LEGO stationery items. Isn’t that ruler cool, and you can snap your LEGO marker right onto it!

Finally, there’s an awesome LEGO store with unique sets available for purchase. This guy was happy to spend his birthday money on a Christmas set (don’t ask!). haha! Well it *is* snowing today, so…

Get more info on the rest of the 2016 LEGO KidsFest tour dates and locations here, and grab your tickets early. These events really do sell out in advance and it’s SO much fun. Don’t miss it!