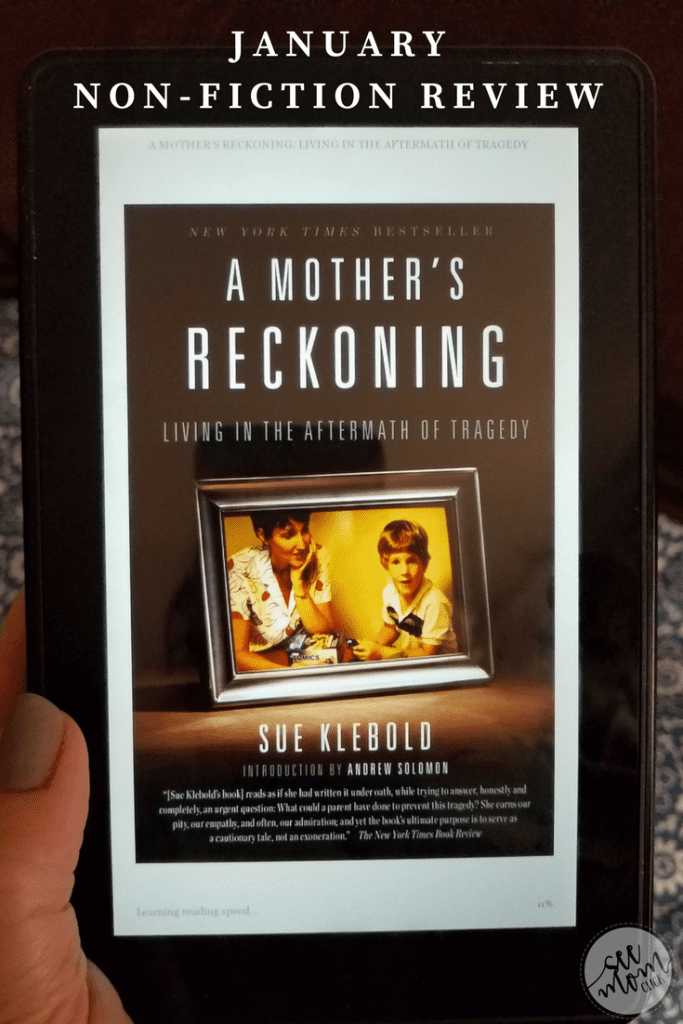 I’m terrible at keeping New Year’s Resolutions, so I didn’t really set any this year. But you probably know I love to read, and I kind of ebb and flow with my book consumption. I have periods where I’m devouring book after book, and dry spells where I don’t make time to read for weeks or months at a time. Without really calling it a ‘resolution’, I set a goal to read more in 2018. My target is two books per month: one fiction and one non-fiction. 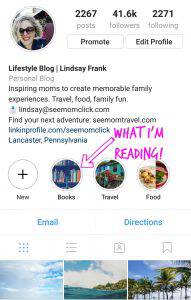 I’m posting the books I’m reading on Instagram in my stories, so be sure to check the Books highlights to see what I currently have my nose buried in. I’d love to have you join me so I have a book buddy to chat with!

A Mother’s Reckoning: Living in the Aftermath of Tragedy

I kicked off my year of reading with a real doozy: A Mother’s Reckoning: Living in the Aftermath of Tragedy. This book was written by Sue Klebold, mother of Dylan Klebold, one of the Columbine High School shooters. The book came out about a year ago, February 2017, and I remember seeing Sue on some new shows talking about her book, and for the first time, lifting the veil on how this tragedy could occur. I was in college at Penn State when this school shooting happened, and the image of those kids running from the school, hands in the air, is still vivid in my mind. I finally picked up the book, and am so glad I made time to read this. My review is below.

From Amazon, here is the synopsis:

On April 20, 1999, Eric Harris and Dylan Klebold walked into Columbine High School in Littleton, Colorado. Over the course of minutes, they would kill twelve students and a teacher and wound twenty-four others before taking their own lives.

For the last sixteen years, Sue Klebold, Dylan’s mother, has lived with the indescribable grief and shame of that day. How could her child, the promising young man she had loved and raised, be responsible for such horror? And how, as his mother, had she not known something was wrong? Were there subtle signs she had missed? What, if anything, could she have done differently?

These are questions that Klebold has grappled with every day since the Columbine tragedy. In A Mother’s Reckoning, she chronicles with unflinching honesty her journey as a mother trying to come to terms with the incomprehensible. In the hope that the insights and understanding she has gained may help other families recognize when a child is in distress, she tells her story in full, drawing upon her personal journals, the videos and writings that Dylan left behind, and on countless interviews with mental health experts.

Filled with hard-won wisdom and compassion, A Mother’s Reckoning is a powerful and haunting book that sheds light on one of the most pressing issues of our time. And with fresh wounds from the Newtown and Charleston shootings, never has the need for understanding been more urgent.

All author profits from the book will be donated to research and to charitable organizations focusing on mental health issues. 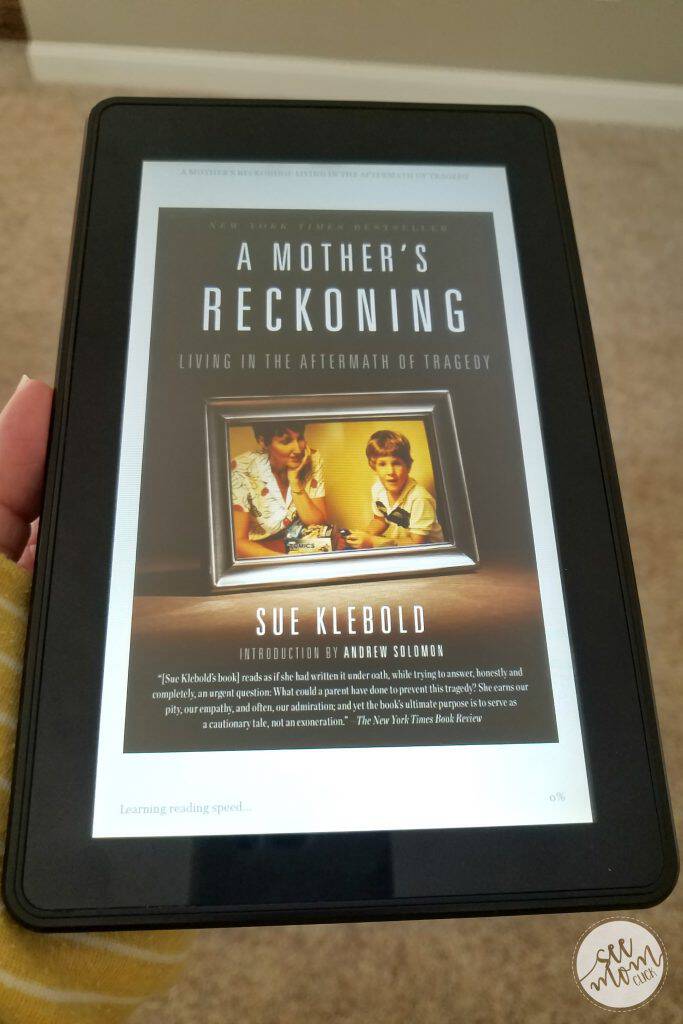 A Mother’s Reckoning gripped me pretty early on in the book. It’s very well written, and I believe that Sue Klebold has given the most honest look she can at what happened, what might have been done to prevent it, what she missed, and the horror she now has to live with. She doesn’t make excuses for her son’s actions, but does offer some insight into his state of mind during the period leading up to the shooting. Dylan Klebold was severely depressed, and coupled with the sociopathy of his friend Eric Harris, the two made a deadly duo.

As a parent, I walked away from the book with a few really important lessons. I saw a lot of my own parenting in Sue Klebold: signing permission forms, packing lunches, reading bedtime stories. By her account, she raised her family in a loving home that I think many of us would recognize as similar to our own.

I’d been an “everybody sits down for family dinner” kind of a parent, an “I want to meet your friends and their parents before you spend the night at their house” kind of parent. What good had it done? – Sue Klebold, A Mother’s Reckoning: Living in the Aftermath of Tragedy

The takeaway for me is that loving your children, providing a safe and loving home, it is not enough. You can’t LOVE your child out of a crisis, especially when they won’t tell you they are in crisis.

There is perhaps no harder truth for a parent to bear, but it is one that no parent on earth knows better than I do, and it is this: love is not enough. – Sue Klebold, A Mother’s Reckoning: Living in the Aftermath of Tragedy

The biggest takeaway for me: You would be astounded to know what your kids can hide from you. Think about the things you hid from your parents, and we all grew up in a simpler time. Columbine itself happened before Facebook and Instagram were on the scene. Children today are dealing with so many more social pressures and their brains are not equipped to handle it. (This is why I won’t allow my children social media accounts, but I think that’s another post.)

Anyone can be suffering and in need of expert care, regardless of how they act, what they say, or who they are. Those who are suffering can appear for all the world to be doing well, their private pain masked by accomplishments and triumphs. – Sue Klebold, A Mother’s Reckoning: Living in the Aftermath of Tragedy

Sue Klebold talked about Dylan isolating, being moody and distant, but then he’d turn around and give just enough normalcy for her to brush it off. It’s a phase, he’s a teenager. She didn’t know there was something much darker going on, and that Dylan was really suffering and wanting to end his own life. She said if she knew then what she knows now, she would dig, dig, dig. As parents, we have to push ourselves into our kids’ lives. If we are worried that the typical teenage moodiness might be crossing a line into a more serious sadness, get them some help.

I wish I had listened more instead of lecturing; I wish I had sat in silence with him instead of filling the void with my own words and thoughts. I wish I had acknowledged his feelings instead of trying to talk him out of them, and that I’d never accepted his excuses to avoid conversation – I’m tired, I have homework to do – when something felt off. I wish I’d sat in the dark with him, and repeating my concerns when he dismissed them I wish I’d dropped everything else to focus on him, probed and prodded more, and that I had been present enough to see what I did not. – Sue Klebold, A Mother’s Reckoning: Living in the Aftermath of Tragedy

I’m telling every parent I know that they have to read A Mother’s Reckoning. It was eye-opening to me in a lot of ways, not only to have a better understanding of what happened in Columbine, but I learned some lessons about the importance of having your finger on the pulse of your children’s brain health, even when they are trying to lock you out of their personal lives. Especially if you have tweens or teens, I urge you to read this book.

I read on my Kindle but you can grab A Mother’s Reckoning in paperback, too. It’s currently actually cheaper to do that! Of course you’ll be able to find this title in bookstores as well.

I’ll update this throughout the year!