Hershey Entertainment & Resorts has provided me with an expense paid trip to Hershey, PA to explore all their amazing town has to offer in exchange for my review of the events of the trip.  No other compensation is given. The opinions and experiences in my posts are 100% mine.  You can read my full disclosure policy here. 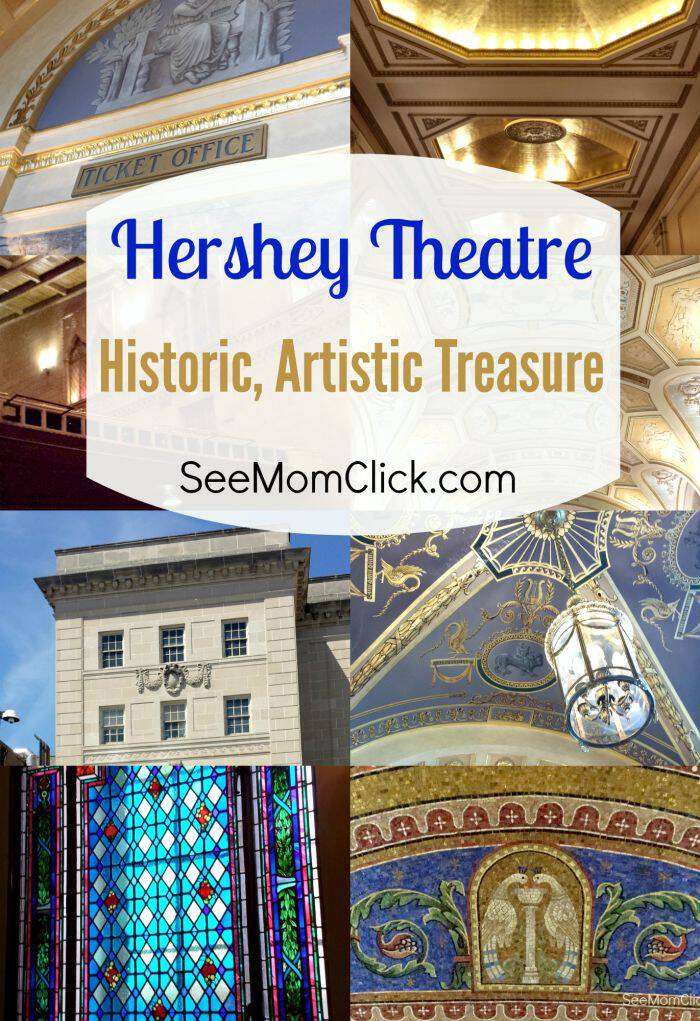 My tour of Hershey, PA continues with the gorgeous Hershey Theatre. This is such a gem in this town with its rich history and stunning artistic design. I’ve been there once before when we took the kids to see Sesame Street Live and we were wowed by the theater. This was a new way for me to see it with no one there, so take a look at some of these details and look for them when you catch your next show there. 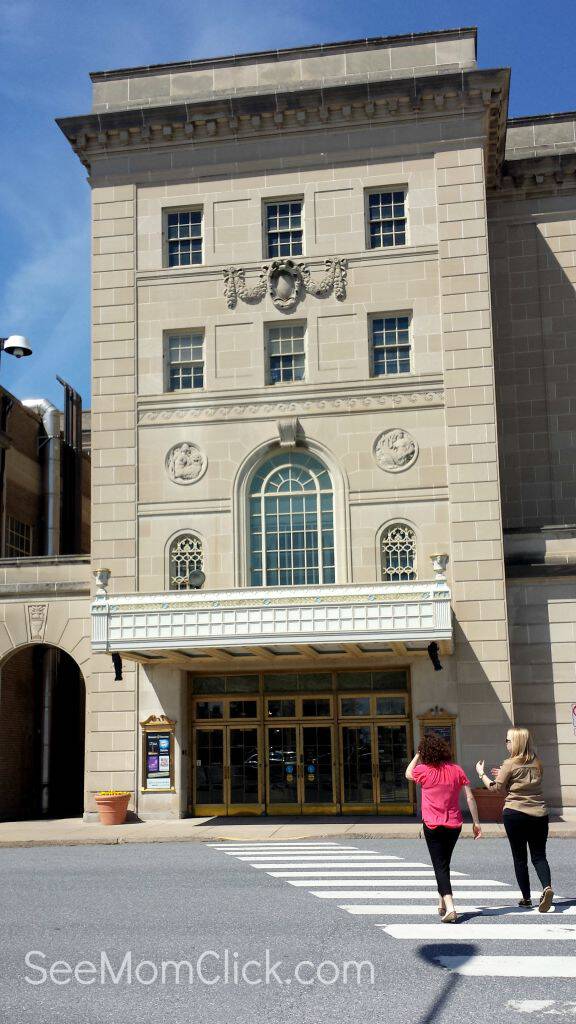 Worth noting if you might be attending a show with kids, or an evening show, is that parking is conveniently located right across the street (side street, not a busy street) from the theater. And it’s free! So this is really easy to get to and get right in the door to your seats. Sometimes you have to allow yourself time to find parking and get inside. Not really the case here which  makes this a perfect theatre for families. 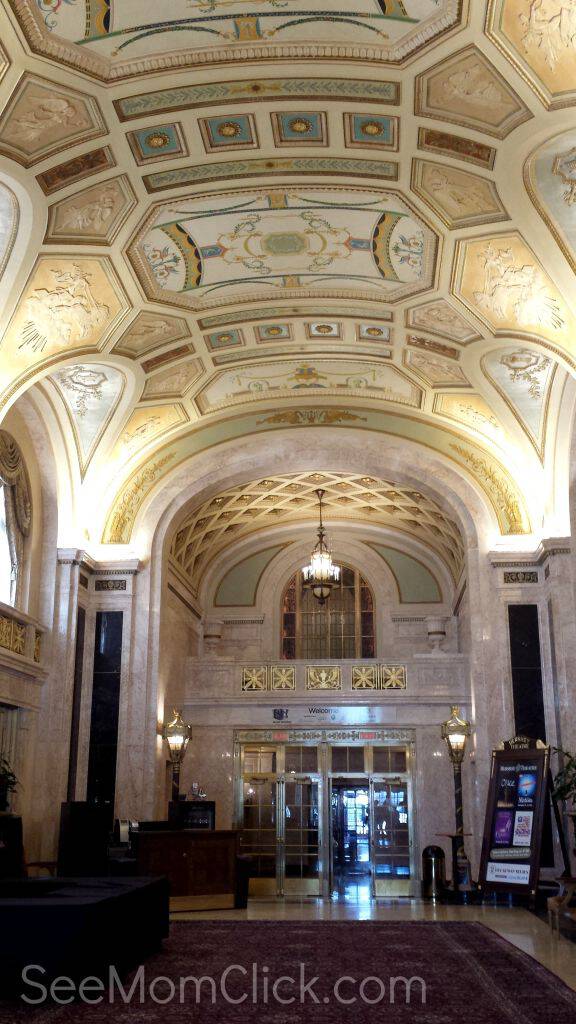 This is a view of the lobby door from inside. WOW, right? The show starts the second you walk in the door.  The Hershey Theatre was built starting in 1929 and opened in 1933.  Milton Hershey saw bread lines all around the country during the Depression and decided that was not going to happen in his beloved town, so he grew it and created more jobs. He’s such an amazing person and this theatre speaks to his legacy.

The ceiling is entrancing. I got a stiff neck staring at it! So much detail. It’s really an amazing work of art with marble and gold foiling everywhere.

These marble columns in the lobby are really stunning. There are actually 5 different kinds of marble in the lobby and the floor is made of lava. Lava! Take a look at that Greek figure on the ceiling. It’s believed that the lobby of the Hershey Theatre was designed to resemble a temple to honor Apollo. There are signs all over the ceiling that represent this important Greek god.

You can see some of that rose marble in this section of the theater which is near the back entrance. I love this purple ‘room’ in the theater. It’s sort of a little lobby area but just feels really special.

At one point this ceiling was painted white and when they removed that paint and got down to the original surface they found this gorgeous gold leaf ceiling. I can’t believe it would have ever been painted. The gold is so flashy and gives that fancy theater feel.

This is a fountain that was found in the ladies’ room. When this theater was in its early years they even had smoking rooms on the second floor. Going to the theater was a real event. You didn’t just come to see the show and then leave. You made a night of it and there were places created just for socializing.

Take a look at the beautiful stained glass windows. These are found in the staircases and the glass was done by Rudy Art Glass. They found that out when they had Tiffany come in to see if the glass was theirs. Nope!

Do you see the little lions on the ledge (look between the windows)? There are 25 of them in the Hershey Theatre. Keep this in mind when you take the kids. Fun little I Spy game to keep them busy until the show starts!

The screen that covers the stage before the shows start is a gorgeous European scene. Speaking of Europe…did you know that Mr. and Mrs. Hershey had tickets to be on the Titanic? It is believed that Mrs. Hershey was ill, she had fought illness all her life, and that’s why they didn’t board. My chocolate-loving heart is so selfishly thankful for that!

Look for this incredible mosaic on the ceiling of the lobby on the first floor of the theater. It took two years to install!

From the back of the theater, this is the view. You can see with the gradient of the floor there’s really not a bad seat in the house. Milton Hershey had a seat right next to the exit door you see on the left so during intermission he could easily slip out for a smoke.

I love the ‘flow’ of the design of this theater and this is the best shot I could get of the ceiling so it didn’t look like one white sheet. I was amazed to find out that the ceiling isn’t attached to the walls! It’s plaster and hangs from cables. It’s also an atmospheric ceiling so it can be made to look like a cloudy night and even has holes in it for light to shine through and create stars!

We got a peek backstage too which is amazing. I can’t believe the shows they put on in this space. It’s real choreography to get everyone and every piece of the set where it needs to be when it needs to be there. One the far left of this picture is back side of the screen, a fire screen. They figure if a fire is going to happen in the theatre it will most likely happen on stage and by lowering that screen they can contain it. I never knew that! Did you?

This is one of the dressing rooms on the side of the backstage. You thought they might be fancier? Me too. But the actors don’t spend any time in here really, rushing in and out to get back on that stage!

And this is what the stage might look like during a real show. This is the Sesame Street show we saw a few years ago. I can’t wait to get back and check out their new line up.

Here are the upcoming shows for the next year. Cinderella looks awesome for families!  Get all of your Hershey Theatre info including show times and tickets on their website. Follow along on Facebook and Twitter to keep up with the latest news! They always have something new coming up so check back frequently.

Want more of Hershey, PA? Check back often. I’ll be adding to this list of posts: