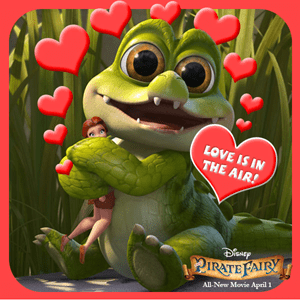 Disney’s The Pirate Fairy comes out on DVD on April 1. We are SO excited!! My kids love the Disney Fairies and this movie looks so cute. Just in time for Valentine’s Day, see how love bloomed between Crocky and his friend Rosetta!

Baby Croc: This clip features the introduction of Crocky and his friend Rosetta as they embark on their journey in Disney’s The Pirate Fairy.

Disney's #ThePirateFairy is out on Blu-Ray April 1. Happy #ValentinesDay from Rosetta and Crocky! http://t.co/ENaMg8aUU2 #PirateFairy