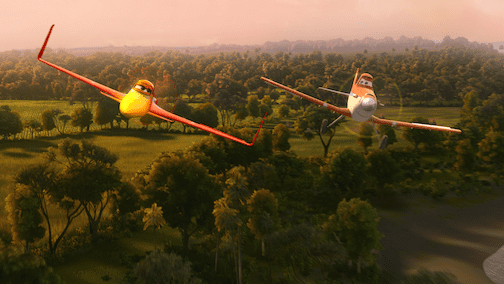 Disney Planes comes out on Blu-Ray combo pack on November 19! This movie is near and dear to me after my trip to Los Angeles for the #DisneyPlanesEvent. I got so many behind-the-scenes looks at the making of the film.

Fly behind the scenes with Q&A interviews with Priyanka Chopra (voice of Ishani), Roger Craig Smith (voice of Ripslinger) and Director Klay Hall along with two new bonus clips!

Where in the world did you record your voice for the movie?

I did the first recording session in Bombay with [Planes director] Klay Hall on Skype. That was my first rehearsal – but then I went into Disney and recorded everything else. It was pretty quick, but it was super fun. By the time I came into Disney, I knew exactly what I wanted to do with the character. Klay said to me, “Just be you. Just use  your voice.” Klay let me improvise in the sound booth and it was a lot of fun.

How does it feel to hear your voice coming out of an animated aircraft?

Initially, I was a little freaked out. I couldn’t believe it was my voice coming out of a cartoon and it threw me off for about five minutes – but then I got over it. After that, I was fine. I love it.

Planes director Klay Hall mentioned that you had a lot of input into the look of your character. What were your suggestions?

I wanted Ishani to have big, blinky eyes because I have big eyes in real life. Klay loved the idea, so now Ishani has big eyes that make her really stand out.

How would you describe your character in Disney’s Planes?

Ripslinger is a three-time Wings Around the World Rally champion, but he’s out to set a record by winning it a fourth time. He’s the best of the best. He’s the Formula One to Dusty Crophopper’s go-kart. He is a passionate racer and he’s a diehard competitor – but he’s a bit of a bad guy, too.

How does it feel to play the bad guy?

It feels awesome! If you look at Star Wars, Darth Vader is the coolest character around. He’s an amazing bad guy. The stormtroopers are also really cool, and they are baddies, too. It’s a blast to play a bad character. It’s one thing to be involved in a Disney project, but to be involved in a Disney feature film as the main villain is a dream come true – especially when it’s a movie about airplanes. I was a huge plane buff as a kid, so it’s an absolute dream come true to be involved with this project.

How much of a plane buff are you today?

I still love airplanes, and I love flying. To this day, I always pick the window seat whenever I fly because I love to stare outside and see what’s going on. I marvel at how flying works and what we’ve been able to do as a species. The fact that we’ve taken to the skies when we’re not supposed to is incredible to me.

How did you prepare for a mammoth project like Disney’s Planes?

How did we prepare? We did lots and lots of research. When you work with John Lasseter, he has this mantra that he lives by; that it’s all about research. You have to get out there and meet as many people as you can. You have to talk the talk and walk the walk. You have to go to the locations and do as much as you possibly can because that gives you information that you’re then able to put into your movie.

Why is the research process so important?

The research adds a level of truth and believability to a movie. The audience might not always understand exactly what’s being said. They might not know about that specific piece of machinery, but they know it feels right and it feels real. That’s why we did a lot of research for Planes, for months and months. This movie took four and a half years to make. That work involved 550-600 people and two million frames of film. We probably spent at least one year researching everything.

Where did your research take you?

I actually got to meet Klay Hall and he’s such a nice guy and I just loved hearing about how Planes came to life.  Check out my interview with him, too!

Family Flying: In this touching clip Director Klay Hall shares his passion for flying vintage planes with his own two sons.

Taj Mahal: Deleted Scene of Dusty and Ishani flying over the Taj Mahal before it was updated to look like the final version included in the film.

My family loved seeing Disney Planes in the theater and we’ll definitely be adding this one to our home movie collection! You can order Disney Planes on Amazon and get it for your family, too!