I was provided with a 2015 Mazda MX-5 Miata to test drive to facilitate this review. The opinions in this post are 100% mine.  You can read my full disclosure policy here. 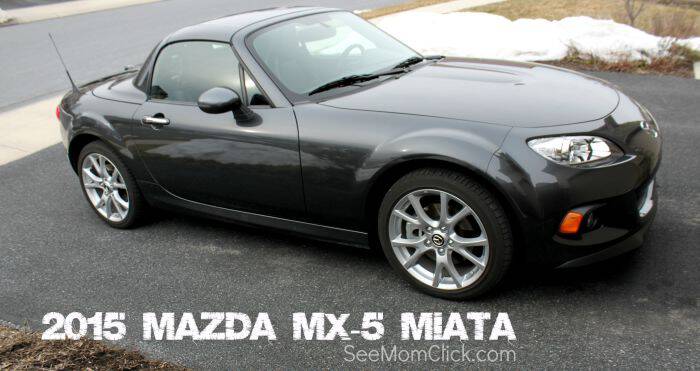 As the snow was starting to melt a few weeks ago we celebrated warmer weather around the bend by test driving the 2015 Mazda MX-5 Miata for a week. I mean, there is no better car for warm weather than a convertible, and no better convertible than a Miata. I remember oogling them when I was just starting to drive myself 20 years ago. They’re even cooler now with more features and more zoom. If you’re looking for a family car, keep looking. But if you’re looking for a FUN car, this is the one. 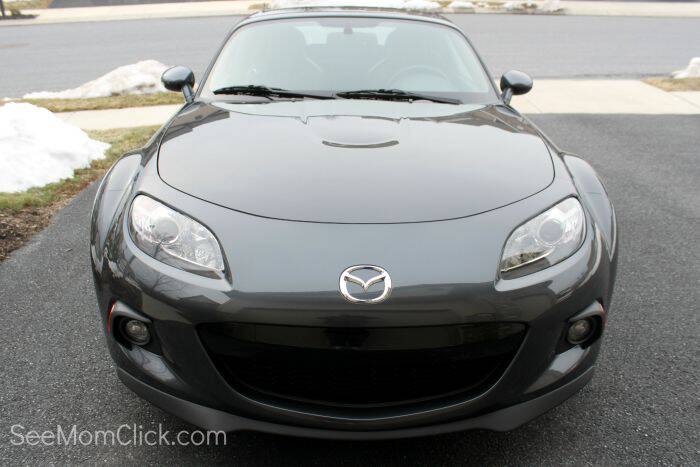 As a two seat convertible, the Miata is in a distinct class of car.  It’s clearly a car for those who enjoy driving. We couldn’t get enough of the driving experience and even though my husband and I always feel like we’re running somewhere and get sick of it, we were actually looking for reasons to hit the road with this car.   The energy and excitement of driving it is addictive! You’re no longer the regular working guy schlepping it to the office. You’re James Bond. You’re no longer Mom running to the grocery store. You’re a cool chick in a sporty car. It’s SO much fun! 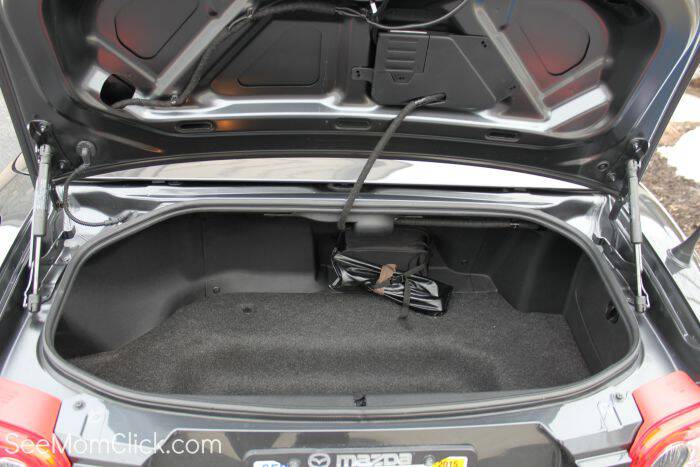 The trunk is surprisingly spacious. You’re not going to fit a lot in this car – it’s just not meant for cargo, but I was easily able to get a load of groceries in this trunk. I don’t know about you but I almost always have something with me when I leave the house so I need a spot to put it so I definitely appreciate this storage area.

The interior of the car is really stylish! Don’t you love the black and tan leather? So sporty.  There’s not much space inside for your stuff so plan to travel light. There is no backseat, just the two up front and really no place to tuck anything behind the seats either. There’s a small compartment between the seats that you might be able to tuck something small into (your purse) but that’s it. And I promise you won’t care! The Miata is about having fun on the road, not about hauling your kids to soccer (though I totally did that too!).

There are controls on the steering wheel for the radio and cruise control. This model had heated seats and I’m slightly embarrassed to say that I used them…with the top down. C’mon! You’d have done the same thing!

This car is a 6-speed manual transmission and the gears are really close together. I only mention that because it took me a couple of minutes to get used to that. I actually stalled it backing out of my driveway. Ack! But after a drive around the block I was good to go. What I mean when I say the gears are tight is that I found myself shifting more frequently into a higher gear. Shifting is part of the fun of driving this sporty car so that’s not a negative, just an observation to share. The gears shifted smoothly and easily.

Now the fun part: taking the top down! This is so simple that it’s unbelivable. It’s completely automatic to put the top up and down but the car does need to be stopped to have it work. There’s a latch to unhook right near the rear view mirror, and then you hold that Top Down button (see the pic above) in until it beeps, maybe 10 seconds, and that’s it! The top is down, baby! To put it back up, same thing – just hold that Top Up button in until it beeps that it’s done. Easy, easy, easy!

I couldn’t get my kids out of the Miata while I was taking pictures. It’s really not a car for kids or families. There’s no backseat, no safe place for car seats. I’m sure you already know this just by looking at it. This is a FUN car, made for fun, made to make you feel young and excited about being on the road. I completely loved driving it and got to take a girlfriend out for coffee in it and she was tickled pink. We got a few eyes on us that day at Starbucks!  😉

The Miata is popular among amateur racers and enthusiasts for good reason.  (It’s also now popular with this Mom and her little girl!) The most striking feature of the car is its balance and handling.  Twisty, hilly roads are an absolute blast as the Miata is completely in control.  The light weight and 6-speed transmission make the car feel very responsive whether you’re zooming faster or slowing it down. The engine produces 167 horsepower, and it actually feels like a lot more because of the overall package.

This was the night I won the Cool Mom Award for taking my daughter to soccer practice in the Miata. You want to turn other parents’ heads? Pull up in one of these babies. My girl thought it was pretty cool to ride around with the top down while there was still snow on the ground too. 😉

The Mazda MX-5 Miata starts at $23,970 and has won tons of awards. I can totally see why. This was absolutely hands-down the most fun car my husband and I had ever driven. If you’re ready to zoom zoom, go test drive a Miata.  It will turn you into an enthusiast even if you’re not really a car fanatic. Trust me, I’m proof!