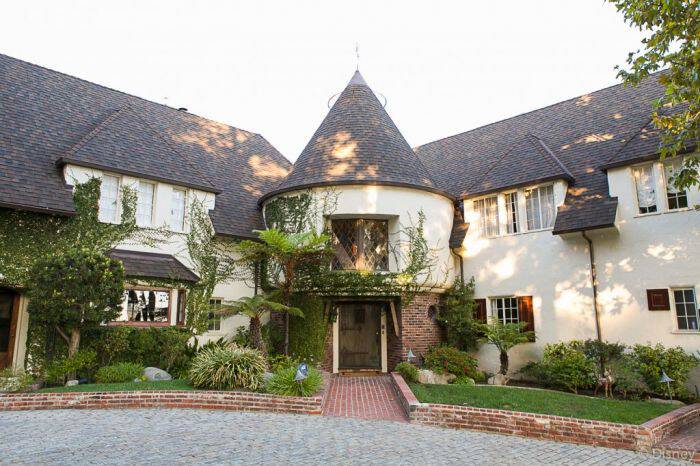 Sleeping Beauty Diamond Edition releases on October 7 and Maleficent comes out on DVD on November 4.  Just last week I traveled to Los Angeles to learn more about the bonus features on these discs (more on that to come – you’ll love it!) and as part of the trip I had the rare opportunity to tour Walt Disney’s Los Feliz home. This is where he lived when he started working on Sleeping Beauty and around every corner you can see the fairy tale that he brought to life.  Doesn’t it look magical? 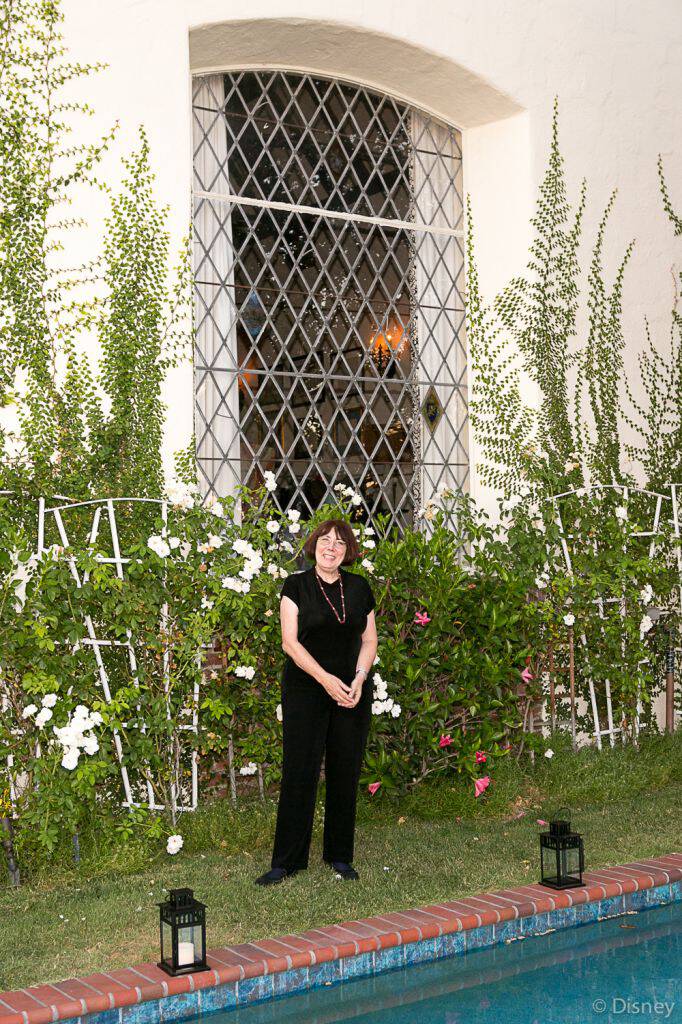 Our tour was guided by Paula Sigman-Lowery, the lovely Disney historian who  knows EVERYTHING about Walt Disney! It was fascinating to talk to her about his time in this home with his family.  I love to hear all the things we don’t already know about the man behind the Mouse. While showing us every room, Paula emphasized that this home is where Walt Disney was able to just be Dad.

“And, so this one’s the house where he got to be dad.  It was the house from which he drove every morning to take the girls to school. He drove them to their music lessons, to their dance lessons.  He took them to the opera.  He and Lilly wanted to make sure that they had a normal childhood growing up.  And in fact, Diane was one day at school and she came back to her dad that night and she said, dad, are you Walt Disney? They had, they had a very quiet, private life. ” – Paula Sigman-Lowery 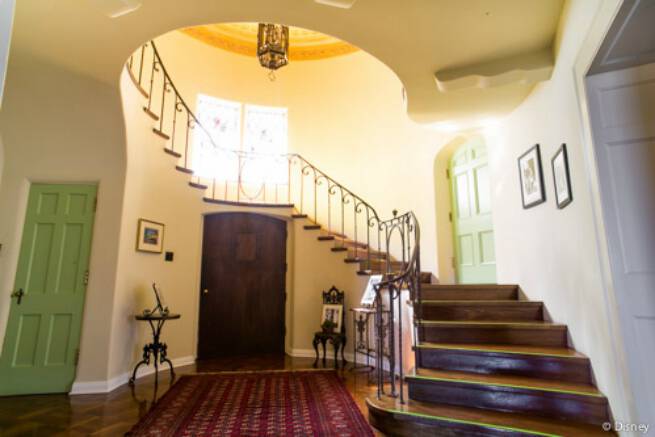 The foyer of the home is gorgeous with a winding staircase. As soon as you look up you notice the ceiling. Walt hired a graduate of the Vienna Academy of Fine Arts to paint the beautiful ceiling murals. There’s another one in the dining room.

So much detail!  My overall feeling about this home is that it’s very ornate with so many magical little details, yet it’s not overdone. Absolutely perfect! The owners today have really made an effort to keep everything in a 1930s feel, as it was when the Disney family lived here.

At the top of this staircase you can look down into the living room (pictured below).  I love this little story of that special spot.

“This is what Diane, the eldest daughter, called Christmas tree point.  Because on Christmas morning, the girls, who’s rooms were here and down the hall, would come running over to the little Juliette balcony and look down at the beautiful Christmas tree that was erected with all the presents around it. ” – Paula Sigman-Lowery

This is the living room, which was kept comfy as a place for the family to spend time together. They did a lot of reading. We learned that there were tons of books in the house for the girls.  Something my family has in common with the Disney family – who knew?!

This picture is found in the living room of Walt Disney and his daughters. Paula said that Diane was about 15 in that photo and Sharon was about 12. Can you imagine growing up in this house? It would be like living in a storybook!

This is the beautiful dining room. Take note of the mural on the ceiling in here too. It’s not easy to tell from this photo but there are some fantasy-like creatures painted in there!

Here’s a look down from the top of the staircase.  The green door about halfway up the staircase leads to another staircase.  It was later hidden by Lilly, Walt’s wife, with a grandfather clock.

I absolutely LOVE these ceilings!  And the railing is somehow simple yet fancy. That’s how the entire house is. Gorgeous!

This is one of the girls’ bedrooms where he loved to read books and tell stories to his girls.

“It’s exciting to think about this home being the foundation for the continued storytelling of a father with his daughters, of Lilly with the daughters.  And that Walt being the great storyteller of the 20th century.  This is the house where stories are told. ” – Paula Sigman-Lowery

Ta da! This was a really cool part of the tour. This area was actually the exercise room, later turned into a playroom for the girls.  But right now you can find the actual wardrobe worn by Angelina Jolie and Elle Fanning in MALEFICENT.

“Walt was very athletic.  He played not only badminton and swimming and taught the girls to swim down in the pool.  He and Lilly were avid skiers.  The children became great skiers. They went ice skating in the winter time.  He played polo and so, this room, in addition to being his exercise room, where he kept his athletic equipment, was filled with his trophies from playing polo.  And the walls were covered with pictures of his polo ponies.  So, when the girls got big enough to have a real play room, they loved this room because they loved coming in where all the horses were.” – Paula Sigman-Lowery

Our group was pretty excited to get up close to these clothes!

The backyard is gorgeous!  This is how they had it set up for us to enjoy cocktails and dessert the evening we were there. Isn’t it just amazing? The view!

Here’s a close up of the centerpieces on each table. That’s the thing about Disney: they think of everything, just as Walt did in building this beautiful home for his family.

So many neat details all around the house. The more you look, the more you see. How cute is this guy?

And here is a better look at the view from the backyard. Just stunning!

When we arrived to tour the home it was nighttime and this is a better picture of what we saw.  I almost think it’s more magical at night, don’t you?

Here is the backyard pool, which was not actually there when the Disney family lived there, but there was a pool further down the hill on the property where Walt and Lilly taught the girls to swim.  You can also see the girls’ playhouse, maybe my favorite story from our visit:

“Take a look at the Snow White play house that Walt had built for his girls.  Walt had it built for the girls over Christmas.  He had his studio carpenters come out and it is lit, it is electrical, it is plumbed and it has a telephone in it.  And so the next morning, the girls are out there and the phone rings.  And it’s Santa asking them how they liked the house.  Of course, Santa kind of sounded like dad.” — Paula Sigman-Lowery

So now you know where some of the ideas for Sleeping Beauty and the story of Maleficent originated. Who knows what one might come up with in that house? There is magic and inspiration everywhere!  I’m so thrilled to have been able to tour it and share these photos with you.

Sleeping Beauty Diamond Edition releases on October 7 and Maleficent comes out on DVD on November 4.  Grab your copies and while you’re watching remember where it all started!