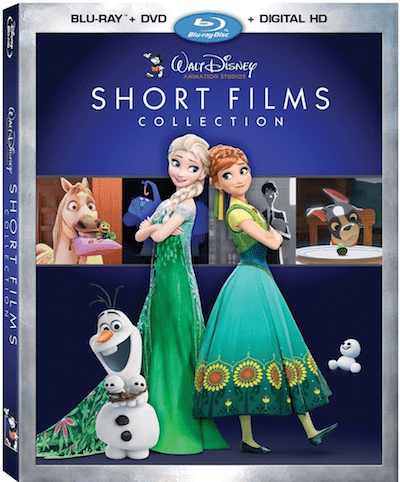 Another fun Disney home release is coming our way late this summer and I’m so excited about it! The Walt Disney Animation Studios Short Films Collection releases on Blu-Ray on August 18, 2015 and includes 12 of our favorite short films!

From Walt Disney Animation Studios comes the Shorts Film Collection, an extraordinary new collection of award-winning and beloved short films featuring Disney’s Frozen Fever, starring Anna, Elsa, Olaf, Sven and Kristoff, and the Oscar®-nominated Lorenzo. It will be available early on Digital HD/Disney Movies Anywhere August 11 and you can bring It home on Blu-ray™ August 18. Enjoy this must-own collection with all-new extras including an inside look at the Disney Animation shorts, featuring introductions and interviews with the acclaimed filmmakers themselves.

This looks fantastic! Do you have a favorite? I think Paperman is mine.

Here’s a slideshow of all 12 of the shorts included on this disc:

The Walt Disney Animation Studios Short Films Collection will be out on Blu-Ray on August 18 and is available to pre-order now! Can’t wait to bring this home!