“Transformers, more than meets the eye…”   I remember that song from when I was a kid and used to watch Transformers on TV and play with the toys.  They were cool back then and they’re even cooler now.  The Transformers brand is undergoing some awesome changes with the new Transformers Prime product line! 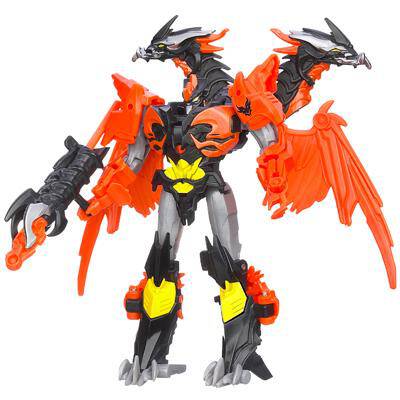 Based on the third season of the Emmy Award-winning animated series, Transformers Prime, this new line of toys includes Transformers Beast Hunters. In the series the Beast Hunters have to fight off the Decepticons and a new enemy, the Predacons.   These Predacons are dragon-like creatures with Predaking at their helm.  Check him out. He’s wild looking!  I love it!  The Transformers really have gotten so much neater since I was a kid.

Hasbro’s new line of Transformer Prime products is going to be based on the story of the Beast Hunters and will feature many of these new Predacon characters (aren’t the bad guys the most fun to play with?!) along with new designs of favorite characters like Optimus Prime, Bumblebee, and more.  Don’t they all look awesome?

We had the opportunity to review one of of these new Transformer Beast Hunters, the awesome Optimus Prime!  My kids were so excited to get this guy out of the box and start playing with him.  He came with some cool accessories like a saber, iconic pulse launchers and missiles.  That green saber is a big time hit with my son!

Optimus Prime converts into a truck and back into a robot.  The toy comes with some great instructions which is a bonus for me because I needed them.  As soon as my husband got home from work and found us playing with this he had that guy switched back and forth from truck to robot in no time flat.  Hmmm….  Maybe he has more Transformer background than I do.         😉

The new line of Transformer Prime toys is really cool. The characters are awesome and being able to switch them back and forth from robot to something else provides for hours of play.  Now my only problem is to keep my kids from fighting over it!  Be sure to follow Transformers on Facebook to be the first to hear about their latest products. You can find some cool videos on their YouTube channel, too!

Hasbro is generously offering one of my readers their own Transformers Prime Beast Hunters Voyager Class toy!  This giveaway is open to US residents and will end on March 22, 2013.  You can enter to win [HERE].

I was provided with a complimentary Transformers Prime toy to facilitate this review.  The opinions in this post are 100% mine.  You can read my full disclosure policy here.