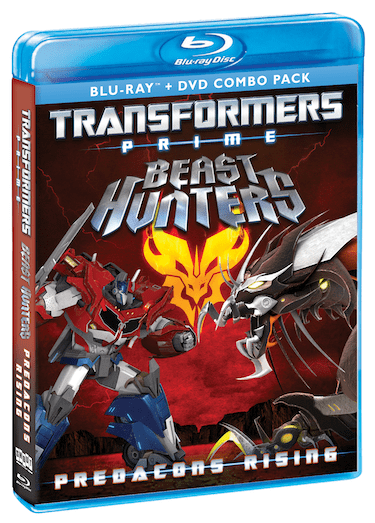 “Transformers! More than meets the eye…”  Isn’t that one of those songs you knew as a kid that just sticks with you?  I get that in my head and it just stays there. It’s cool to see that Transformers are still popular so many years later.  If you’ve got a little Transformers fan at home, check out this news! Transformers Prime: Beast Hunters – Predacons Rising releases on Blu-ray & DVD on October 8!

A resurrected UNICRON has taken over the now-lifeless body of MEGATRON to seek vengeance on the AUTOBOTS and ultimately, the destruction of Cybertron.  This formidable enemy forces an unlikely alliance between the AUTOBOTS, DECEPTICONS, PREDAKING and two new PREDACONS, who come together in an epic battle to help protect their newly restored planet.

Looks pretty cool and action-packed! Here’s how this fits in with the other Transformers shows:

Brimming with spectacular CG animation, a captivating storyline and unforgettable characters from the TRANSFORMERS PRIME lore, this 90-min epilogue to the final season delivers entertaining cinematic adventure the whole family will enjoy.  Wrapping up the series that chronicled the epic battle between the DECEPTICONS and the AUTOBOTS, the Blu-ray+DVD combo pack and DVD edition contain insightful bonus content, taking viewers behind-the-scenes. Available in stores everywhere, TRANSFORMERS PRIME BEAST HUNTERS – PREDACONS RISING is an essential home entertainment collection for TRANSFORMERS fans of all ages. The deluxe Blu-ray+DVD combo pack is priced to own with a suggested retail price of $24.97; and $16.97 for the DVD.

You can pre-order on Amazon now or keep your eyes peeled to find Transformers Prime: Beast Hunters – Predacons Rising in stores on October 8!