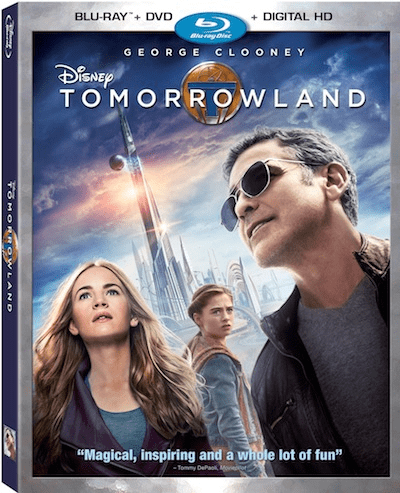 Disney’s TOMORROWLAND releases on Blu-Ray and DVD on October 13 and is available for pre-order now!

Dreamers Wanted…Disney invites you to an incredible world of epic imagination where anything is possible.  Buckle your seat belt, as the director of The Incredibles takes your family on an action-packed thrill ride.

Join former boy genius Frank (George Clooney), optimistic, science-minded teen Casey (Britt Robertson), mysterious Athena (Raffey Cassidy) and the brilliant David Nix (Hugh Laurie) in a world of pure Disney imagination.  Tomorrowland transports you on an inspiring and magical journey of wonder and adventure to a place where if you can dream it, you can do it.

SO good! Such a fun movie for the whole family, and there are a bunch of exciting bonus features on the disc:

Discover everything there is to know about the making of Tomorrowland through Director Brad Bird’s perspective.

Believe it or not but Nix used to host a children’s television program about science. Now watch the recently discover outtakes from the show.

An animated story of how Tomorrowland came to be.

Go back in time and watch this original commercial for the Blast from the Past store.

Go grab your family’s copy of Tomorrowland for your home collection!