We were provided complimentary tickets to Universal Orlando to facilitate my review. The opinions in this post are 100% mine. You can read my full disclosure policy here. 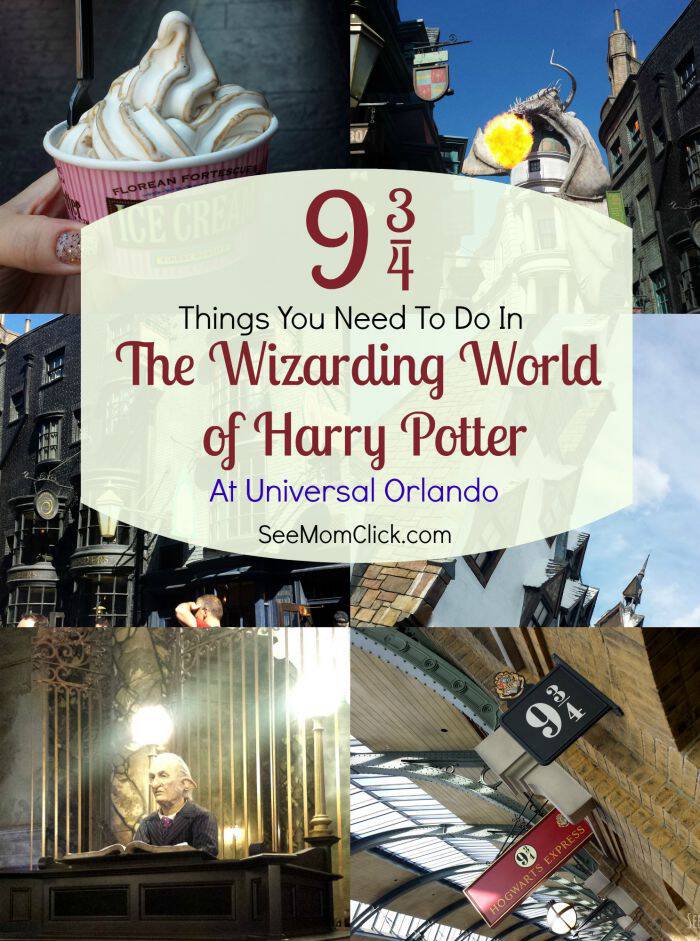 Last fall we visited Universal Orlando theme parks for the first time. We had the best day together and my young kids, ages 5 and 9, totally enjoyed themselves! Look for another post soon with our favorite rides and attractions and some tips for making the most of your day at the parks. (UPDATE: That post is up!) At the top of the list is The Wizarding World of Harry Potter! My  husband and I are both Harry Potter fans and we tried hard to get the kids to watch at least the first movie before we left for our trip, but they were worried they’d be scared and wouldn’t watch. I tell you this because they still had a GREAT time in these sections of the parks and came home and immediately started watching the movies. So even if you’re not big into Harry Potter or your kids aren’t famlilar with it, there’s still tons to do and see that your family will love. And if you are a Harry Potter fan? Well, you’re in for an extreme treat. Being in Diagon Alley or Hogsmeade is like walking into the movie. It’s incredible! 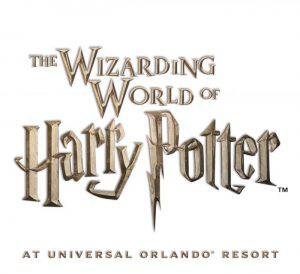 Here are some of our favorite things to do while you’re there. Plan your day carefully so you don’t miss any of your must-sees! We ended up spending a lot more time in Diagon Alley at Universal Studios Florida than we did in Hogsmeade in Universal Islands of Adventure. I think that was okay for us with kids our ages, but I’d definitely suggest getting familiar with what’s in each section, deciding what’s most important for you to see, matching that up with each park’s hours (because they don’t always close at the same time) and planning your day accordingly to get the most of your visit. Now onto my highlights! 9 3/4 of them to be exact.  😉

1. Visit Ollivanders and Cast A Spell 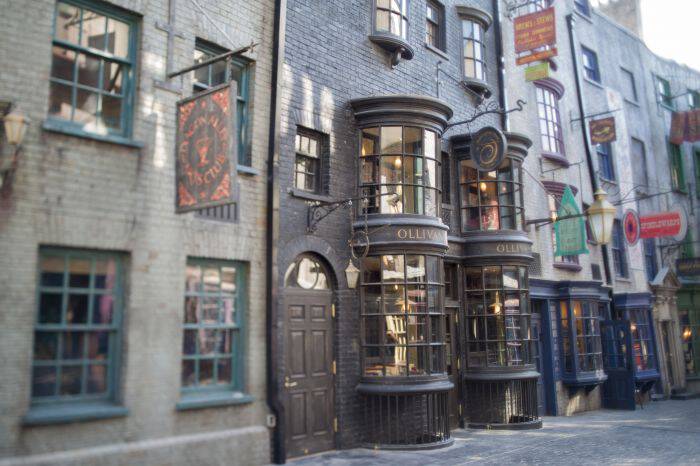 Being in Diagon Alley is like BEING in Diagon Alley in the movie. It is incredible how they recreated every little detail and brought it to life. Everywhere you look there’s something interesting to see. Ollivanders is the famous wand shop and not only can you shop for your own wand (they’re stacked all the way to the ceiling!) but you can participate in a short show where a wand chooses its wizard.

The wands for sale include replicas of famous Harry Potter characters’ wands plus wands just for you and your little wizards. Some of them are interactive and come with a map of The Wizarding World of Harry Potter. On the map there are certain locations marked where you can use your interactive wand to cast a spell and make something happen – a display in a window move, a fountain turn on, etc.

YUM! This was soooo good! I was the only one in my family that chose Butterbeer Ice Cream when we stopped for a treat at Florean Fortescue’s Ice Cream Parlor but there were plenty of other interesting flavors that my husband and kids just had to have. We swapped spoons and tasted them all. Everything was delicious (but I highly recommend the Butterbeer!).

3. Ride Harry Potter and the Escape from Gringotts

Harry Potter and the Escape from Gringotts might be the coolest ride ever. Not only is the ride itself super exciting and just awesome, but the lead-up to board is incredible. First you enter through the gorgeous marble lobby of Gringotts Bank.

The goblins are hard at work and they actually move like they’re real!

Here’s the head banker, the last one you see before you start to make the descent underground to board the ride.

The ride has you board this cart and it’s truly the best of all possible worlds when it comes to rides: part roller coaster (though no insane hills), part 3D experience, and part story. You’ll see your favorite characters inside and let me just tell you, Voldemort in 3D something you won’t soon forget. Loved that part of the ride! It’s such an exciting adventure. This video gives you a great look at the ride.

Right next to Gringotts bank is the Gringotts Money Exchange where you can exchange your Muggle money for Gringotts Bank Notes that can be used to purchase items within Diagon Alley and Hogsmeade (plus the rest of Universal Orlando’s two theme parks). The goblin banker will talk to you, too, if you ask him a question. He really answers! Though be forewarned, he’s a bit of a grump and doesn’t always like to be interrupted from his work. We stopped in just to chat with him and didn’t exchange any money so feel free to visit even if you’re happy with your Muggle cash.

5. Get HOT Under The Dragon Breath

My kids were on the fence about this guy but I loved him! On top of Gringotts bank sits a giant dragon protector. And every so often you’ll hear a grumble and know that the he’s getting ready to breathe fire. It’s a little bit loud and pretty warm if you stand right underneath of him. A fire breathing dragon. You can’t miss this one if you tried!

6. Lunch at the Leaky Cauldron

You’ll need to take a break and get some grub (Butterbeer ice cream is divine but it’s not lunch!) and the Leaky Cauldron is a great choice. They serve classic British fare in a pub-style atmosphere.

What a neat place to eat! And if you’ve got kids with you they do have a kids’ menu featuring favorites like mac n cheese, which is what Leo orders pretty much wherever we go so this was a safe bet for us. Delicious!

7. Talk to the Knight Bus Conductor

If you remember in the Harry Potter movies, the Knight Bus provides emergency transport for the stranded witch or wizard. You can find this bus before you get into Diagon Alley in the London area of the new land. Walk right up and talk to the Knight Bus Conductor on his 3-story bus, complete with shrunken head on the rear-view mirror. Very cool!

We spent a good bit of time exploring Diagon Alley in Universal Studios Florida and when we were ready to head to Universal Islands of Adventure and check out that park, we boarded the Hogwarts Express at platform 9 3/4 at Kings Cross Station to arrive in Hogsmeade. You do need a park-to-park admission ticket to ride the train so make sure you have one and be ready to show it at the entrance.

The train ride itself is awesome but really the entire experience is just so cool. Again, every detail has been thought of. You really feel like you’re in the movie.

While you’re waiting to board (and it was a long wait but definitely worth it and we did keep moving – no total standstills) you’ll see owls and suitcases, all kinds of Harry Potter things everywhere. At one point you pass through the wall of the platform and it actually looks like you’re walking INTO the wall. The kids got a total thrill out of this!

Hogwart’s Express is a gorgeous big train, a perfect replica of the one in the Harry Potter books and movies. It’s just WOW when you see it for the first time at the station.

On your ride you see all sorts of things out the window and you’ll see some things through the door that goes out into the train too…like dementors! We loved this ride, and if you ride it back from Hogsmeade to Diagon Alley it’s a different experience. We didn’t make that trip but if you watch this video below it gives you a great look inside this ride.

9. Ride Flight of the Hippogriff

When we got off the Hogwart’s Express in Hogsmeade we were awed by the buildings covered in snow. It’s gorgeous!

After taking that all in and letting Leo cast a spell or two with his wand, we wanted to find a family-friendly ride to get on.

Flight of the Hippogriff ended up being my kids FAVORITE ride in both parks. I think we rode if four times in a row before my husband and I said we needed to try to see some other sights while we were there. This is a kid-friendly coaster, not too wild but still adventurous and fun, that takes you around Hagrid’s hut and past a ‘real’ Hippogriff. So much fun and while we were there it was a really quick line, not much wait at all, so we got on repeatedly in a short amount of time. If you have little kids with you don’t miss this one!

The Wizarding World of Harry Potter is such a cool place, it’s hard to put into words. Being there is truly like being INSIDE of the books and movies. You’ll definitely want to bring a piece of it home with you. I highly suggest stopping into a shop or two to find some special things you won’t find in any other places (not even online).  This cool shop pictured above is Weasleys’ Wizard Wheezes and has some cool toys and novelty items. You can take a look at all of the shops in Diagon Alley here. Our favorite was Ollivanders!

This was a neat shop too, Filch’s Emporium of Confiscated Goods, and is located in Hogsmeade. See all the Hogsmeade stores to see which appeal to you. There’s an Ollivanders on that side also!

There is just so much to do and see in The Wizarding World of Harry Potter that it’s hard to get it all into one post without writing my own novel, and I’m no J.K. Rowling.  😉 So these are our top picks and I hope they help you plan your next trip. I’d definitely suggest spending some time on the Universal Orlando website to familiarize yourself with both Hogsmeade and Diagon Alley. Time goes fast in these parks and it’s a good idea to have a list of things you want to be sure to see while you’re there.

Don’t forget to check out my post on the 9 Things You Need to Do at Universal Studios Theme Parks to see our favorite attractions in the rest of the park. And go ahead and drool over my review of Antojitos Authentic Mexican Food at Universal CityWalk!