I was provided with a complimentary copy of Teen Beach Movie to facilitate this review.  The opinions in this post are 100% mine.  You can read my full disclosure policy here. 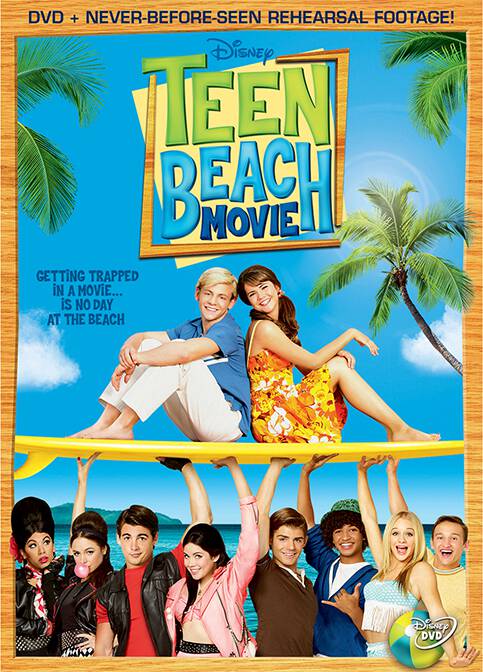 Have your kids been flipping out over Disney Channel’s Teen Beach Movie? Mine have!  If they haven’t caught it on TV or just need a way to watch it in repeat you’re in luck!  Teen Beach Movie is available on DVD already and I can tell you, it’s a fun one!  We popped some popcorn and watched it last week and had so much fun! 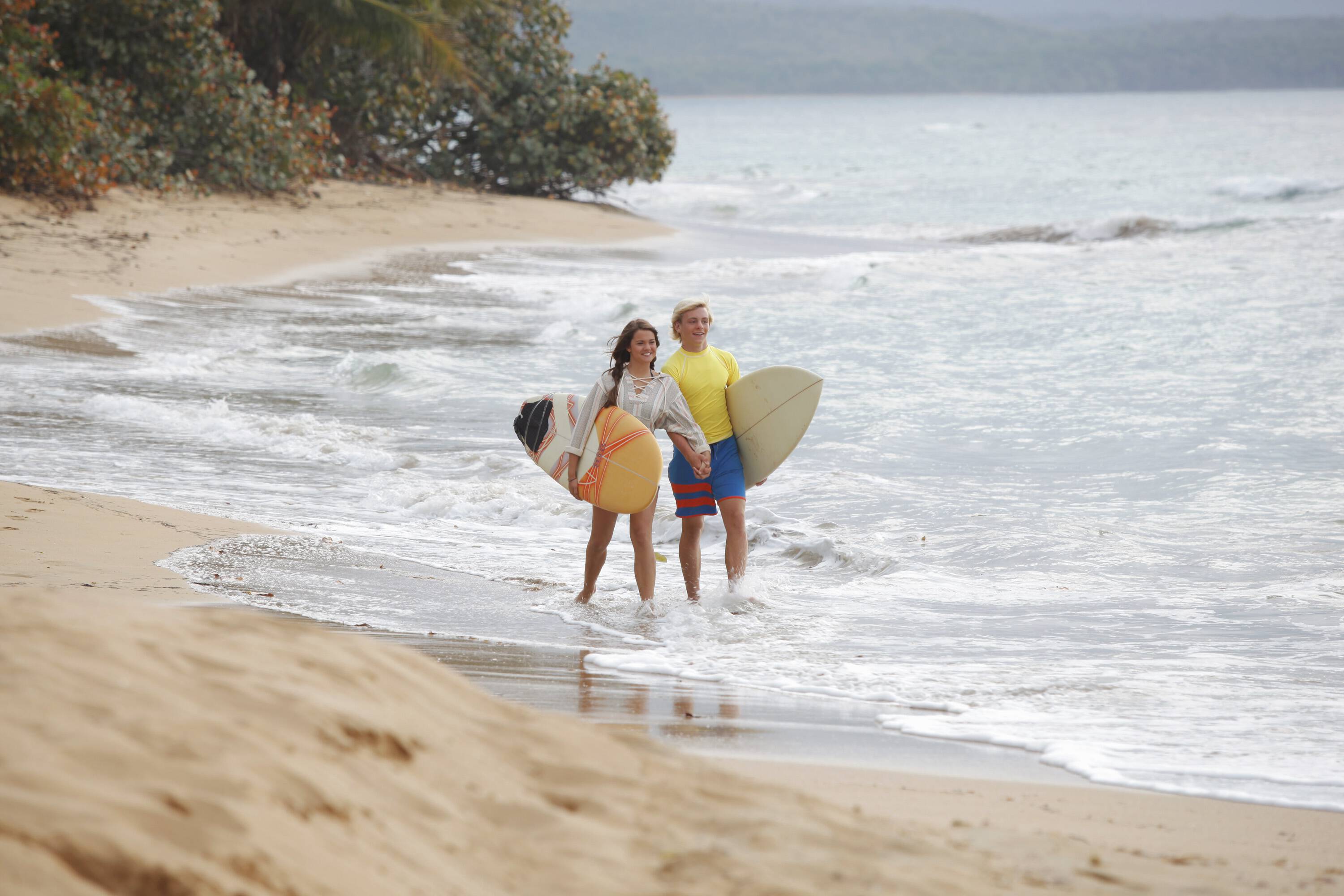 Teen Beach Movie sort of reminded me of a modern-day Grease.  Not the same story line, definitely waaaaay cleaner and appropriate for kids, but it’s got TONS of awesome singing and dancing.  I’m singing one of the songs in my head right now while I’m writing!  Such catchy stuff and the dancing is awesome.  The movie stars Ross Lynch (Disney Channel’s “Austin & Ally”) as Brady, Maia Mitchell (ABC Family’s “The Fosters”) as McKenzie.  They are the two main characters, a young couple that is about to be torn apart when McKenzie has to leave with her Aunt to go to school and leave the fun of the beach and summertime. But before she goes she has to surf one more killer wave.  Brady goes out into the water to save her and they’re both drug out to sea….and into ‘Wet Side Story’!  Yes, they land in a movie and this is where they sing and dance and have some serious fun. It’s also where McKenzie gives some real thought to her future and what she really wants versus what’s been expected of her. I won’t spoil the ending for you, but it’s a definitely feel-good movie! 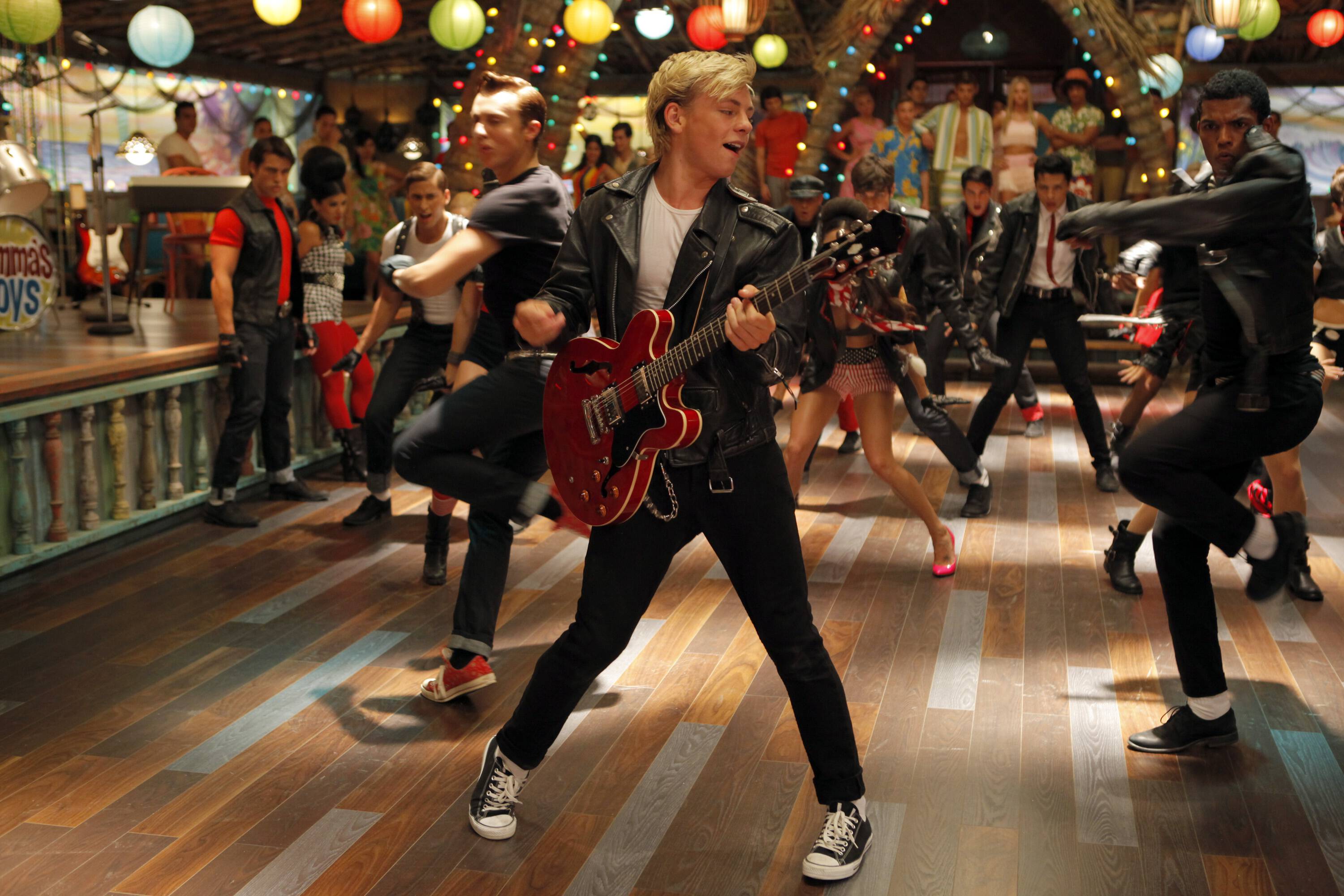 “Teen Beach Movie,” part of the Disney Channel Original Movie franchise which introduced a generation to movie musicals, follows teen surfing sweethearts Brady and McKenzie, who together ride the last wave of summer, one that mysteriously takes them into a classic beach party movie, “Wet Side Story.”  There, it’s surfers versus bikers for control of the beach hangout…and everyone spontaneously breaks into song and dance.  Now, Brady and McKenzie must try to return to present day, but their lives may be changed forever when they inadvertently alter the movie’s romantic storyline — and the handsome leading man, surfer Tanner is falling for McKenzie while biker girl Lela is swooning for Brady.

Want to get your toes tapping? Check out this clip!

Were you singing along by the end?  The tunes are so catchy and fun.  Teen Beach Movie is rated G so it’s totally safe for kids to see.  I actually noticed that about it while watching it. My kids, though they’re in love with the Disney Channel, are a little young for a ‘teen’ movie, but there’s nothing suggestive or offensive about this movie at all. I was totally comfortable with them seeing it and enjoyed watching it with them.

Here’s another one of my favorite songs!

Now I’ll be singing that one all night!  Fun songs, right?!  It really is a cute movie. My daughter Lily is nearly 8 and she was loving all the music.

Even after the movie is over there are some cool Bonus Features. We stuck around and watched these too. More dancing! Check out exclusive dance rehearsal footage of seven musical numbers (featuring Maia, Ross and the cast) shot during the production of the movie by Choreographer Christopher Scott. Including the never-before-seen “Coolest Cats In Town” number that never quite made it in the movie.

Want more? Check out this slideshow!

If you haven’t seen Teen Beach Movie yet I definitely recommend checking it out!  It’s such a fun, uplifting and high-energy film.  Great for kids and adults, too.  You can order on Amazon and get a copy for your family!