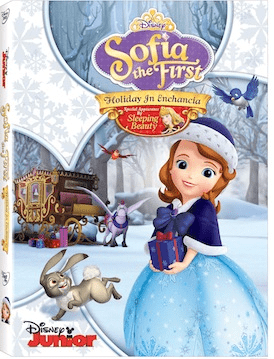 If you have Sophia the First fans at home mark your calendars for this upcoming release. Sophia the First: Holiday in Enchancia will release on DVD on November 4. And guess who has guest role? Princess Aurora!

When a snowstorm prevents King Roland from returning home in time for the holidays, Sofia leads her family on a brave expedition to find him. Princess Aurora from Disney’s “Sleeping Beauty” makes a special appearance to help Sofia and her animal friends reunite the royal family.

There is some great talent involved in this one, too:

I’ll let you know when it’s available for pre-order on Amazon.   In the meantime, this book might give you a better look at the story.