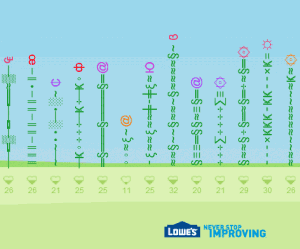 Looks like I hopped on Twitter at just the right time.  I found a fun tweet from Lowe’s!  Right now they’re giving us the opportunity to earn a $10 Lowe’s gift card just for tweeting, or planting a tweet.  It’s kinda fun!  This is all very self explanatory, but here’s what you do:

Here’s how you can win:

How to accumulate points via foursquare:

Pretty cool, right?  So you can give me a boost by retweeting my tweet, then tag me in yours, @PandorasDeals, and I’ll retweet yours, too!  Good luck!  Let’s round up some Lowe’s gift cards!
https://twitter.com/PandorasDeals/statuses/198110932684115968