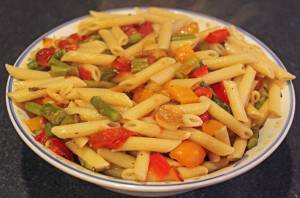 This is one of those recipes I threw together at the last minute and now it’s my favorite go-to meal.  With all the fresh veggies this one is perfect if you grow a vegetable garden.  I can pluck the grape tomatoes and peppers right out of the garden and have most of the ingredients without having to hit the store.  So easy, and it’s so delish, too! Here’s the recipe:

Preheat the oven to 400 degrees Fahrenheit. Cut the woody ends off the asparagus and cut the spears up into about 1-inch pieces. In a bowl combine the asparagus pieces, grape tomatoes, the chopped peppers, and the garlic cloves. If they are large cloves you can cut them in half. Drizzle the vegetables with olive oil and season with salt and pepper to taste. Stir the veggies to coat them all in the oil and salt and pepper. Dump the veggies out onto a baking tray. Put them on the center rack in the oven. Roast for 20-25 minutes.

After you put the vegetables in the oven, put a large pot of water on the stove and bring to a boil. Cook the pasta as directed on the package. Usually the time it takes for the water to boil and the pasta to cook is enough time to roast the veggies. That's why I don't start the pasta until I stick the veggies in the oven. If you're using a pasta that cooks faster you might want to wait a few extra minutes before you start your water on the stove.

When the pasta is cooked, drain it. The veggies will be done when they are all fork tender and the tomatoes have burst. Put the veggies into the pot with the pasta and stir. Usually the juice from the tomatoes and other veggies is plenty to coat the pasta, but if you feel like it's too dry just add a bit more olive oil.

You could try this with other veggies, too. I'm going to try zucchini this summer! Just try to cut the pieces so they'll cook at the same rate as the rest of the veggies.

Is 6 cloves of garlic too much? Honestly, I throw the entire head in there. I LOVE roasted garlic. Pity the fool that sits next to me for the rest of the night, but it's so good for you and I happen to think it's delicious. Use the amount you like, more or less.

You could eat this cold the next day as a pasta salad for lunch. It's delish!

I usually use penne pasta when I make this but you could use anything.

Mixing the veggies up with olive oil, salt, and pepper

Veggies before they go into the oven

Veggies coming out of the oven!