Disney has provided me with an expense paid trip to Los Angeles for the #MoanaEvent and #ABCTVEvent in exchange for my coverage of the events of the trip.  No other compensation is given. The opinions and experiences in my posts are 100% mine.  You can read my full disclosure policy here.

I’m going to fess up and tell you I’m not much of a TV watcher. I just can’t seem to find the time to sit down and watch something unless I’m REALLY interested. And after visiting the set of Speechless on ABC, I’ve finally got a new show that I watch weekly: ABC’s Speechless is on every Wednesday night at 8:30pm ET. I wasn’t too familiar with the show before this trip, and as luck would have it, on my flight home I had free entertainment and Speechless was one of the shows that was available. So I watched it, and I just loved it so much.

Speechless stars Minnie Driver as Maya DiMeo, a mom on a mission who will do anything for her husband, Jimmy, and kids Ray, Dylan, and J.J., her eldest son with cerebral palsy. As Maya fights injustices both real and imagined, the family works to make a new home for themselves, and thankfully found just the right person in Kenneth (Cedric Yarbrough) to help give J.J. his “voice.”

I’ve always been a fan of Minnie Driver and though my family situation is different than the one she is part of on this show, I can so relate to her fighting for what’s right for her kids. And being a bit snarky yet so loving. I’m that mom, and I’m betting many of you are too. So take a look below at the trailer if you’re not familiar with the show. I think you’re going to love it.

You can see Speechless is full of laughs, heartwarming moments, and provides a very realistic look at a familiar living with a disability. I think this is so important so those of us that might not know how to relate or react can truly understand that everyone just wants to be treated with kindness and respect. 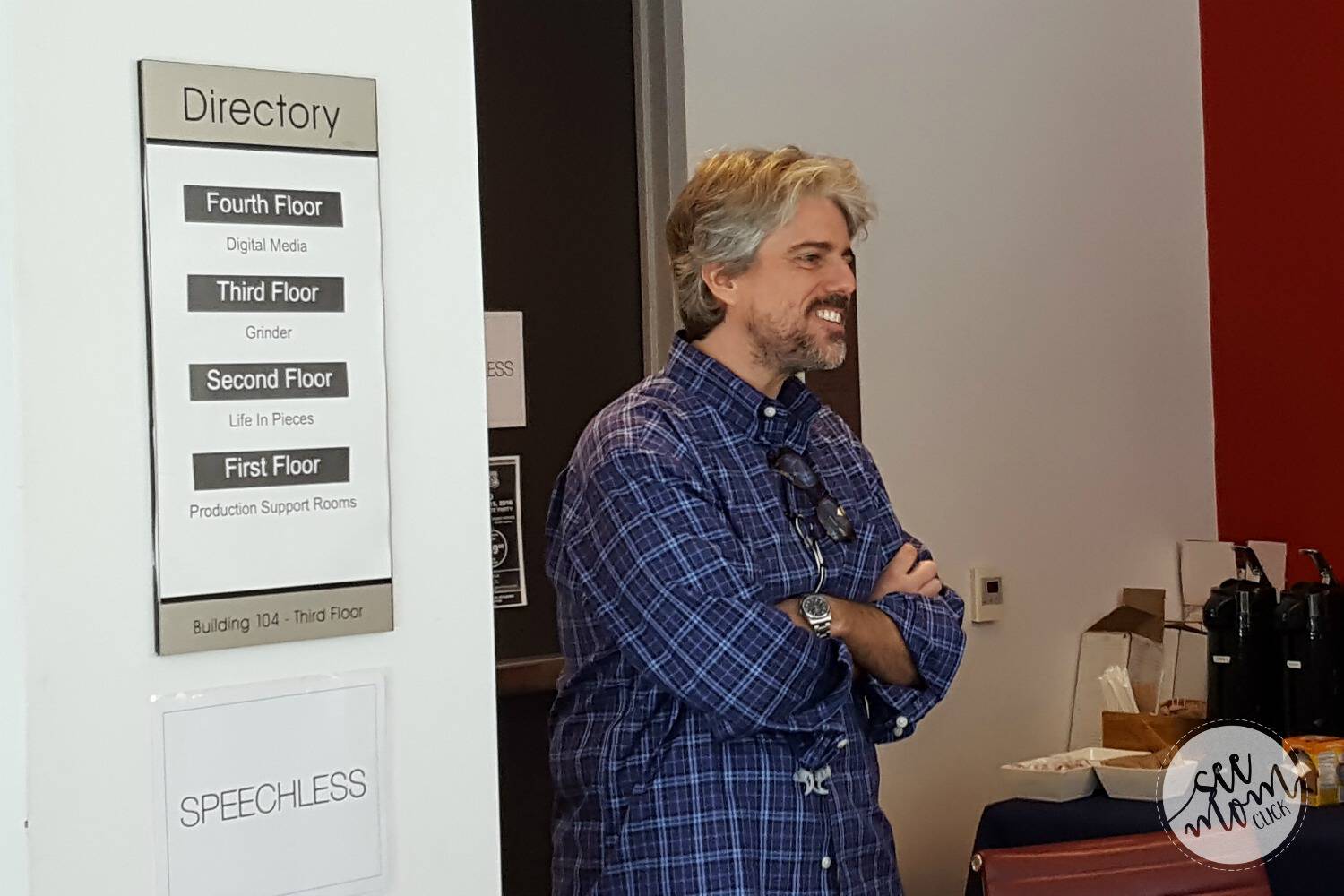 Before I hit the set of Speechless I had the chance to chat with Scott Silveri, who is the Executive Producer of the show. The cool thing about Scott being part of this show is that it’s loosely based on his own life. He grew up with a brother with special needs, and it was important for him to share his experience with the world. Here are some of the highlights of his interview:

On His Family’s Reaction To Telling This Story

They were, they were really incredibly supportive about it. I made it clear from the beginning to them, as I try to make clear to anybody else, this is not their story.  This is not my story or my brother’s story.  What’s important to me is to capture a couple of elements about the time we had growing up.  And they were very, very supportive about that.

I think choice is very important in how you live your life. You can take whatever challenge is thrown your way and wallow in it, let it define you, or have it make you a better person or more fun person or more interesting person.  You can curse the heavens or you can band together and make it work.  And that’s what my mom did.  That’s what my dad did. And I wanted to celebrate that at every turn. this is intended to be a love letter to my mom and my dad.

On Casting Micah Fowler as JJ

Micah Fowler plays JJ, the young man with cerebral palsy. He is a total gem. I had the chance to meet him and he truly just lights up the room. When asked when he knew that Michael was right for the role, this is what Scott said:

I knew the second I saw the tape.  We did a, a wide search.  We took in tapes from all over the country.  I saw him and his, you know, he lights up the screen.  He’s funny. He’s so expressive. Like he doesn’t have the benefit of words.  It’s a challenge for us, thinking of the best way for him to express himself without them.  It’s a challenge for him making this stuff work, being present in the scene without lines.  But he did it from Day 1.

I’ve been wanting to do a show like this for 20 years, as long as I’ve been doing this, but he was the one that allowed me to do it.

On The Relationship Between Kenneth and JJ

Kenneth is played by Cedric Yarbrough and is JJ’s aide, his voice. They have a great rapport on screen and off.

They just, they just hit the ground running. They’re brilliant together. In the early iteration of the script, there was no Kenneth.  He (JJ) spoke through a computer. And then I met a woman who’s since become a consultant on the show.  The technology’s unbelievable in the way it enables communication. It’s staggering.  When I was a kid in the ‘70s, there would be a board on somebody’s wheelchair: I want milk.  I want bathroom. And people have more profound things to say. It’s incredible the way technology’s being used to empower these kids to speak.

This young woman I met, Eva, is the one who I first saw communicating this way, and it was through an aide. She prefers it.  She finds it to be warmer.  She finds it to be more conversational, and there’s a flow to it.  I liken it almost to it’s like vinyl versus an MP3.  There’s just a warmth to it.  And when I saw her communicating with her aid, it was a lot easier for me.  It felt like more of a seamless conversation.

We cast Kenneth first.  Cedric was the first one to sign up on the show and I had him meet Eva, but he didn’t need it, because right from the beginning the two just had a fast friendship. They just clicked and they make each other laugh. They sure make me laugh.

On Feedback From Families Living With Disabilities

The reception that we’ve gotten from families in this community has blown my mind.  As somebody who feels this stuff very personally, if I was a viewer I’d be very, very cautious about it.  And I was really surprised, frankly, that people gave it a shot and embraced it.

I didn’t get into this for any sort of political sort of thing to win hearts and minds.  I just wanted to tell the story of this one family, but because there are so few representations, you can’t help but feel the burden of responsibility for people who are watching.  So, I’m glad we’re not disappointing them in large numbers.  I’m glad the majority seem to think we got it right, and I take that very seriously. 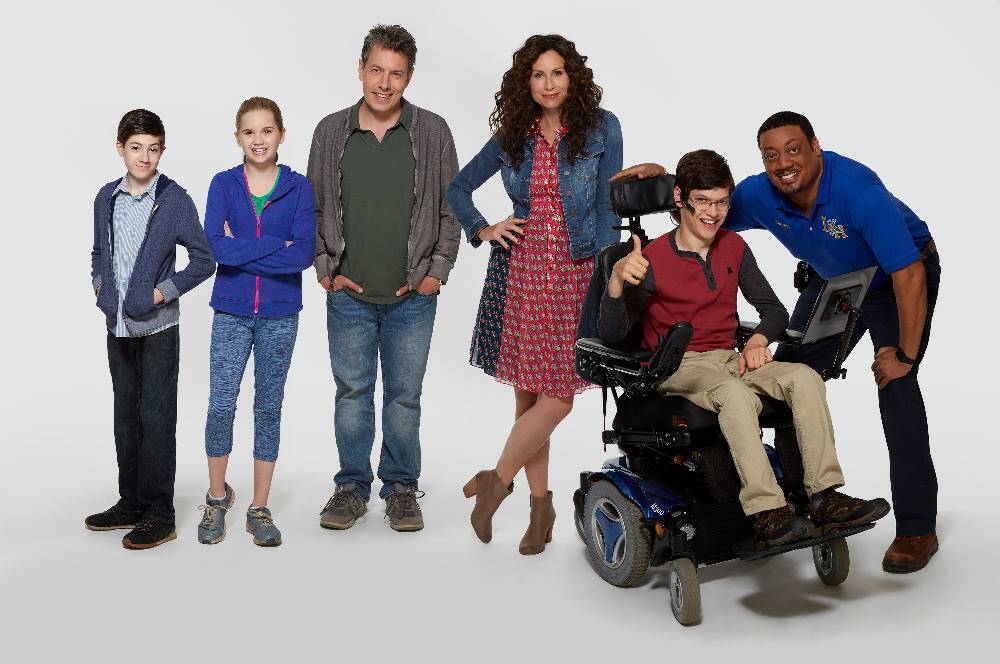 Here’s the cast of Speechless! I had the chance to meet all of them and they’re such a great bunch of talent. So friendly and so happy that we’re sharing the show with all of you.

John Ross Bowie who is ‘Dad’ Jimmy in the show chatted with us a for a bit before Minnie Driver joined him. He’s super nice and of course Minnie is too. She is such a mom. I just love her and the role she plays in this show.

Micah Fowler spent some time with us too. This young man is such a delight. Look at that smile! He left all of us feeling so happy. He was so thankful that we were there. And you really need to watch him as JJ on the show. Like Scott said above, it’s really a testament t him that he can bring such vibrancy to a part without lines.

Finally we got to meet Cedric too, who is just as cool as you’d imagine. This show works so well because I think they really nailed the cast. The cast, the writing, all of it makes for such a great story.

This was my first time on a TV show set so I really enjoyed looking around! It’s really like walking into a real house but there is no ceiling. If you look up, this is what you see.

Here’s the living room you’ll see on the show. The attention to detail is amazing to me. This house is meant to look pretty old and drab. There are stains in the kitchen sink. messes on the tables. It looks lived in and it looks REAL.

Here’s one of the boards that JJ uses to communicate.

Looks a bit like your house with the unmade bed, right? Mine too!

I’ll leave with a hilarious new clip from the show.