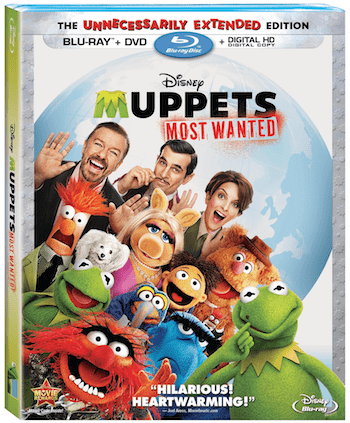 MUPPETS MOST WANTED on Blu-Ray releases on August 12! The instant video is available for pre-order now and the DVD will be soon, too.  This movie is SO fun for the whole family with great music and the Blu-Ray will include a bunch of great bonus features.

Muppet fans can experience this laugh and song-filled caper like never before on Blu-ray Combo Pack in an all-new “Unnecessarily Extended Edition,” featuring 12 minutes of exclusive scenes not seen in theaters! Also included on Blu-ray and Digital HD are additional hilarious bonus features, including Statler and Waldorf’s version of the movie, and the laugh-out-loud gag reel, “The Longer, Longest Blooper Reel in Muppets History.

The #1 comedy in America three weeks in a row, “Muppets Most Wanted” picks up immediately following the events of the smash hit “The Muppets,” as Kermit the Frog, Miss Piggy, Animal and the entire Muppet gang head out on a world tour. But mayhem follows, as the Muppets find themselves unwittingly entangled in an international crime caper headed by Constantine – the World’s Number One Criminal and a dead ringer for Kermit the Frog!

Bonus materials for the Blu-Ray combo pack include:

Mark your calendars! This is going to be a fun one to add to your home collection. If you like to watch on instant video  you can pre-order right here!