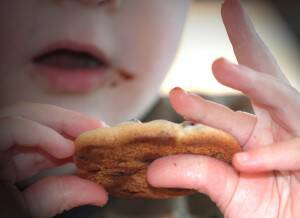 Recently my kids have discovered The Food Network and have taken a new interest in cooking.  So we’ve been having our own versions of  “Mom-let’s-have-a-cooking-show-tonight” most evenings during the dinner prep.  This is where we pretend we’re hosting our own cooking show and explain to our audience just how to make each dish we’re whipping up.  The audience is mostly in our imagination, but hey, nothing wrong with that!  My daughter, Bee, likes to help make dinner, and my little guy Benson is the baker during the day.

Last week I suggested we bake up some muffins but he wanted cookies instead.  And who am I to argue?  So I got on Pinterest because that’s my new hot spot for all the best of everything and I found a recipe for Cake Batter Cookies.  We like to be creative, though, so we tweaked it a bit and made our own delish version.  More to come on that recipe in another post soon!

I snapped this pic of my little guy savoring his cookie, a little bit in awe of its yumminess, with a just a smudge of chocolate on his mouth.  He would have eaten a half dozen cookies right then if I’d let him.  Well, they were soooo good, and he is a little cookie monster!