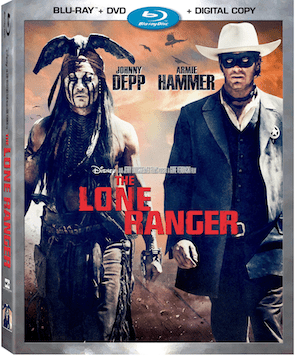 The Lone Ranger on Blu-Ray Combo Pack comes out on December 17!  I can’t wait!  First of all, it stars Johnny Depp and Armie Hammer.  *swoon*  But it’s also such a COOL, action-packed movie.  If you missed it in the theater, take a look at the trailer.

The DVD has some fantastic bonus features, too.

Riding The Rails Of The Lone Ranger (RT: 10:36) – BD & Select Digital Retailers Only
For the production of the movie, director Gore Verbinski had a five mile oval track built along with multiple engines and cars. See the incredible effortthat went into crafting such a detailed and important part of The Lone Ranger.

Armies’s Western Road Trip (RT: 14:28) – BD & Select Digital Retailers Only
Armie Hammer (The Lone Ranger) takes viewers on a tour of the scenic locations the production shot in as we see and learn more about the amazing places hewent to become The Lone Ranger.

Becoming A Cowboy (RT: 8:02) – BD & Select Digital Retailers Only
Before the cast began shooting the film, they had to learn how to shoot a gun…and ride a horse. In this piece we follow the cowboy (and cowgirl) cast to boot camp, where they got a chance to experience what their characters would really be living like in the Wild West.

The Lone Ranger comes out on Blu-Ray Combo Pack on December 17! Mark your calendar or pre-order now. http://t.co/ohBAe2ud6B #LoneRanger