When my kids were much younger I worked with them to learn sign language.  It made it easier to communicate with them before they were totally verbal and eased some frustrations by giving them a way to express themselves.  I was always amazed at how much they could learn at such a young age.  By the time my daughter was two she was signing entire songs. And I admit, I had fun learning with her!  Whether you’re teaching sign language, Spanish, German, or any other language, it’s smart to strike when the iron is hot which research shows is 6 months to 6 years of age.  While your kids are little it’s the perfect time to introduce them to a new language and Little Pim makes it fun and easy! 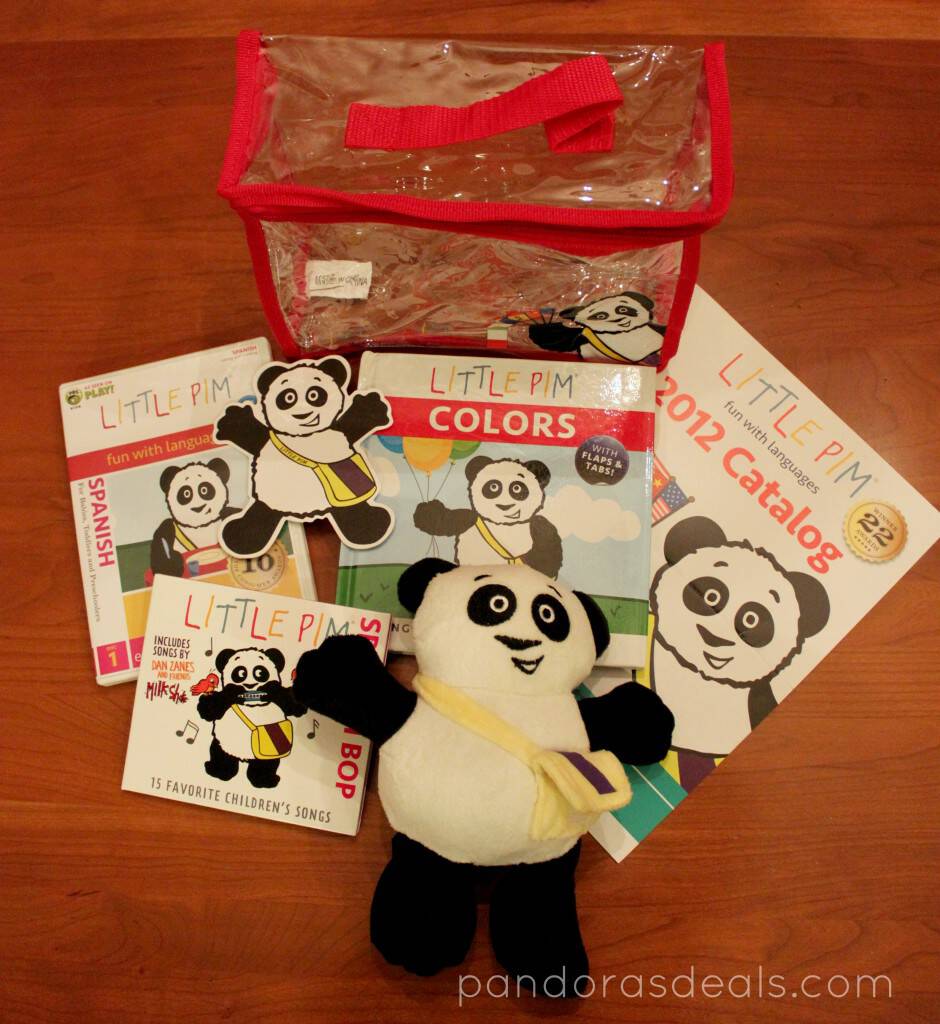 I was excited to have the opportunity to review a Little Pim Intro Kit and I chose the Spanish language since I was already pretty familiar with it, having taken several years in high school. Jog the old memory, right?!  Actually, in my last full-time job I worked on contracts with both employers and the local community college to train Spanish-speaking ESL (English as a Second Language) workers in certain jobs.  I know from my own experience that being proficient in the Spanish language in our area can only benefit my kids.  So we got our Spanish Intro Gift Set and dug right in! 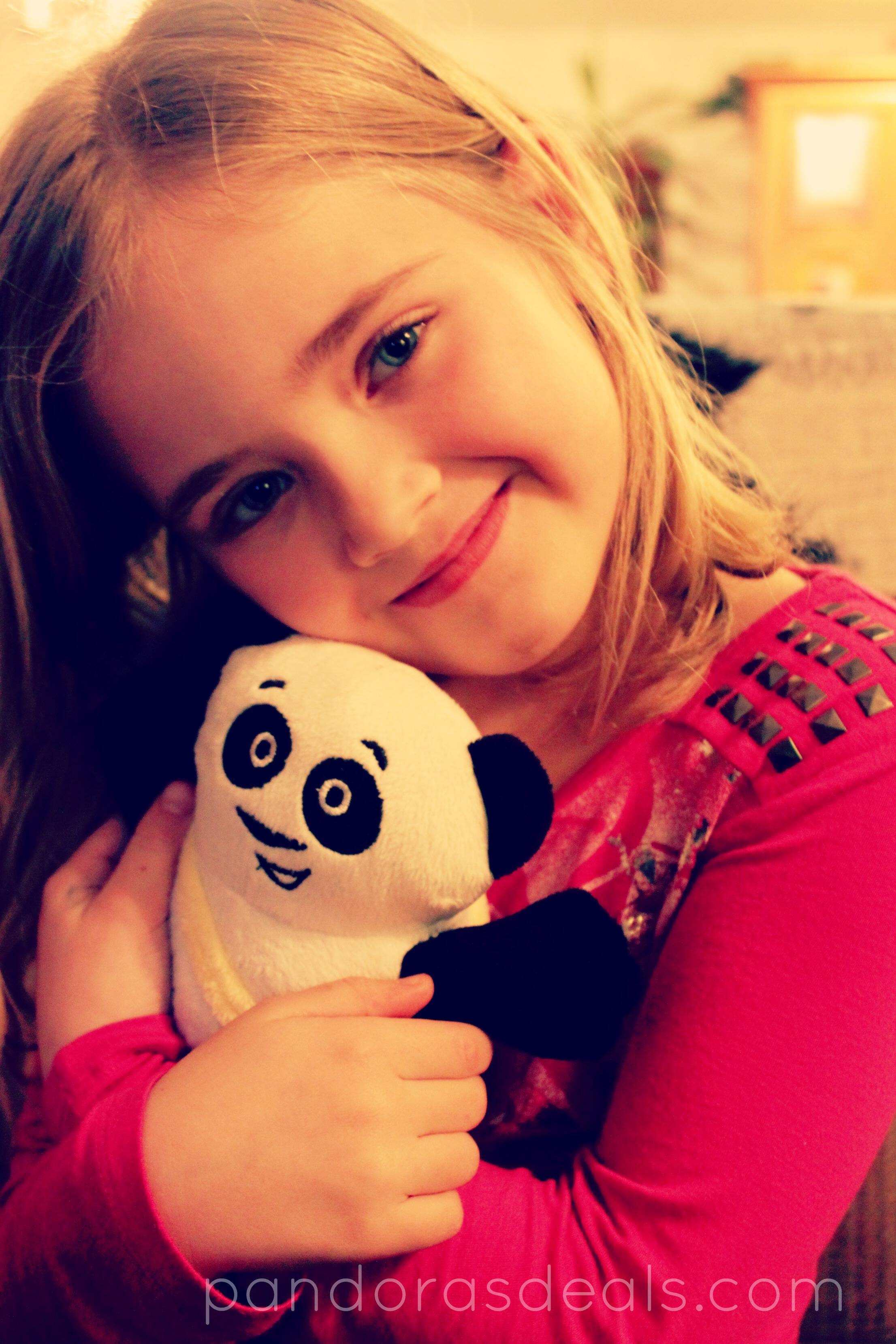 Included in the set is an adorable Little Pim plush panda bear, a DVD, a book, a music CD and a carrying case.  The kids immediately got excited about the panda bear stuffed animal.  My daughter adopted him as her own (yay, they didn’t even fight about it!).  I think this is a great way to get kids interested in the program.  Once there was a character they liked they wanted to read the book, watch the movie, and listen to the music to learn more about him.

The book is probably my favorite part of the set.  I love books anyway and so do  my kids, and this is a more active way for me to engage in learning with them.  Every page of the book focuses on a different color and the kids get to learn six new color words in Spanish by the end.  This book includes the French word, too!

It’s also interactive with flaps to lift and tabs to pull.  Those kind of books are always favorites around here. My 3 year-old son especially enjoys this book.  One thing I really like is that each Spanish and French word is also written with a pronunciation key.  So even if you don’t speak the language that you’re teaching your child, you can still be their tutor!

We had fun listening to the music CD.  The tunes are really fun and upbeat!  Though I wasn’t familiar with most of them that didn’t stop me from dancing around with the kids.

The booklet that comes with the CD includes lyrics in both English and Spanish so you can understand what each song is about.  Most of the song lyrics are somewhat repetitive which is good reinforcement when learning new vocabulary.  I think that makes it easier for children to actually understand what’s being sung.

Here’s the playlist.  15 songs in all and we really enjoyed them all!

Finally we really liked the video, too!  There’s a repetitive pattern to this, too, which again I think is key for kids learning a new language.  You see the object, you see the Spanish word for the object on the screen, you see the object again in different contexts, and you see the word again.  Connecting the word with the pronunciation with the object over and over again really helps it to sink in.  My kids were saying several new words by the time the movie was over. “Platano means banana, Mommy!”   🙂   All of the items in both the book and the video are familiar, everyday objects for kids which makes it even easier for them to absorb new information about.

We give the Little Pim system two thumbs up. I think having all those different media types reaches kids in different ways: reading a book, listening to music, and watching the video.  Reinforcing learning with more than one method is a great approach when you’re working with kids who, let’s face it, don’t always have the longest attention span! We’ve had this kit for a while now and have watched the movie a few times and read the book a TON.  We put on the music when we’re in need of a fun dance party, too!

Little Pim makes language kits in Spanish, French, Chinese, Italian, German, Japanese, Arabic, Hebrew, Russian, English and Portuguese.  Plus they have digital downloads available for your iPhone, iPad, or iPod.  They’ve even got apps for LeapFrog devices! Explore the Little Pim website to learn more about these awesome early language sets and their teaching methods.  Then be sure to follow Little Pim on Facebook, Twitter, Pinterest and YouTube to be the first to hear about their latest products and promotions!  If you’ve got little kids in your life these language sets are a fantastic investment in your child’s education!  Little Pim has even given us a discount code!  Save 20% off your order  with code LPBLOG through January 31, 2013.

Little Pim is generously offering one of my readers an Intro Gift Set, the same that I received, in the language of your choice!  This giveaway is open to US residents and will end on January 11, 2013.  You can enter to win [HERE].

I was provided with a complimentary  Little Pim Gift Set to facilitate this review.  The opinions in this post are 100% mine.  You can read my full disclosure policy here.