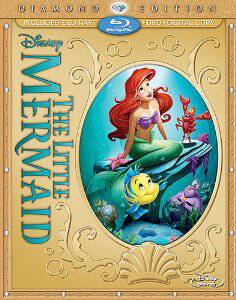 The Little Mermaid is my favorite Disney movie and the brand new Diamond Edition has so many fantastic bonus features.  You probably all know that Jodi Benson is the voice of Ariel and I just love to see her talk and sing. It’s like a real life Ariel!

Jodi recently teamed up with Broadway Inspirational Voices (BIV) to help save music at Mosaic Preparatory Academy, a PreK-6 public elementary school located in the heart of East Harlem in New York City.  Jodi and BIV are both supporters of music in school and recognize the importance of the arts in a well rounded curriculum. While the kids signed, Jodi sang “Part of Your World.”  This is a truly awesome video. Check it out:

Gives me chills and a little lump in my throat.  So fantastic. Way to go Jodi!

The Little Mermaid Diamond Edition is part of your world now!  You can order from Amazon and add it to your family’s collection.  To learn more and stay up to date with all the latest The Little Mermaid news, you can follow along on Facebook and Twitter, hashtag #LittleMermaid.

Founded in December of 1999, Broadway Inspirational Voices is a gospel ensemble comprised of actors performing on and off Broadway. Some of the shows represented are Annie, Avenue Q, Book of Mormon, Cinderella, Kinky Boots, The Lion King, Motown The Musical, Pippin, and Wicked.

The mission of Broadway Inspirational Voices is to raise awareness, provide spiritual support, and to help raise funds for people in need. We lift our voices as a multi-ethnic choir of singers, actors, and dancers from some of the top performers on Broadway, national tours, and regional theatre.