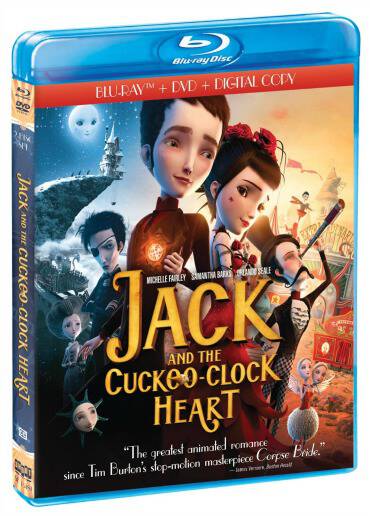 This movie looks SO cute! Jack and the Cuckoo-Clock Heart will be out on Blu-Ray and DVD on October 7.  Read the synopsis below and see what you think!

JACK AND THE CUCKOO-CLOCK HEART is set in the late 19th century Edinburgh, where little Jack is born on a day so cold that his heart remains frozen. Madeleine the midwife saves his life by inserting a cuckoo clock in place of his defective heart. It will work, she warns him, as long as Jack observes three golden rules. First of all, he must never touch the hands of the clock. Secondly, he must control his anger. And last, but certainly not least, he must never, ever fall in love. The moment Jack sets eyes on a young girl singing on a street corner, the hands of his clock-heart begin to race. Desperate to find her again, Jack launches himself into a romantic quest that will lead him from the lochs of Scotland, to the city of Paris and all the way to Andalusia.

We were sent a review copy to share our thoughts with you and just watched it this week. My kids and I really enjoyed it! It’s definitely different, not your typical animated film and it’s rated PG so keep that in mind if your kids are used go G movies. Nothing horrible offensive but it has a bit of a dark feel to it. There are a lot of cool songs in the movie and a really unique story. We loved the characters and overall atmosphere of the movie. It’s very imaginative.  I think it’s best for older kids probably. A really neat animated film adults will enjoy too!

This would be a good one to grab when it comes out and stick it in the Christmas stockings. You can pre-order Jack and the Cuckoo-Clock Heart on Amazon now!