Disney has provided me with an expense paid trip to Los Angeles for the #StarWarsEvent in exchange for my coverage of the events of the trip including a Galavant preview.  No other compensation is given. The opinions and experiences in my posts are 100% mine.  You can read my full disclosure policy here. 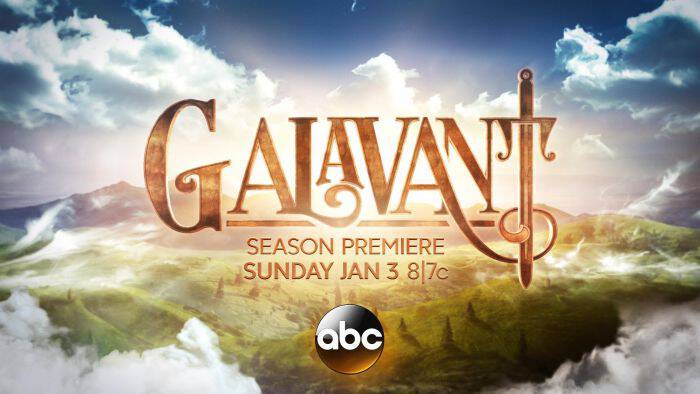 The Galavant Season 2 premiere is tonight, January 3, 2016, at 8pm ET. Are you ready?! I honestly hadn’t watched this show in its first season but got caught up when I found out I was going to have the chance to meet the star of the show, Timothy Omundson (who plays King Richard) and the Producers. It’s SO unique and so funny, and for those of you like me that don’t really watch a ton of TV, this show is only 30 minutes long which makes it a perfect evening treat. I can’t wait for Season 2 to start!

The return of last season’s breakout comedy extravaganza “Galavant” reunites screenwriter/executive producer Dan Fogelman (“Crazy, Stupid, Love,” “Tangled,” “Cars”) with the award-winning musical team of composer Alan Menken (“The Little Mermaid,” “Aladdin,” “Beauty and the Beast”) and lyricist Glenn Slater (“The Little Mermaid,” “Tangled”). Having discovered the dark side of Madalena, our dashing hero’s adventures continue as he embarks on an unlikely bromance with King Richard and fights to rekindle the romance with his true love, Isabella. “Galavant” will premiere on SUNDAY, JANUARY 3(8:00-9:00 p.m., ET) with two 30-minute episodes, back-to-back on the ABC Television Network. The ten episode series will run each Sunday night for five-consecutive weeks. 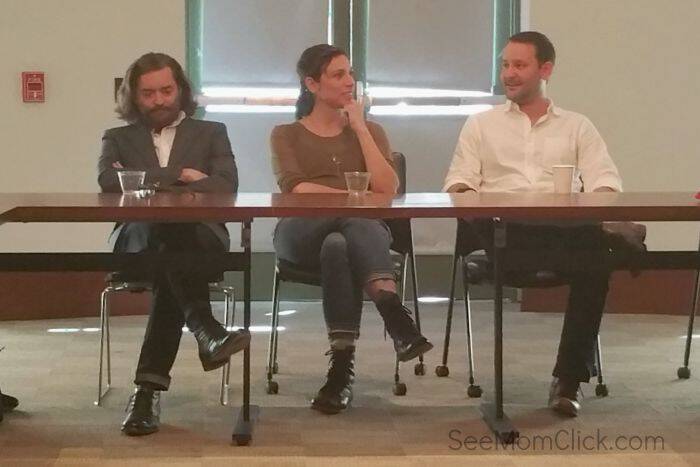 I had the chance to sit with actor Timothy Omundson (left), Producer Kat Likkel (middle), and Producer Dan Fogelman (right) to not only screen the first episode of the new season (it’s hilarious!) but also chat about their inspiration for the show, the music, and more. You might recognize their names!

Timothy Omundson is known for his supporting roles as Sean Potter on the series Judging Amy, Eli on the syndicated series Xena: Warrior Princess, and Carlton Lassiter in Psych.

Kat Likkel is a producer and writer, known for My Name Is Earl, Aaahh!!! Real Monsters, and Sabrina, the Animated Series. 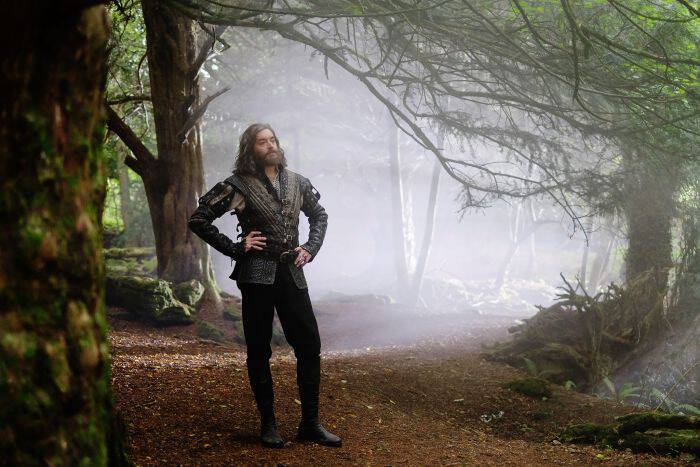 During the interview we talked about a lot of things related to Galavant but there were some general themes of discussion that came up that make this show different from the rest.

On the scope of this project…

There are scenes in Galavant that are HUGE, as in huge numbers of people like nothing you’ve seen before in a show like this. Think about it. Typically in a half hour comedy there’s a core cast and that’s really all you see, maybe a few extras.

Dan Fogelman: We actually just finished filming in Morocco. I think it’s the biggest thing that’s ever been done in a half hour Comedy, and it used 3 armies with hundreds and hundreds of extras. It’s a little massive. I’ve done hundreds of million dollar movies that do not have the scope of what we’re doing, what coming in the latter half of the season particularly. These numbers with the extras and large groups of people singing and dancing. We have, at one point later in the season, a zombie army.

You can imagine what musical numbers look like with that many people! They told us that one day of filming called for 300 extras. Wow!

Galavant is so funny, and in a smart way. Even the song lyrics will have you cracking up!

Dan Fogelman: We want to push the envelope and continue to push it. It’s kind of getting bigger. I think we’re getting sharper comedically.

Timothy Omundson: That’s the great thing about this show and being a part of it. I’ve got kids and there’s stuff they’re not supposed to get and they don’t get. But there’s plenty of humor for me, and for us it’s really a lovely balancing act. I find this writing tremendously funny. It’s everything I love.

Kat Likkel: We use our families in the set up. My husband and I don’t have any children but we have 3 very lovely nephews and so we always run stuff by my sister-in-law to see if they find things funny.

You’ll see what they mean when you watch (if you don’t already).  So many great laughs in this show, and while I probably wouldn’t watch it with my kids (they’re a little young and it’s on past their bedtime), I know they’d find a lot of humor in it, would love the singing, and my daughter in particular would enjoy the whole king/kingdom/princess scenario.

The music is AMAZING! Academy Award winning composer Alan Menken (The Little Mermaid, Beauty and the Beast, Alladin) is pumping out new music for Galavant like crazy and it’s awesome!

Kat Likkel: The basic process is the scripts are written as Alan and Glen are writing the songs. And then at a certain point, Alan does a demo with Alan singing it himself on his computer. And so those will come into us. We have a Dropbox account and you’ll get a ding and a song has come in. If we have any thoughts, which we rarely do, then it goes to the actors and they start learning it and working on it and then they pre-record the song in England.  A lot of our singing is done live. All the actors can really sing so a lot of it is recorded live so that’s why it tends not to look too fake.

Dan Fogelman: Alan Mencken’s done 32 original songs for 10 episodes, which is really the equivalent of 5 Broadway musicals. He’s written 32 songs and we play them in every genre. I wrote the Movie “Tangled” and Alan did all the Music for that and you know, to do a movie that had 6 songs in it, 7 songs in it, took us a year and a half in development. They’re just pumping them. It’s really kind of outrageously ambitious stuff. And by the end, we do have all of the 300 Moroccan extras singing an Alan Mencken song on the March as everyone is going to war.

Timothy Omundson: And then the actor are cast. He’s writing them for us. He’s written songs for me. That’s just an incredible mind twist to get this man, one of the greatest composers of the last 100 years, is actually writing songs with me in mind and my voice in mind.

On this season’s theme…

Along with the humor and the music, there’s a little bit of love brewing on Galavant this year, and maybe in unexpected places! Vinnie Jones plays Gareth, a pretty rough-around-the-edges character who you’d probably not want to run into in a dark alley. And look what’s in store for him in the coming weeks….

Kat Likkel: Vinnie starts falling in love at some point in the season. He’s singing a love song to nobody like a Disney song, like the opening of Beauty and the Beast kind of thing. He’s got a real love story this year.

Timothy Omundson: Because someone tells him they love him and he’s never heard those words before. Vinnie is the ace in the hole. His work is unlike anything I’ve ever seen him do. I’ve worked with him for a year. He’s one of the nicest human beings I’ve ever met.

The character development, it’s just so much fuller this year. Everyone really gets some beautiful opportunities to do some amazing work, and everybody steps up. It’s so nice to see these people you work with, your colleagues, and really care for, do tremendous work. It’s been incredibly satisfying to me.

Kat Likkel: One of the things we decided to do in this season, is take all of our characters and throw the biggest obstacle we could. It’s like we took all of them and we turned their lives completely upside down from where they ended up at the end of last season. If I had to encapsulate what this whole season is about, it’s about love and redemption. It goes big with everybody trying to get to that next step in their lives.

There’s some beautiful, beautiful stuff in there this year.

Timothy, Dan, and Kat were kind enough to pose for a group picture with us. That big TV behind them is the one we watched the first episode of season 2 on!

And Timothy Omundson was kind enough to take time to meet each of us individually. He’s a great guy with a fun sense of humor, and quite a singing voice too! Tune in tonight and get hooked on this really fun show! A half hour worth of laughs is always time well spent!